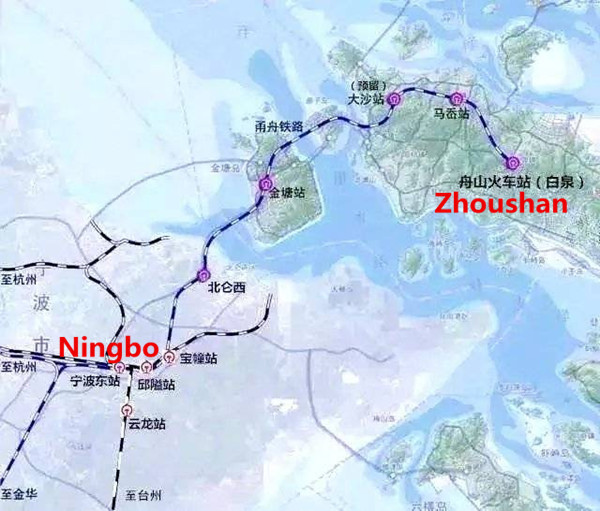 The map of the to-be-built Ningbo-Zhoushan railway with an undersea tunnel shows the route between Ningbo and Zhoushan. [Photo provided to chinadaily.com.cn]

The technical proposal for the Ningbo-Zhoushan Railway, China's first high-speed rail with an undersea segment connecting the Zhoushan Islands in East China's Zhejiang province with the mainland, has been completed, the local Ningbo Evening News reported on Saturday.

After two years' preparation, the core technical proposal for the project's 16.2-kilometer-long undersea tunnel, the longest in the world, passed assessment from a panel of experts headed by Qian Qihu,an academician from the Chinese Academy of Engineering on Friday.

The Ningbo-Zhoushan railway, witha total distance of 77 kilometers, will run through the 16.2-kilometer-long undersea tunnel from Ningbo to Jintang Island in Zhoushan, and over several bridges that cross the sea.

The railway is set to be a railroad project that will facilitate high-speed trains, as well as vehicles. In this project, trains and vehicles would travel across the sea via two separate tunnels.

Notably, the undersea tunnel will boast the world's longest undersea high-speed railway tunnel when it is completed.

Unlikethe 6.7-kilometer-long Hong Kong-Zhuhai-Macao Bridge's underwater tunnel, this underwater passage would be a shield tunnel and placed deeper in the seawater, which creates multiple difficulties for the construction crew.

At a maximum optimal depth of 78 meters with a diameter of 14 meters, the undersea tunnel's shield will reach 10.87 kilometers in length upon completion, setting a new world record, according to Tang Xiongjun from the China Railway Siyuan Survey and Design Group, who is in charge of the undersea tunnel project.

When it is completed, it will shorten travel time between Ningbo to Zhoushan to 30 minutes and to one hour and 20 minutes between Hangzhou, capital of Zhejiang province, to Zhoushan.