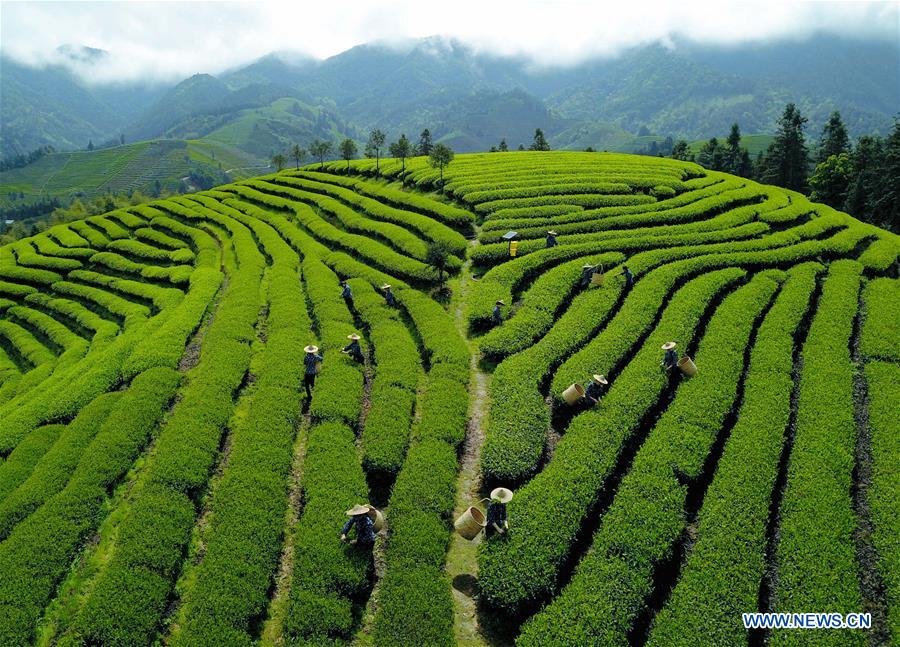 FUZHOU, April 20 (Xinhua) -- Days before tea leaves are ready for plucking, Liu Guoying, a tea master in the city of Wuyishan, east China's Fujian Province, is beavering away at training sessions to teach farmers tea plucking and processing techniques.

Liu, 52, an expert of Wuyi Rock Tea processing technique, always sees a full house during his workshops: sometimes a single lecture can attract as many as 500 local tea planters.

Liu's connection with the tea dates back 20 years, when he was assigned to tea farms to work as one of the first technology counselors in the city of Nanping in the province, helping local farmers improve tea planting and processing techniques.

Liu buried himself in research on tea plantations, trying to uncover reasons for poor yields and low quality of Wuyi Rock Tea.

After years of hard work, he has developed new rock tea planting and processing methods that can efficiently upgrade the industry.

In order to pass on his expertise, Liu has also compiled a pamphlet on Wuyi Rock Tea production and offered it to local farmers and enterprises for free.

His efforts has paid off. The unique oolong tea has become a phenomenal beverage in China's domestic marketplace. Thousands of local farmers cast off poverty by planting and trading Wuyi Rock Tea.

Like Liu, Zhang Xiyou is also a technology counselor who specializes in ecological tea plantations. With tea plucking season approaching, he spends all day patrolling an experimental tea garden of a local tea firm.

Zhang vows not to use any chemical fertilizer or pesticides to produce organic tea, which is much sought after by China's high-income consumers. To control pests, he installs tea garden color plate and pheromone traps in the plantation.

In his experimental tea garden, sprouts are popping out of the ground among rows of tea trees.

"We are testing the interplanting of flowers and tea trees for flowers can both increase yields and add to the beauty of the plantation," Zhang said.

According to Lin Fang, a government official of the city of Wuyishan, around one-third of the latest batch of technology counselors, who range from scientists of top research institutes to local agronomists, are dispatched to tea plantations.

BEYOND FARMS, BEYOND FUJIAN

Hi-tech scientists from top institutions, along with crop specialists of local agricultural authorities, have been sent to villages and factories in rural areas to promote rural development.

Jiayuan, a dairy farm in Nanping, has been equipped with modern facilities such as a fully enclosed cowshed, intelligent ventilation system, and intelligent dry manure cleaning system, with the help of technology counselors from top institutions in Shanghai, Nanjing and Fuzhou.

Wang Zongshou, a farm management expert stationed to the farm, has helped build a wastewater treatment system and a manure workshop, which not only conserves water but also solve pollution problems.

With the renovated sewerage system, the amount of water used on the farm has been reduced by a third. Wang's goal is to develop an ecological farming model tailored to the local situation.

"I am glad that my expertise can make a change. This is the most satisfying thing in my work," Wang said.

The city of Nanping has stationed 9,483 technology counselors to local villages and factories, having helped to lift all registered impoverished residents in the city out of poverty by the end of 2017.

In 2016, the State Council issued a guideline to promote Nanping's practice of technology counselling nationwide as an innovative mechanism for poverty alleviation and rural revitalization.