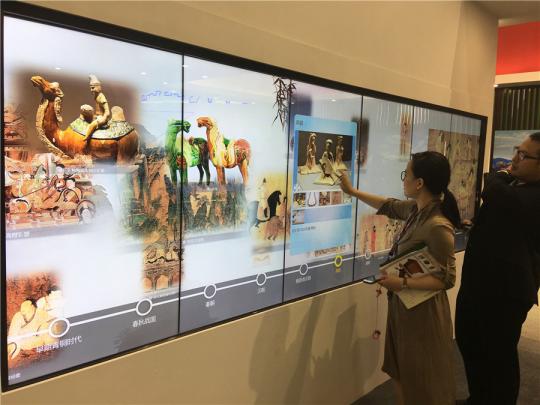 Put on the headset, don the gaming gear and get immersed in a battle powered by virtual reality technologies. This is how Chen Xuyang, a 23-year-old Beijinger, chooses to spend his weekends with friends.

"Unlike computer games, VR-powered games are the real thing, albeit with loads of action and lots of immersive play. I can dodge bullets with my legs instead of running my fingers across the keyboard. It has made my weekends more exciting," Chen said.

While VR technologies have helped create more gaming avenues, other technologies are aiding the revamp of China's cultural and recreational industries, said Song Yangyang, deputy director of the Institute of Creative Industries Technology at the Renmin University of China.

Most of the cultural and related industries across China saw year-on-year growth of 8.2 percent in revenue last year, compared with 10.8 percent in 2017 and 7.5 percent in 2016, said a survey conducted by the National Bureau of Statistics.

Out of the nine cultural and related industries, revenue from the news and information services industry grew 24 percent year-on-year, the NBS said. Meanwhile, growth in the recreational services industry lagged others with revenue contracting by 1.9 percent.

"On the contrary, recreational services surveyed by the NBS refers to offline ones such as karaoke and amusement parks, where demand dropped as more consumers started opting for digital content," Wei said.

According to Wei, such a divergence reflects the tech-driven restructuring of China's cultural industries - cultural industries integrated with digital technologies have seen high growth, while some traditional ones have slackened amid economic slowdown and changing consumer preferences.

Looking ahead, Wei said technology will continue to restructure and upgrade China's cultural industries, with 5G technologies set to be a game-changer.

"With breakthroughs in 5G technologies, other technologies such as VR and augmented reality will also see broad applications. This may enable consumers to use VR headsets at home to experience the same visual and sound effects as in movie theaters, bringing about great potential in online movie consumption and reforms in the movie theater industry," Wei said.

The Palace Museum said recently that sales of creative art products reached 1.5 billion yuan ($221 million) in 2017, about 50 percent higher than in 2016.

Overall, the cultural industries are expected to see high-quality growth in the coming years, said Zhang Meng, a professor with the Southwestern University of Finance and Economics in Chengdu, Sichuan province.

"Cultural industries now account for more than 4 percent of the country's gross domestic product, but their role in economic upgrading is more substantial than this figure - they are helping with the upgrade of other industries," Zhang said.

Zhang exemplified that cultural elements are shaping the core competitiveness of the travel industry, and cultural industries are ideal trial grounds for technology applications.

Recently, China rolled out a slew of policies to support the development of cultural industries, including a favorable financing environment and tax exemption.

On Dec 25, the State Council announced the country will encourage qualified cultural enterprises to get financing on the upcoming science and technology innovation board. Cultural enterprises that are transformed from public institutions will not need to pay corporate income tax within five years after the transformation, it said.