CHINA Temple of Heaven will open another 2.24 hectares to the public

Temple of Heaven will open another 2.24 hectares to the public 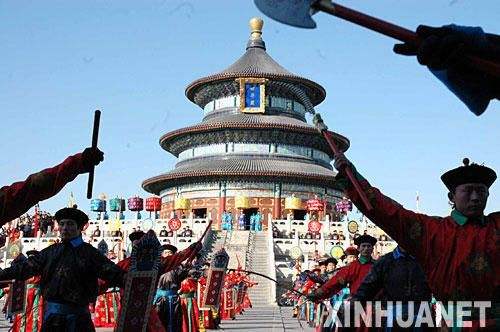 The Temple of Heaven (Photo: Xinhuanet)

2018 marks the 20th anniversary of the Temple of Heaven, Tiantan, an ancient royal altar in Beijing, being listed as a UNESCO World Cultural Heritage Site.

According to the Beijing Municipal Administration Center of Parks, the south inner wall of the temple and the Guangli Gate are currently under renovation. A total of 2.24 hectares of the heritage site are going to open to the public after households are relocated from within the temple district.

The whole temple complex is surrounded by two walls which have been repaired and rebuilt many times over the last century, to restore the historical features and integrity of Tiantan.

According to the new renovation plans, walkways will be constructed around the temple to create a circular visiting area. The site of the ancient imperial path will be restored as a green area for visitors to enjoy. Thanks to the renovation, non-historical and construction areas will be reduced by 5,171.6 square meters, and green areas will be increased by 20,000 square meters.

The temple district covers 273 hectares, 72 hectares of which are occupied by different organizations and residents. Authorities plan to relocate 19 households within the year in order to better protect the historical site.