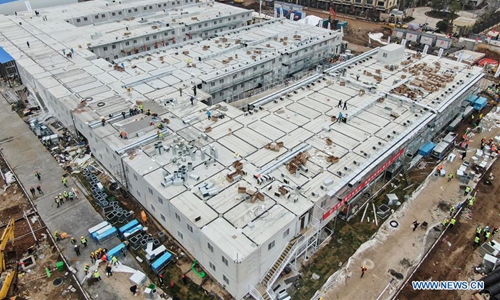 Aerial photo taken on February 2 shows the Huoshenshan Hospital, which was built in 10 days and put into operation on the same day to fight the novel coronavirus pneumonia, in Wuhan, Central China's Hubei Province. (Photo: Xinhua)

Temporary treating centers converted from public facilities have played a key role in curbing the spread of the novel coronavirus in Wuhan, the central Chinese city at the epicenter of the epidemic outbreak, a medical expert said.

The experience in setting up temporary hospitals in Wuhan should be drawn on in the future and could help other countries fight the pandemic of COVID-19, Wang Chen, a respiratory disease specialist and vice president of the Chinese Academy of Engineering, told Xinhua in a recent interview.

The hospitals were converted from public venues such as exhibition centers and gymnasiums in early February in an effort to treat patients with mild symptoms and isolate the source of infections amid strained medical resources.

Over more than a month, the 16 temporary hospitals have received more than 12,000 patients until the last two of them were shut down Tuesday as the city sees more patients recover and a sharp drop in the number of new infection cases, according to Wang, who has been fighting the virus in Wuhan for over 40 days.

The temporary hospitals were set up in Wuhan at the grimmest moment of its fight against the virus, when medical institutions were overwhelmed by an influx of patients and over 10,000 infected patients were unable to receive proper medical treatment, Wang said.

Under the principle of "leaving no patients unattended" established by Chinese central authorities, these hospitals have performed three major functions -- isolation, treatment and monitoring, Wang said.

"These hospitals can keep patients under quarantine to block household and social contacts, offer proper treatments to patients with mild symptoms and monitor their conditions in case of exacerbation," he added.

"One of the characteristics of COVID-19 is that most patients have mild symptoms, but they need proper treatments to avoid possible exacerbation. And the key is to keep them isolated to stem the spread of the virus," said Wang, explaining why temporary hospitals are important to curbing the epidemic in Wuhan.

But Wang noted the temporary hospitals in Wuhan are not permanently shut down but "standing by" and "staying alert" for some time to be on the safe side.

"Because we still don't have the complete knowledge of how the virus spreads and how it causes the disease," he said.

Wang said an urgent and key task at the moment is to conduct epidemiological investigations on nucleic acid and serum antibodies.

"Nobody knows whether COVID-19 will vanish like SARS or exist in the world like flu, but such investigations will give us the answer and help make scientific decisions on future prevention and control," he said.