This year marks the 99th anniversary of the founding of the Communist Party of China (CPC).

Xi has been fulfilling this original aspiration and set a good example for other CPC members. Here are 10 anecdotes that reflect this.

"I am a servant of the people."

In November 2013, at Shibadong village of Hunan Province in Central China, Xi visited villager Shi Pazhuan. Not knowing how to read or speak formally, Shi asked, "How should I address you?" "I am a servant of the people," Xi answered as he held Shi's hands. Learning Shi was 64 years old, Xi said, "You are my older sister." 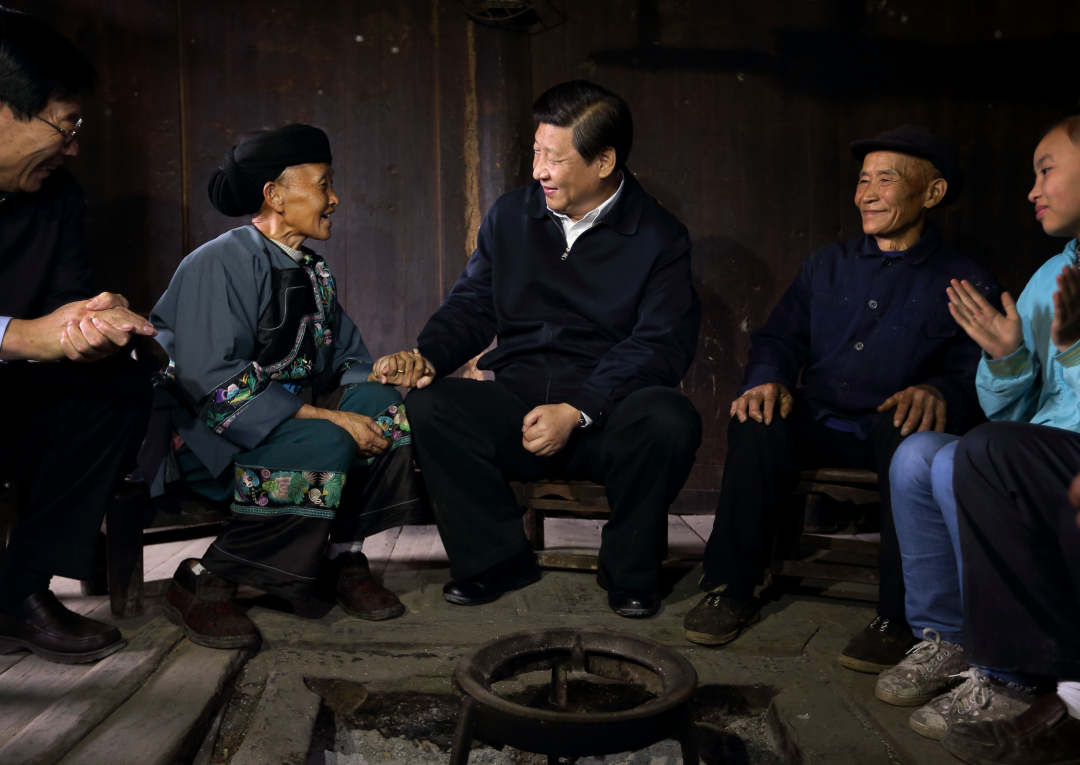 At Shibadong village, Xi and villagers gathered together to discuss the strategy of getting rid of poverty and becoming rich. It is at Shibadong village that Xi first put forward the idea of "targeted poverty alleviation," providing a "golden key" for tackling poverty.

"Don't stand over there. Come and sit down next to me."

On November 17, 2017, in the Golden Hall of the Great Hall of the People, Xi met with more than 600 delegates participating in the National Spiritual Civilization Commendation Conference.

Huang Xuhua is the chief designer of the country's first-generation nuclear submarines and Huang Dafa, a village leader in Zunyi, Guizhou province, spent more than 30 years leading villagers' efforts to chisel about 10 kilometers of irrigation channels into the vertical sides of three karst mountains.

Xi then took their hands and greeted them with a smile, saying, "Don't stand over there. Come and sit down next to me." The two insisted on declining. Xi invited repeatedly and said, "Come here. We all squeeze up, there'll be enough room."

"Don't fear long roads, even if you visit only one place a day."

On April 15, 2019, Xi inspected a mountainous village in rural Chongqing. 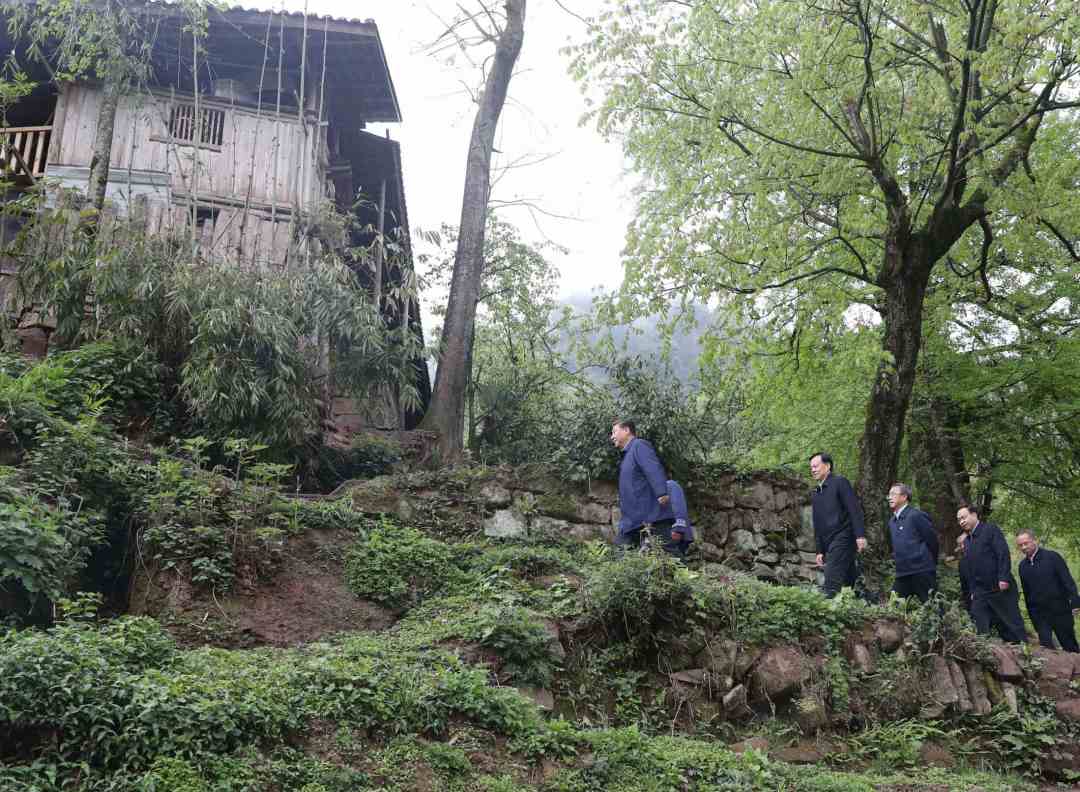 After climbing the zigzag path and slippery stone steps, Xi came to the home of Tan Dengzhou, who lived in poverty. Xi touched Tan's quilt, feeling the thickness, inspected the storage of food, and observed the house from inside to outside. Xi also sat with the poor members of Tan's village and chatted with them.

This scene is familiar. Since the 18th National Congress of the Communist Party of China, Xi's inspection tours to impoverished areas spanned across the country, and distance cannot stop his determination to "see and help real poverty with concrete efforts.”

"[I] don't fear long roads, even if I can visit only one place a day. I must see the real poor. Only by seeing the real situation of poverty in China can we make the right decisions," Xi said.

"Seeing this scene, my heart broke."

Xi is concerned about the livelihood and living condition of the people.

On March 8, 2017, Xi attended the deliberations of the Sichuan delegation to the fifth session of the 12th National People's Congress.

"Last year, the cliff village in Liangshan prefecture was reported in the media. On seeing that the residents and children [of the village] needed to use a rattan ladder on the cliff to reach the outside world all year round, my heart broke," Xi said.

"Not long ago, I learned that a new steel ladder was built. I then felt a little relieved."

At the meeting, he stressed that the central government would increase support for poverty alleviation in Sichuan.

"I am angry that some poverty funds are misappropriated."

Seeing some villagers in the old revolutionary areas living a difficult life, Xi felt heavy. He told them that the government would make all efforts to let the villagers live a better life as soon as possible. "I'm discontent and even angry that some poverty alleviation funds are withheld by authorities at different levels for other purposes," he said.

He urged officials to address the misconduct, correct chaotic situations immediately and prevent their reoccurrence.

"Toilet problems are not trivial."

During the Two Sessions in 2019, Xi had extensive conversations and exchanged ideas with lawmakers about the issue of rural toilets.

"Do you have flush toilets or still use pits?" Xi asked a rural deputy from Inner Mongolia delegation. Xi wanted details about how a toilet upgrading program has been going in the countryside.

During discussion with deputies of the Fujian delegation, when Xi was told that the residents in Changkou village in Gaotang township of Jiangle County where he visited have all got flush toilets, he was pleased.

He stressed that rural toilet renovation should follow local conditions.  When speaking to Henan delegation, he said, "It is not practical to promote flush toilets where there is a lack of water."

The construction of clean toilets is an important part of pushing urban and rural development, Xi said in an earlier instruction.

"It was supposed to be a good Spring Festival holiday for you, but the situation of the epidemic is so urgent that I have to summon you together to study and make new arrangements," he said with a solemn expression.  "I could not fall sleep last night." The meeting ended with the decision to set up a CPC Central Committee leading group to oversee epidemic prevention and control work.

Xi worried about the epidemic in Hubei and Wuhan all the time, and gave more than 100 important instructions to the central leading group.

Health and safety should always be a top priority and the government should take epidemic prevention and control as the most important task, Xi said.

"Protect people's lives and health at all costs."

The CPC is willing to protect people's life and health at all costs, as it always puts people's interests first, President Xi said.

On May 22, 2020, Xi attended a panel discussion with fellow deputies from the delegation of the Inner Mongolia Autonomous Region, at the third session of the 13th National People's Congress.

Speaking of epidemic prevention and control, Xi stressed that China would never give up saving patients regardless of age or condition.

The eldest patient to have been cured is 108 years old, Xi said.

China mounted swift and sweeping actions to contain the disease. It mobilized the best doctors, most advanced equipment and high-demand resources, and bore all costs of medical treatment.

"Life is of paramount importance. This is a price we must pay, at any cost,"  he said,  adding that the Party should endeavor to improve people's livelihood.

"Our Party comes from the people and is rooted in the people," he stressed.

"Tiring, but it makes me very happy."

On March 19, 2013, at the Great Hall of the People in Beijing, President Xi gave a joint interview to media from BRICS countries.

"Much work needs to be done to meet people's daily necessities, ensure smooth running of society and normal functioning of state organs, and build and manage the governing Party. As the people have put me in this position, I must always put the people first and keep in mind the deep trust they have placed in me and my heavy responsibilities," Xi said when asked about what his daily work and life is like. According to insiders from the General Office of the CCP Central Committee, requests asking for Xi's instructions are always responded to promptly, even if they are sent to Xi at midnight.

According to media reports, the schedule of Xi's visits is often accurate to the minute, and it is quite usual for him to work in an intense manner.

"My job is to serve people, very tiring, but it makes me very happy," Xi once wrote in a letter.

"Put aside my own well-being for the good of my people."

"I will put aside my own well-being for the good of my people." This is a statement made by Xi when answering a question from Roberto Fico, president of the Chamber of Deputies of Italy, in Rome on March 22, 2019.

After a meeting with Xi, Fico raised an unplanned question: "What did you feel when you were elected Chinese president?” It's a heavy responsibility and an arduous task to be Chinese president, Xi replied.

Xi said he would like to be selfless and is determined to devote himself to serving the Chinese people and China's development.

An athlete can improve his performance significantly through rigorous training. Similarly, he believes he can make the country a better place with the huge support of 1.3 billion Chinese people, Xi said.

"Putting aside one's well-being for the good of the people" has also become a spiritual pursuit for every CPC member.