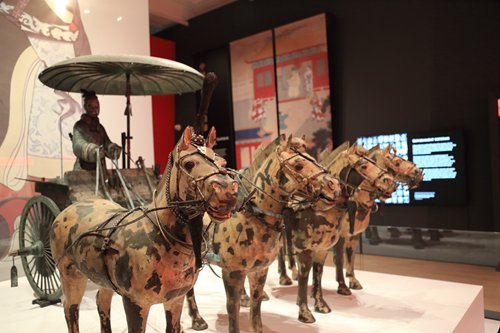 Ten life-size figures, including a terracotta cavalry horse, are on display as the most important part ofChina's First Emperor and the Terracotta Warriors exhibition at World Museum in Liverpool. Photo: Courtesy of Jiang Shan Ten life-size figures, including a terracotta cavalry horse, are on display as the most important part ofChina's First Emperor and the Terracotta Warriors exhibition at World Museum in Liverpool. Photo: Courtesy of Jiang Shan

China's First Emperor and the Terracotta Warriors exhibition opens at the World Museum in Liverpool on Friday.

About 450,000 visitors are expected to attend the exhibition, which has over 100,000 advance ticket sales and school group bookings, making it the most successful pre-opening at the museum. The museum will also send out 20,000 tickets to local primary and secondary schools.Liverpool has the largest number of Chinese students in Europe and has played a significant role in the history of China-UK contacts. In 1834, the first merchant ship from China arrived at Liverpool Pier, bringing the first modern wave of Chinese immigrants to Europe. "Once again, these ancient warriors have come through thousands of years and crossed boundless oceans to reach the shores of the British Isles," Chinese Ambassador to the UK Liu Xiaoming said at the opening ceremony. Soldiers undergoundThe life-sized army was discovered in March 1974 by seven peasants digging a well together on a communal farm in the village of Xiyang, about an hour out of  Xi'an in Northwest China's Shaanxi Province. It was the fifth day of digging when the team stumbled across a strange layer of unique red soil about 2 meters underground.Little did they know they were about to unearth the most priceless archeological discovery of modern times: 8,000 soldiers and horses secretly guarding the tomb of China's first emperor, Qin Shihuang. Materials from museums and institutes from across Shaanxi Province, excavated over the last 40 years from the imperial mausoleum and selected tombs, have been shipped to Liverpool for the show.For the 10 figures on display, the 1,200-square-meter museum gallery has been transformed into a dark and dramatic historical space. The exhibition features 125 artifacts including weapons, armor, architecture, jewelry and royal artifacts."The Terracotta Warriors exhibition is surely one of the most important exhibitions we have ever held here," said National Museums Liverpool director David Fleming. Founded in 1851, Liverpool World Museum is one of nine Liverpool museums. Together they received 3 million visitors in 2017. "We cannot wait to share this spectacular show with the city's people and welcome visitors from across the UK to witness this unmissable opportunity to see some of the Terracotta Army up close," he said.The exhibition includes objects never before seen in the United Kingdom that can shed light on the Emperor's pursuit of immortality and his preparations for the afterlife.The warriors have exhibited three times in the UK: The last show in 2007 was seen by 850,000 visitors, second only to the groundbreaking 1972 Tutankhamun exhibition. Understand Qin DynastyUnlike the British Museum exhibition, Liverpool focuses more on pre-unification Qin kings (307-221BC) and the first emperor's legacy for the Han Dynasty (206BC-220AD), spanning almost 1,000 years of Chinese history."Putting the Qin Dynasty, which is rather short, into its historical context will help visitors better understand that period of Chinese history," Wu Haiyun, project manager at Shaanxi Cultural Heritage Promotion Center, told the Global Times.He hoped the exhibition would inspire people to visit China, Wu said.The warriors were unearthed in Chang'an, the old name for Xi'an and the eastern starting point of the ancient Silk Road, Ambassador Liu noted. "The relics from the past remind us of the glory of the ancient Silk Road," he said. "Their display here in Liverpool, thousands of miles away from home, is a fresh testament to the vitality of the new Silk Road."During her visit to China earlier this month, British Prime Minister Theresa May spoke of a "golden era" of exchange and cooperation between the two countries. In this sense, the Liverpool exhibition can be regarded as an impressive first step."The Terracotta Warriors are an iconic cultural treasure produced by ancient China. Bringing them to Liverpool is a real testament to the strength of the UK-China cultural relationship," said British Culture Secretary Matt Hancock. Organized by the Liverpool World Museum, Shaanxi Provincial Cultural Relics Bureau and Shaanxi History Museum, the exhibition runs until October 28.