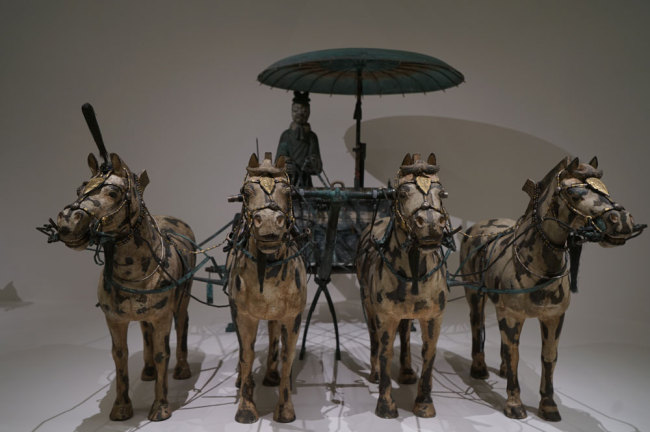 Terracotta Warriors: Guardians of Immortality is shown at a preview event on Thursday, May 23, 2019, in Melbourne, Australia. [Photo/China Plus]

Some of China's famed Terracotta Warriors are now on exhibit in Melbourne. It's been almost four decades since the ancient relics last went on display in the city.

The exhibition is part of the Melbourne Winter Masterpieces, an annual event that shows artworks from around the world. The new exhibition at the National Gallery of Victoria, the NGV, is on a much larger scale than the previous showing of these well-known Chinese relics.

Sasha Grishin, an art historian from the Australian National University, traveled from Canberra to Melbourne for the chance to see these sculptures again up close. He was here when the Terracotta Warriors came to Melbourne back in 1982.

"In 1982, when the Terracotta Warriors came, that was already a very long time ago. And we had a different perspective on China. It was exotic then. Here we're looking not at the exotic, but we're looking at important art. And we're seeing China not as something out there, but China as being part of the global art community. And seeing it in the context of very important contemporary Chinese art, that's a very important development," said Sasha Grishin.

Zhou Kuiying is the deputy director of the Cultural Heritage Administration of Shaanxi Province, the home of the Terracotta Warriors. He said the exhibition can play a role in building cultural ties between China and Australia.

"Over more than 30 years, we have discovered many artifacts in China, including more Terracotta Warriors. Many of the sculptures and artifacts here today are part of the new discoveries. We hope exhibits like this will help Australians, especially young people, to understand ancient Chinese culture, and the China of today, as this can strengthen mutual trust and friendship between Chinese and Australian people," said Zhou Kuiying.

Alongside the Terracotta Warriors exhibition, the NGV is also showcasing works by the contemporary Chinese artist Cai Guoqiang. One of the highlights is an installation containing 10,000 porcelain birds, which seeks to create a scene at Mount Li where China's first emperor Qin Shihuang and his warriors were buried.

Wayne Crothers is the senior curator of Asian art at the NGV. He hopes that the two exhibitions, which contrast ancient and modern Chinese art, can create a dialogue that will inspire the public.

"We saw them as being a wonderful sort of two exhibitions to be brought together in a dialogue with each other. And also we wanted to inspire the visitors not just to view the objects as historical pieces. We wanted to let them be inspired by a great sort of contemporary mind which works in conversation, in dialogue with the historical pieces. And allow the public to be inspired and create their own type of feelings, experiences and understanding of Chinese culture itself, both past and present," said Wayne Crothers.

The organizers are looking to attract a broad audience with these exhibitions. And it is especially keen to draw in members of younger generations.

With this in mind, in the gallery's gift shop are Terracotta Warrior-themed poker cards, books specially designed for children, and more. The exhibition opens to the public on May 24 and will run until October.