China is considering dispatching a medical team to Spain, Yao Fei, the Charge d'Affaires of the Chinese Embassy in Spain, said in an exclusive interview with the Global Times, stressing that the cooperation on medical and public health between China and Spain will not be hindered due to the "substandard" test kits incident. 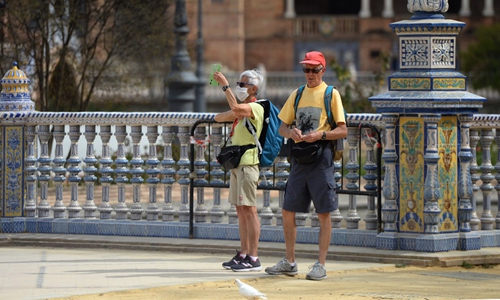 A tourist wearing a protective mask takes a picture at Plaza ESpana in Seville, on March 11, 2020. (Photo: AFP)

Spanish media reported in late March that a batch of rapid screening kits for the novel coronavirus purchased from China had an accuracy of only 30 percent, which was far from the required 80 percent. The report came after the country announced it had bought $467 million in medical supplies from China, which stirred a wave on social media platforms.

The Chinese Embassy in Spain clarified that this batch of test kits had nothing to do with the large Chinese and Spanish purchase agreements. The company that provided the COVID-19 test kits to Spain did not get the license from China's authorities on medicine to sell its products, the embassy said.

The test kits were produced by Shenzhen Bioeasy Biotechnology based in South China's Guangdong Province. The company claimed on its WeChat account that the low sensitivity of the test kits used in Spain was probably due to the users not following the instructions properly in the process of taking samples.

The company also said that the Spanish Health Ministry decided to extend their contract with the company and order a new batch of products.

However, the arrival of the new rapid test kits is now in question as China has further strengthened regulations on the quality and process of exports ranging from masks to test kits.

China's State Administration of Market Regulation announced on Wednesday that China will crack down on illegal acts such as falsifying and selling certificates by agencies who issue papers for domestic producers of masks, protective suits and other medical supplies for export, in a bid to enhance the effectiveness of certification and normalize market behavior.

According to the El País report, the Spanish health authority has not answered the question of how long it believes that the arrival of these 640,000 test kits will be delayed.

Yao said the incident was caused by blind interpretations made by some media outlets. China not only assisted Spain with a large amount of medical supplies, but also opened doors for Spain to import materials and equipment.

Most of these supplies have no problems and played an active role in fighting the epidemic in Spain, Yao told the Global Times, stressing that "I hope that people can trust and respect China's goodwill in helping other countries and stop politicizing exported materials."

"China wants to help Spain sincerely," Yao said, noting that China will continue to support qualified and reputable enterprises to export supplies to Spain and provide convenience for Spain's procurement in China in all aspects of production, transportation and customs clearance.

"Strengthening medical cooperation and jointly safeguarding the lives and health of the two peoples and international public health security is an important consensus between China and Spain, and will not be reversed by individual episodes," the Chinese diplomat said.

Recently, some media outlets and politicians have spared no effort to concoct issues on various topics in an attempt to stigmatize China, but this kind of trick will not help the global anti-epidemic situation, nor will it be possible to reap the hearts of the people, Yao said, stressing that "in fact, we (the embassy) receive letters from Spanish people from all walks of life every day, who thanked China for its help during the crisis, and hoped that Spain and China could work together to overcome the virus as soon as possible."

The epidemic situation in Spain has been worsening rapidly since March. The first case of COVID-19 in Spain was reported on February 1. Since then, the country has reported 131,646 cases and 12,641 deaths as of Monday. It has the second highest number of confirmed cases in the world after the US. According to local media reports, the country's infection rate among medics is also very high, which accounts for about 14 percent of the total infected number.

There are several reasons behind the situation. Yao said the spread of the epidemic has exceeded expectations, and a large number of cases have emerged, which has suddenly brought huge pressure on the Spanish medical system.

Second, the aging problem is also prominent in Spain. The proportion of elderly people over 65 accounts for nearly 20 percent of the national population. Especially in the early stage when collective infection occurred in nursing homes, it pushed up the mortality rate of local patients.

Third, the masks, protective suits and goggles in some hospitals were in short supply, which led to an increased risk of infection among medical staff.

According to Yao, as of Sunday, a total of 90 Chinese citizens were diagnosed in Spain with one death and 11 recoveries. The Chinese Embassy in Spain is paying attention to the diagnosis and treatment of the confirmed cases, tracking their situation, and setting up a special WeChat group for them, inviting eight domestic doctors to answer their questions.

In addition, the embassy has also set up a special hotline to receive calls and letter consultations, easing the panic among the local Chinese people. The embassy also took domestic measures against the virus. For example, public areas in the embassy are disinfected twice a day and some employees are allowed to work remotely.