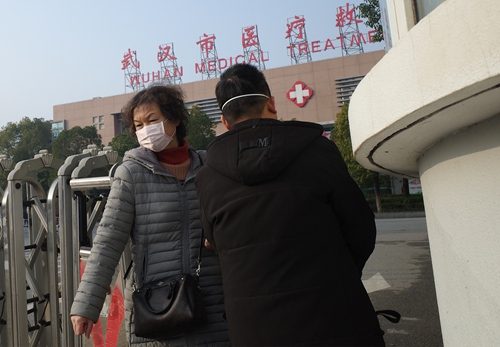 A Chinese traveler to Thailand confirmed infected with the new coronavirus, which was first discovered in Wuhan, Central China's Hubei Province, is recovering from the illness, according to the World Health Organization (WHO) China.

The traveler from Wuhan was identified as a potential sufferer by Thai officials on January 8 and hospitalized, WHO said in an email to the Global Times on Tuesday.

Laboratory testing subsequently confirmed that the novel coronavirus discovered in Wuhan was the cause, according to the email.

WHO on Tuesday refuted some media reports that had seemingly cited WHO as an authority suggesting the virus can be transmitted human to human.

There was no clear evidence of human-to-human transmission, the organization told the Global Times, and no infections were reported among healthcare staff.

"The mode(s) of transmission has not yet been determined and human-to-human transmission is always a concern when patients have respiratory symptoms," an unnamed WHO representative said in the email to the Global Times. "This requires further investigation."

The possibility of cases being identified in other countries was not unexpected, WHO said in a statement on Monday, noting that they are working with officials in Thailand and China.

Chinese experts have shared the whole gene sequences of the virus with WHO, which is of great importance for developing specific diagnostic kits, the Xinhua News Agency reported on Monday.

Gauden Galea, WHO representative in China, highlighted China's quick reaction to the epidemic in an interview with CCTV.

"China has identified the novel virus, completed the gene test and set up diagnosis standards as of Saturday," Galea said. "It indicates that the country has improved rapidly in this field after the outbreak of SARS in 2003."

WHO does not recommend specific health measures for travelers and advises against any travel or trade restrictions on China based on the information currently available, Galea said.

China identified a new coronavirus on January 9 after 59 people were hospitalized, with seven in serious condition for an unidentified pneumonia.

Most of the patients worked in a seafood market in Wuhan, Xinhua said, citing WHO.

One patient had died as of Monday, according to the Wuhan health authority. The death was caused by another serious illness rather than solely the pneumonia, Xinhua said.

Meanwhile, 687 people who had been in contact with the patients are under medical observation, the authority said.

Forty-one patients hospitalized for the unidentified pneumonia in Wuhan have been confirmed as being infected with the new coronavirus as of Saturday, Hu Ke, a respiratory expert from the Hubei General Hospital told CCTV.

Seven patients have been discharged from hospital. Patients were discharged after their fever broke, organs restored their normal function and a pathogen test confirmed a negative result, Hu said.