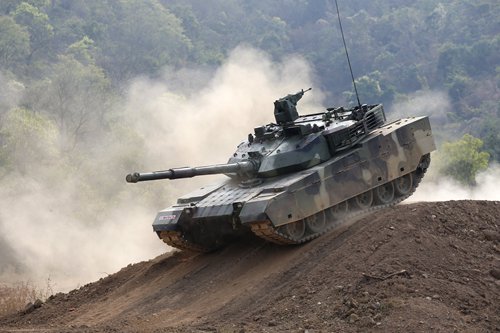 The Royal Thai Army conducted tests of the China-built VT4 main battle tank, also known as the MBT3000, on Friday at the Royal Thai Army Cavalry Centre at Adisorn military camp in Saraburi. Reporters were there to witness the tests take place. The capabilities of the VT4, built by China for export, were on full display during the press open day, and won high praise from the Thai army. The commander at the Royal Thai Army Cavalry Centre told the press that the tank VT4 integrates the advantages of world-class advanced main battle tanks with a high level of informatization, maneuverability and firepower. The Royal Thai Army displayed the tank in early January after China delivered it in October, 2017 and held the press open day at the end of January. Some media commented that the test had grabbed the world's attention.Thailand has purchased 28 VT4 tanks and its cabinet has approved the repurchase of 10 additional tanks from China, with the number of orders likely to continue growing. The tanks are produced by China North Industries Corporation (NORINCO).Of the 28 VT4 tanks, 26 were commissioned by the 3rd Cavalry Division in Khon Kaen Province, while the other two were delivered respectively to the Royal Thai Army Cavalry Centre at Adisorn Military camp in Saraburi and the Army Armory Hall.  Ready for battleDuring the press open day, the VT4 showed its strong maneuverability by making a 30% gradient climb, navigating through water and coming up from a ditch. The army told reporters that the capability of the 1200-horsepower engine could not be fully tested as it is new. The tank also carried out shooting tests of both ground and aerial targets. With a 125mm smoothbore gun, the VT4 was able to shoot armor-piercing fin-stabilized discarding-sabot (APFSDS), high explosive anti-tank cartridges and artillery missiles. The longest range of the artillery missiles was 5 kilometers. The VT4 is equipped with a stabilized fire control including cooled thermal imager sights for commander and gunner. It is also fitted with roof-mounted panoramic sights and a digitalized gun control system, capable of detecting, following and shooting targets in the day or night. The Royal Thai Army told reporters that "the VT4, equipped with stable main armaments and a strong power system and control system, is much easier to handle and comparable with US-made tanks." The battalion commander of the 6th Royal Thai Army Cavalry also praised the advanced capability of the tank and said soldiers have become familiar with it, adding that the more they use it the more they like it. Equipped with a China-made 1200-horsepower diesel-fuelled engine and a hydromechanical drive system, the VT4 can run at a maximum speed of 70 km/h and a maximum cross-country speed of 50 km/h. When Thailand imported the 28 VT4 tanks from China in 2017, media compared it with the T-84 Oplot-M from Ukraine, but the outstanding capabilities of the VT4 prompted Thailand to purchase the Chinese-made tank. Once they are all commissioned, Thailand will possess one of the strongest armored forces in Southeast Asia. Staff from NORINCO told the Global Times that China displayed a new GL5 Active Protection System (APS) designed for main battle tanks during a show in August 2017, and customers can have the system fitted on the VT4 if they require. After-sales serviceAccording to media reports, Thailand plans to eventually purchase a total of 49 tanks in three batches. The Thai cabinet approved the purchase of 10 VT4 tanks for the second batch in April 2017, replacing the old US-made M-41s. The Thai army has been using the M-41 since World War Two. Thai Army chief General Chalermchai Sitthisart said China and Thailand will build a repair and maintenance center together to ensure the production and maintenance of its accessories. Many commentators believe this is an important reason why Thailand purchased China-made tanks, and that the center will serve the whole of Southeast Asia. Although weapons from the West are more modern, they tend to be more expensive. Taking price into consideration, Sitthisart said the China-made tanks are cheap and good for investment, establishing long-term relations with China and developing the Thai weapons industry. The Thai government's purchase of the China-made tanks has been given extensive coverage by the Thai press, including Matichon, Tnews and Bangkok Post, and it has received support as well as opposition from the public. Some netizens voiced their suspicions on Bangkok Post, saying the tanks could be used by the army for a military coup. But supporters said the "China-made tanks are only a third of the price of American or German made tanks. China will share maintenance and production technology but the West won't."