In his teenage years, thangka master Norbu Sidar recited vast sutras from Buddhist scriptures, and also made sure that his nephews Konchoge and Tsering did the same.

Born into a family of thangka painters in Shigatse, a city in the Tibet autonomous region, they are following in the footsteps of their ancestors to continue the craft.

Thangka is a Tibetan Buddhist scroll painting on cotton or silk, which is painted with mineral and organic pigments derived from coral, agate, sapphire, pearl, gold and other materials so that the colors last for centuries. The art form dates back to the 10th century and paintings typically depict Buddhist deities. 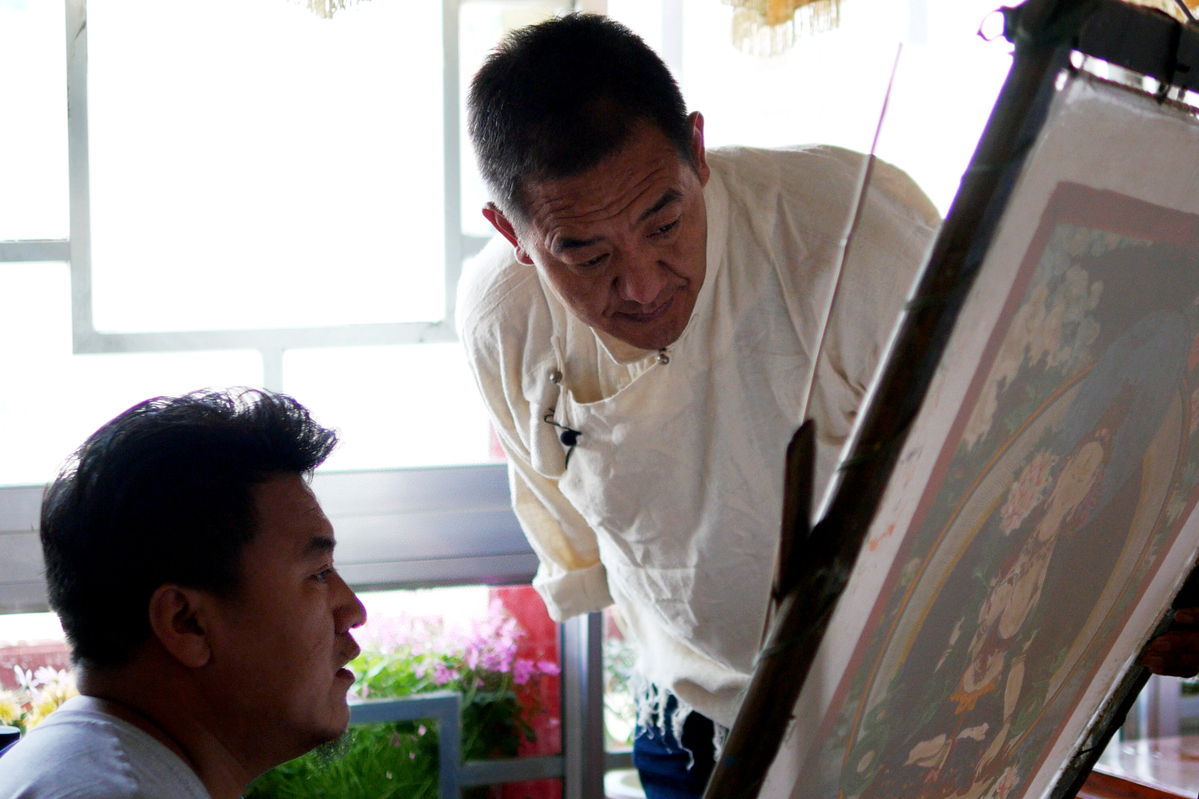 Norbu Sidar is a renowned master at the Mensar school in Tibet. Mensar is one of four thangka schools, which focuses on the elaborate details in Buddhist images, landscapes, animals and garments.

He is the head of the Tibetan Thangka Academy in downtown Lhasa, which offers free classes to interested applicants, particularly those poor but talented apprentices from his hometown of Shigatse.

Konchoge, his nephew and deputy, is also a successful painter. He often sits for hours in front of a painter's easel to practice, and wants to become a highly acclaimed master.

"To paint a thangka, one needs to exert the power of the eyes, hands and heart with the utmost purity and show persistent attention to detail," Konchoge said.

Norbu Sidar and Konchoge are the fourth and fifth generations of thangka painters from the Thutop family. Thutop, who lived about 100 years ago in Tashigang village of Lhaze county in Shigatse, learned the basics of painting when he worked for a family in Lhasa.

After a few years, Thutop established his own style and began passing down the craft. His son, Dawa Dondrup, was a gifted painter and was invited to restore ancient paintings in the main hall of the Sagya Monastery in Tibet.

Dawa Dondrup, who was Norbu Sidar's grandfather, inspired and trained the boy.

"When I was young, my grandpa was painting most of the time," Norbu Sidar said.

At the age of 12, Norbu Sidar already knew the sutras by heart. "I thought it was very boring to recite the books, but the elders in my family kept checking my recitations. I would get scolded if I was slipshod," he said.

He used burnt willow branches to draw on a board of white pigment before going on to practice coloring and completing lines for the thangka. He studied under his grandfather for six years.

As thangka paintings are highly geometric and leave little room for creativity, Norbu Sidar said that practice is the only way to make them perfect. 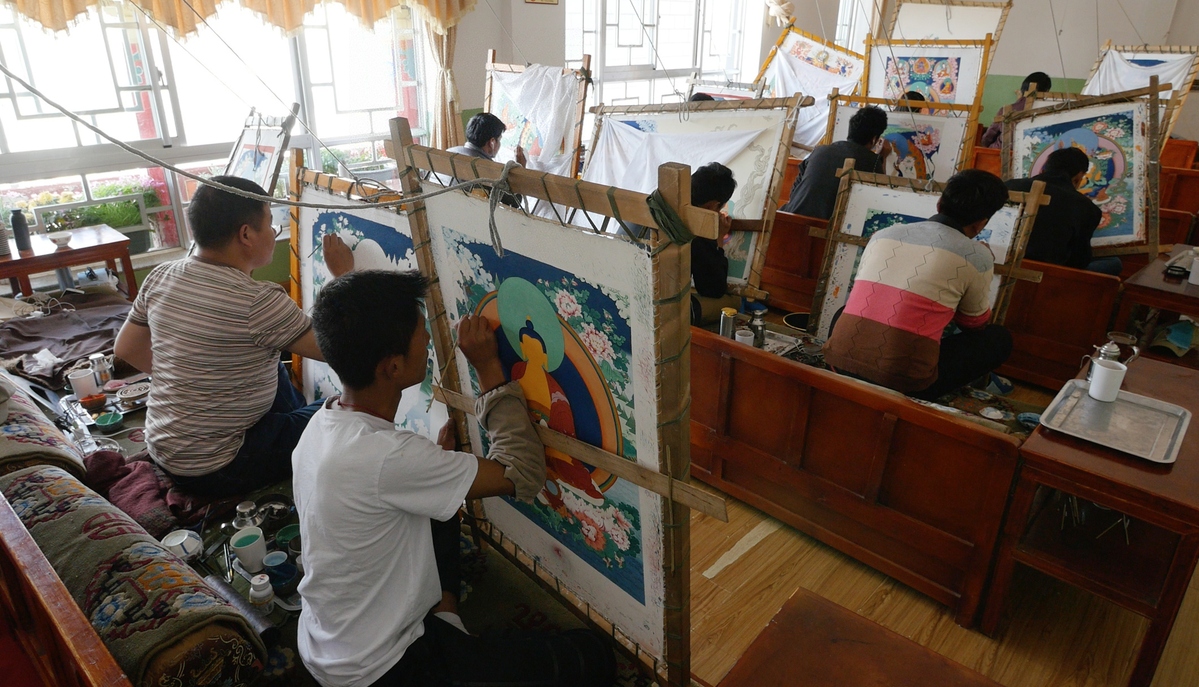 Students in the advanced level class practice painting thangka at the academy.

In the 1980s, Norbu Sidar participated in the repair and renovation project at the Tashilhunpo Monastery in Shigatse, where he honed his drawing techniques with seasoned painters.

Norbu Sidar said that the most difficult part was drawing the eyes. "Even the thinnest line matters. Each brush stroke tells the level of thangka mastery, which varies from one painter to another," he said.

Later, Norbu Sidar restored murals in the Sera and Drepung monasteries in Lhasa and became skilled at it.

From 2005 to 2015, he independently worked in the Potala Palace to restore 18th-century paintings - a job only the best conservators could handle.

"Some of the lines had disappeared, and the images were hardly decipherable. I had to read books to make out what was missing, and draw on my sketchbook before I laid my brush on the walls of paintings," he said.

A two-story building lies on Pargor street in downtown Lhasa, where Norbu Sidar, Konchoge, and their students retreat to sharpen their skills.

The group of around 40 students is divided into beginner, intermediate and advanced levels at the academy, and take the classes for free. Some leave to find jobs after they have learned the painting basics, but students like Tenzin have their minds set on becoming masters.

Tenzin, a 24-year-old student from an impoverished family in Lhasa, has spent seven years taking classes with Norbu Sidar. The academy, which is supported by government funds, gives him an allowance of 2,000 yuan ($298) every month. He keeps 400 yuan of the allowance and sends the rest to his parents.

"I want to use my brush to change my life and that of my family, but before I can do that, I need to have really good skills," he said.

Though soft-spoken, Norbu Sidar is uncompromising when it comes to training.

"A single thangka may have hundreds of images of deities, so the lines are crucial. The minimum practice each day is seven to eight hours for two years. It takes that much effort to be able to work the lines right," Norbu Sidar said.

Thangka was listed as a national cultural heritage in 2006, a status that has since given the art a strong boost. Over 10,000 people now work in the thangka industry in Tibet.

Government funds for heritage protection and sales revenue from the paintings help cover the operating costs of the academy. Every year, the academy hosts a seminar to carry out scholarly exchanges, research and training. Over the years, more than 300 craftsmen have graduated from the academy.

Though many shops in Lhasa sell inexpensive thangka paintings to undiscerning tourists and buyers for quick profits, Norbu Sidar and Konchoge insist on making their thangka the slow and traditional way, using expertly-made brushes from horse, goat and cat hairs.

"The value of a thangka lies in the history and art it contains. You can never be hasty about it," said Konchoge, who started learning the art at the age of 7.

He has traveled extensively across the country to give lectures on thangka. "I want to be a messenger for thangka. It is probably a good idea to have live broadcasts on how we approach the art to a wider audience online," he said.

Norbu Sidar said: "As one of the pearls of the Tibetan culture, thangka art must be passed on and revived in modern times. I hope my students will inherit the culture and pass on the persistent spirit that the art embodies."