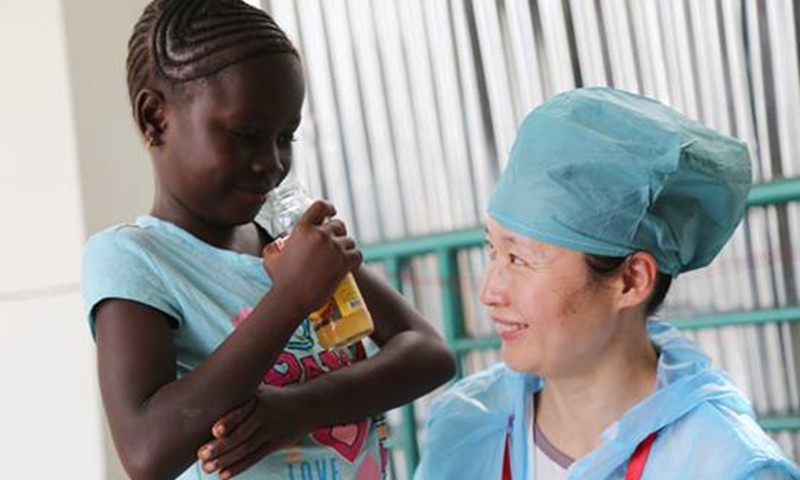 In March 2014, the Ebola epidemic broke out in West Africa and went on to become a global public health crisis. Responding promptly to the calls of the affected countries and the World Health Organization (WHO), the Chinese government lost no time in sending medical workers and supplies to the affected region, providing four rounds of emergency assistance totaling 750 million yuan ($115.38 million).

Huang Shun was the head of the nursing team on the second medical task force sent by the Chinese government to Sierra Leone. At the Ebola observation center of the China-Sierra Leone Friendship Hospital, Huang met Yayoma for the first time. This nine-year-old girl had just lost her mother and was left an orphan. An Ebola patient herself, Yayoma suffered high fever, vomit, diarrhea and incontinence, and had not been able to eat anything for three days. To save this dying girl, Huang and her team took turns to take her temperature and feed her medication and water. Each time before feeding water to Yayoma, Huang would check the water temperature with her wrist. Yayoma steadily got better. But bereavement was too much for the little girl. To help her get through this difficult time, Huang and 13 other female doctors on the task force decided to do something. They bought Yayoma cakes, chocolates and snacks, and gave her a toy panda they brought from China. The love and care from her "Chinese mothers" put the smile back on Yayoma's face. The toy panda became her close friend.

In addition to medical workers, the Chinese government also sent scientists to conduct vaccine research and development in the worst affected areas. Among them was Chen Wei, an academician of the Chinese Academy of Engineering and researcher of the Academy of Military Medical Sciences. She led her team to Ebola-stricken Sierra Leone multiple times before developing the world's first 2014 gene mutation Ebola vaccine. It is the world's most targeted Ebola vaccine and the first lyophilized powder vaccine dose that can be preserved for at least two weeks at 37 degree Celsius, which means it can be used widely in the tropical West Africa where cold-chain logistics is hardly possible. In her close-range encounters with Ebola, Chen Wei put herself at risk, demonstrating her commitment to her mission of providing medical aid to Africa and her sense of responsibility as a scientist and a member of the Communist Party of China (CPC).

In April 1963, the Chinese government sent a team of 24 medical workers to Algeria at the latter's request. It was the start of China's medical aid to Africa, which has kept growing in scale over the years. Under the leadership of the CPC, China has sent 21,000 medical personnel to more than 50 African countries and regions, provided 220 million treatments to Africans, trained tens of thousands of local medical personnel, built hospitals, and donated medicines. Some of the Chinese medical workers even gave their lives in the line of duty due to wars, accidents and diseases. Nearly 1,000 Chinese medical personnel have been given presidential medals and other prestigious awards by their host countries. The Chinese medical teams to Africa have been hailed as angels in white, a good example of South-South cooperation, and the most welcomed persons.

As President Xi Jinping put it at the opening of the 73rd World Health Assembly, "Mankind is a community with a shared future. Solidarity and cooperation is our most powerful weapon for defeating the virus. This is the key lesson the world has learned from fighting HIV/AIDS, Ebola, avian influenza, influenza A (H1N1) and other major epidemics. And solidarity and cooperation is a sure way through which we, the people of the world, can defeat this novel coronavirus." The CPC firmly holds that humanity shares the same future and that the Chinese government will not only take care of the lives and health of the Chinese people but also stay committed to promoting public health around the world.