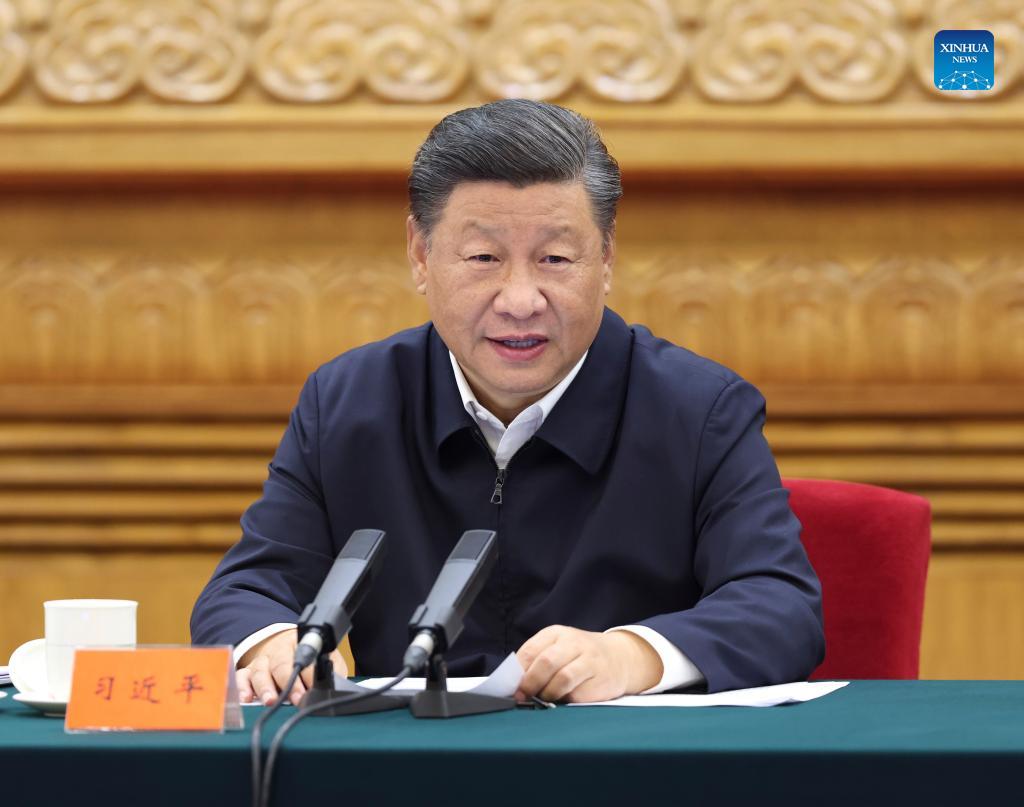 BEIJING, July 29 (Xinhua) -- The Communist Party of China (CPC) Central Committee on Monday held a symposium with non-CPC personages at Zhongnanhai to solicit opinions and suggestions on the current economic situation and economic work for the second half of the year. Leaders from the central committees of other political parties and the All-China Federation of Industry and Commerce, and personages without party affiliation attended the symposium.

Xi Jinping, general secretary of the CPC Central Committee, presided over the symposium and delivered a speech. He stressed that on the whole, there are favorable strategic conditions for our country's development. China's economy is endowed with great resilience, potential and vitality, and its fundamentals that will sustain long-term growth remain unchanged. As long as we fully and faithfully implement the decisions and plans of the CPC Central Committee and accurately identify changes, adeptly respond to them, and work to steer them in our favor, we will be able to seize the historic opportunity and get a head start in development. Non-CPC personages should align themselves in both thinking and action with the CPC Central Committee's analyses and judgments regarding the economic situation, and its decisions and arrangements for economic work, conduct in-depth fact-finding missions in light of new circumstances and problems, timely report on social conditions and public sentiment, and offer more practical and long-term solutions.

The symposium was attended by Li Keqiang, Wang Yang, Wang Huning, and Han Zheng, who are members of the Standing Committee of the Political Bureau of the CPC Central Committee. Entrusted by the CPC Central Committee, Li Keqiang reviewed China's economic work in the first half of the year and talked about the top leadership's considerations for economic work in the second half of the year.

They fully agreed with the CPC Central Committee's analyses of the current economic situation and considerations for economic work in the second half of the year. They put forward suggestions and opinions about how to unleash consumption potential and bolster the momentum of development, to improve supervision over and regulation of listed companies, to provide stronger financial support for key sectors, to expand employment for rural migrant workers and young people and to enhance fundamental work for epidemic prevention and control. Their suggestions and opinions are also related to issues such as how to develop a modern energy and electricity market, to perfect the taxation system for digital economy, to improve people's well-being and promote common prosperity through cultural programs, to better implement favorable policies for easing difficulties of enterprises, and to facilitate independent sci-tech breakthroughs in core and critical sectors.

After hearing their remarks, Xi delivered an important speech. He said that in the first half of this year, facing complex and grim situation abroad and confronted with formidable tasks of advancing reform, promoting development and maintaining stability at home, we effectively coordinated COVID-19 response with social and economic development and maintained stability in overall social and economic development by addressing all kinds of risks and challenges. Central committees of non-CPC political parties, the All-China Federation of Industry and Commerce and people without party affiliation voluntarily lent their support to COVID-19 response, and conducted fact-finding missions on important issues including how to push forward common prosperity and achieve peak carbon emissions and carbon neutrality. The opinions and suggestions they offered have helped the CPC Central Committee make sound decisions and effectively implement them. Central committees of the non-CPC political parties and people without party affiliation have actively engaged in democratic oversight for protecting the Yangtze River ecosystem. Leveraging their strengths in line with actual realities, they helped ensure faithful implementation of decisions and plans made by the CPC Central Committee.

Leveraging its advantages in functions, the All-China Federation of Industry and Commerce launched a joint campaign involving private enterprises and colleges in promoting employment. By effectively linking the campaign of "10,000 Enterprises Helping 10,000 Villages" with that of "10,000 Enterprises Vitalizing 10,000 Villages," it guided private enterprises in actively fulfilling their social responsibilities and pursuing high-quality development. On behalf of the CPC Central Committee, Xi Jinping expressed heartfelt appreciation for all their efforts.

In their remarks, all speakers fully appreciated the achievements we made in the first half of the year and put forward targeted and constructive opinions and suggestions for us to better understand the current economic situation and advance economic work in the second half of the year, said Xi, adding that all the opinions and suggestions will be carefully studied for adoption.

He noted that we have coordinated COVID-19 response with social and economic development since the start of the year and have secured a victory in the battle against the virus in Shanghai, withstanding the most severe test since the outbreak of the epidemic in Wuhan. Through arduous efforts by all throughout the country, we have made new achievements in social and economic development, which deserves full recognition.

In face of the difficulties, we should be aware that there are opportunities at the same time. As long as we maintain strategic resolve and stay committed to managing our own affairs well, we will definitely be able to turn risks into opportunities, said Xi.

Xi stressed that fully fulfilling the requirements of containing the epidemic, stabilizing the economy and keeping development secure is an integral whole, calling for coordinated efforts to understand, implement and evaluate them, so as to consolidate the recovering economy and strive for the best possible results. We should efficiently coordinate COVID-19 response with economic and social development, put the people and human life above all else, guard against inbound cases and any domestic resurgence and follow a dynamic zero-COVID policy. We should make proactive efforts to ensure that macro policies will help boost demand, and that fiscal and monetary policies will serve to effectively make up insufficient social demand and maintain a proper and adequate liquidity supply. We should also boost the stability and international competitiveness of our industrial and supply chains and optimize the layout of our domestic industrial chains, said Xi.

We should implement a holistic approach to national security, reinforce food security, improve our ability to guarantee energy and resource supply, and maintain overall stability in the financial market. We should still boost economic growth through reform and opening up. We should also do our part in securing people's well-being, ensuring basic living standards for people in difficulty, and increasing employment opportunities for college graduates.

Xi made three proposals. First, non-CPC personages should pursue unified thinking, have a correct understanding of the current economic situation, build political consensus featuring solidarity and positive attitude for development, and jointly overcome risks and challenges ahead. Second, they should leverage their strengths to boost sustained and sound social and economic development. Third, they should make concerted efforts to create a good environment for the convening of the 20th CPC National Congress. Other political parties should ensure stable and orderly changes of leadership, revolving around this main task while maintaining their political orientation, sound traditions and strengths. The All-China Federation of Industry and Commerce should improve theoretical and political guide for those in the private sector, enhance policy explanation, and reassure, inspire and unite them through practical measures.

Ding Xuexiang, Liu He, Sun Chunlan, Hu Chunhua, You Quan, Wang Yong, Xiao Jie, He Lifeng, and other leading officials of relevant departments of the CPC Central Committee and the State Council attended the symposium.