CHINA The end of May a vital point for pandemic development: Chinese top respiratory expert

The end of May a vital point for pandemic development: Chinese top respiratory expert 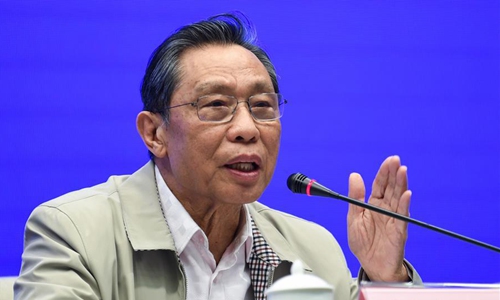 When will the deadly COVID-19 pandemic reach an inflection point? Chinese top respiratory specialist Zhong Nanshan said that it depends on the pandemic situation outside China, especially in the US.

Zhong made the remarks at a forum in Guangzhou, South China's Guangdong Province on Tuesday.

He noted that the end of May would probably be a vital point for the pandemic's development. Higher temperatures will help to curb the virus, according to Zhong.

According to media reports, temperatures in many parts of China are expected to exceed 30C during the upcoming Labor Day holiday including Beijing, Tianjin in northern China and Wuhan, which was previously China's pandemic epicenter in central China.

China has performed well in the first stage of the battle against the COVID-19 pandemic. However, as global infections have exceeded 3 million and many European and American countries are still at high risk, the country is still at a tough stage in the battle, Zhong noted.

Zhong said that preventing imported cases is key for China at the current stage, which to some extent, is even tougher than the first.