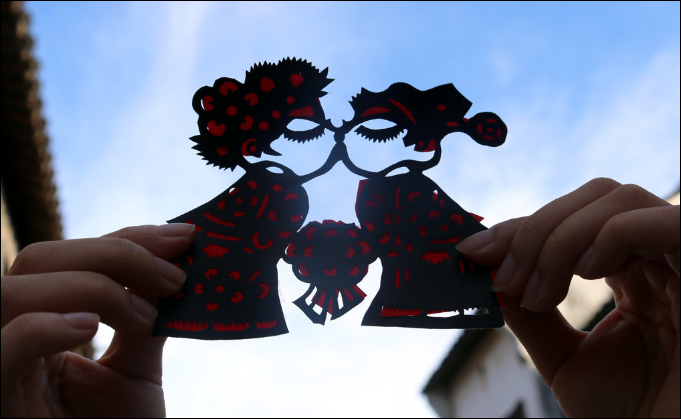 A tourist displays a paper-cut made by a Chinese folk artist for the upcoming Qixi Festival, or the Chinese Valentine's Day, in Suzhou city, East China's Jiangsu province, on Aug 14, 2018. (Photo: IC)

Although Qixi has flown by, the yearning for an ideal love will never fully stop for China's young generation.

Generation Z, today's youngest group, are those born in and after 1995. They have grown up with the internet and are said to be tech-savvy and obsessed with social media.

And now, as they enter adulthood and will soon join the workforce, many wonder about their love philosophies.

Taobao Software and Tantan, the Chinese version of Tinder, issued reports a few days ago that may shed light on the habits, desires and outlook of the generation.

According to Taopiaopiao and Dengta professional, two applications developed by Taobao, 29 percent of users born after 1995 buy only one ticket when seeing a movie, implying most of them are what is known as "single dogs".

Although the majority of viewers are not alone at movie theaters, those who cannot find company won't miss the opportunity for a few hours of entertainment and relaxation.

The report says most "single" viewers choose to watch a movie during the day instead of the night - more often the dating hours for young lovers.

It also shows first-tier cities like Beijing and Shanghai have more viewers who don't mind watching movies by themselves.

It seems these "single dogs" quite have an enjoyable experience at movie theaters in spite of being alone.

Money matters for a lasting relationship

According to the report by Tantan, girls born after 1995 have higher expectations regarding income than boys for their "future someone".

Nearly 40 percent of girls wish their future boyfriend could earn over 10,000 yuan ($1,418.5) each month, while boys usually don't have any such requirements for girls.

Educational background will also influence income expectancy. Nearly 70 percent of those with a master's degree expect their future someone could earn over 10,000 yuan a month, while those graduating from associate colleges have lower requirements.

Despite higher income-related factors, girls are also reportedly more financially independent. Most young females said they prefer taking turns to pay, although it is a Chinese tradition for boys to pay the bill instead.

The report shows 62.8 percent of Chinese respondents born after 1995 can accept a love relationship even if the girl is older than the boy.

When gender is taken into consideration, a surprising 90.7 percent of male respondents think it acceptable, higher than the proportion among girls.

However, educational and income level still affect the acceptability of age gaps for those born after 1995. 75.8 percent respondents with a monthly income of above 20,000 yuan are open to girls older than boys in a relationship, while 21.5 percent with a master's degree can accept an age gap of over ten years.

Youngsters from Shanghai, Beijing and Tianjin have been reported to have the highest acceptability of over-ten-year age gaps.

Although boys who are obsessed with playing games once left a bad impression on girls, things are quite different now.

The report shows today's young girls not only care less about whether boys play computer games or not, but are also more easy to fall for those who can carry the whole team and lead them to victory.

Most young women born after 1995 had strong concerns about young men’s Western zodiac signs, while 82.5 percent of the men said they didn't care about these signs at all.

According to the report, among young women, Libra, Cancer and Aries men were the most popular while those with Virgo, Scorpio, and Sagittarius signs were the least favored.

Chinese girls born after 1995 appear more "realistic" than those of the 1970s or 80s when asked whether they can accept getting married without a house. 74.6 percent think boys must purchase a house ahead of marriage.

However, this lucky generation again seem quite "idealistic" when asked about the ideal marriage age: most hope they can get married before 26.5 years old, meaning they should get married three to four years after graduation. This is more than five years earlier than the 70s and 80s generation, who don't want to get married until after 30.