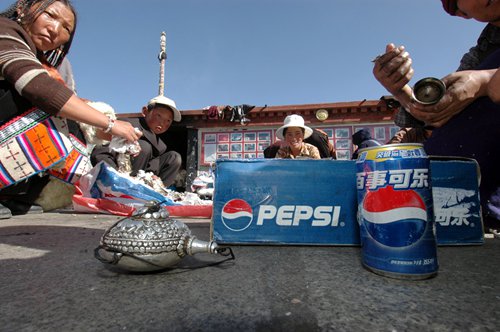 Imaging playing basketball with your buddies under the hot sun. You run, you play, you have fun and work up a sweat, then that special someone comes over and offers you a nice ice-cold bottle of cola. You eagerly open it and gulp down the bubbling beverage, and are soon swept away by sweet bliss.It is easy to imagine a cool moment like this. What most people may have a hard time imagining is something like this happening in Southwest China's far-off Tibet Autonomous Region. While most people may not associate the region with cold bottles of cola, actually this type of soda is not just a leisure drink there, it is an important beverage in most people's daily lives.Cultural adaptationIf you have been to Tibet, you were probably deeply impressed by this sacred place. Sitting at an average altitude of more than 4,000 meters above sea level, Tibet is nicknamed "the closest place to heaven." Adapting to life there, one of the first things you have to get used to is the thin air and low temperatures that the high altitude brings. Among the locals, they have developed a unique lifestyle that helps them find the energy to tackle the day in this unusual environment. To help wake themselves up quickly in this high-altitude area, nothing is more refreshing than enjoying a can of cola in the morning. Compared to other ways to get sugar into one's diet, cola is the easiest and cheapest way in Tibet, since candy is not as prevalent as it is in the rest of China. "I think cola is probably the most popular beverage among Tibetans," Tenpa from Lhasa, the capital of Tibet, told the Global Times. "After the 1980s, cola became very prevalent in the region. And besides that, it is really tasty."In this mountainous area, especially the northern plateaus of Tibet, where the temperature stays under 10 C even in summer, keeping warm is of the utmost importance. To keep warm, high-calorie food and drinks are a necessity. Typically, highland barley wine and butter tea are essential parts of every meal, along with some yak meat and highland barley cake. While these may be high in calories, they can be tough to digest. Full of carbonic acid and soothing bubbles, cola is seen as the perfect drink to help settle one's stomach after a meal. Over in the southern region of the Tibetan Plateau, cola also appeals to a large majority of locals."I always have a can of cola after dinner," Nyang, who lives in a Tibetan autonomous prefecture in the south of Gansu Province, told the Global Times, "I live in the very south of the Tibetan area, where the altitude is not too high, but I still like cola." Risky habitWhen it comes to what we eat, too much of a good thing can be detrimental to one's health; cola is no exception. "It is not healthy. I don't think it should be encouraged," Phurbu, a Tibetan woman from Lhasa, told the Global Times. According to medical research, drinking too much cola - around two to 10 liters per day - may lower your potassium levels, which can make you feel weak and cause constipation or even paralysis. "I'm also concerned that cola contains many chemical components that can influence our hormones, which is sure to have some negative impact on our health. That is why I think we should not encourage drinking cola too much," Tenpa said.In addition, since cola has caffeine in it, this black liquid may also be very addicting. "My uncle uses cola as a replacement for drugs," one local Tibetan confided. In Tibet, parents are constantly reminding their kids about the dangers of drinking too much cola, but  many children still cannot help but have just one more can of cola when their parents are not around. "We are not allowed to have as much cola as we want at home," said Lahm from Dege county, a Tibetan area in Southwest China's Sichuan Province. "My mom listens to a Tibetan medical program on the radio every night, during which a local doctor is always talking about the dangers of having too much cola. Every time, she ends up staring at me and warning me to not drink anymore cola.""But I still like to have a cola in secret, which is even more exciting for me," said Lahm.Despite the risks, cola is still a best-seller in Tibetan areas. Almost all schools and even the most remote monasteries buy cola, even if it's just to stock the shelves of their shops. Whenever someone heads to the store and asks if they need to buy something, the usual answer among Tibetans is "cola."Even those Tibetans who leave their hometowns to travel, study or work still end up drinking cola, as it has become something of a habit in Tibet. "My desire to drink cola has become stronger than when I was in Tibet," said Tenpa. "This is in part because of the change in weather, but mostly it's because cola has become a comfort food that reminds me of home. So I end up not trying anything else."