CHINA The old and new of Chinese Spring Festival

The old and new of Chinese Spring Festival

Despite the unwillingness of many to return to work, on Wednesday the curtain finally dropped on the week-long holiday in celebration of the Chinese Lunar New Year.

The Spring Festival holiday not only has become a time for family gatherings and cultural activities, but also a boom time for businesses across the globe. 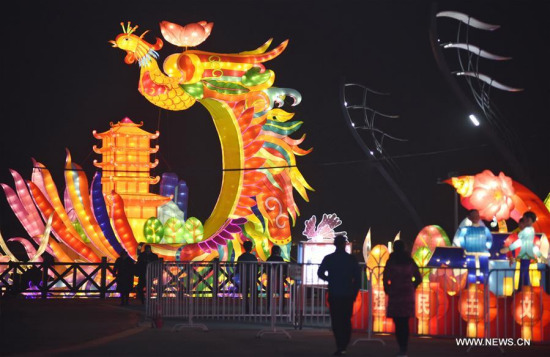 A TIME FOR CONSUMPTION

Less than two decades ago, most shops and restaurants closed their doors during the Spring Festival holiday. Now, it is deemed a golden chance to drive up revenue.

Over the past week, Chinese spent 926 billion yuan (about 146 billion U.S. dollars) on shopping and eating domestically, up 10.2 percent from last year's holiday, data from the Ministry of Commerce showed Wednesday.

Consumption in culture and entertainment was also strong, with China's box office raking in a new record of 4.6 billion yuan from Feb. 16 to 20, up nearly 60 percent from a year earlier. On the first day of the Spring Festival the box office was 1.3 billion yuan, breaking the global single-day record in a single market.

Instead of traditional festival-related goods such as meat, nuts, and dried fruit, health-conscious Chinese consumers are looking for greener food for a less greasy holiday.

"Previously, I often bought bacon, sausages and seasoned ducks for the New Year, but these food contain too many additives. So this year, I mainly purchased seafood and fruit," said a woman surnames Zhang from Shanghai.

Technology also reshaped the consumption mode during the festival. Data from online retailers JD.com and Suning.com showed laptops, AR/VR equipment as well as drones have become new favorite gifts, with their sales doubling or even tripling during the holiday. Previously, food and new clothes were the must-haves to welcome the Chinese New Year.

The round-the-clock preparations for family feasts are also diminishing as more people are taking the holiday to relax or embark on family trips, which again boosted the holiday consumption.

The number of tourists during the holiday topped 386 million across the country, up 12.1 percent, according to the National Tourism Administration.

While the digital economy and high-speed trains are transforming the way people celebrate the festival, some cultural traditions and customs are well preserved.

Returning to hometowns remains the most important part of the Spring Festival. Whether self-driving, or taking the trains or flights, homecomings and family gatherings are a priority for many Chinese. The National Development and Reform Commission estimated that about 2.98 billion trips would be made during this year's Spring Festival travel rush between Feb. 1 and March 12.

Temple fairs have been a popular choice for experiencing traditional customs during the Spring Festival. In Beijing, the Ditan and Longtan temple fairs attracted more than 1.7 million tourists in five days.

For the past decade, 76-year old Niu Dewang has visited a temple fair in Beijing every year.

"Going to the temple fair is like going out for a stroll every day. The flour tea, sugar-coated hawthorns, shadow puppetry, and sugar figurines make everyone in the family cheerful," he said.

Lion and dragon dances, as well as ceremonies welcoming the God of Wealth were also held in most parts of China during the festival. For the Chinese families, hanging new red couplets and the Chinese character of "fu" on their gates is an important way to usher in a prosperous and happy new year.

Galas and celebrations are not only held in China, but are widely embraced globally.

Yu Yan and his wife flew to New York City during the holiday, and they were more than surprised to see a fireworks display on the bank of the Hudson River.

The ten-minute show incorporated traditional elements of the festival such as Chinese knots and the animals of zodiac. "Not only Chinese, but also many locals took part in the celebration," Yu said.

Yan Yan took a photo with her family in front of a giant dog-shaped lantern in Australia. This year is the Year of the Dog, which holds the 11th position of the 12 animals on the Chinese zodiac.

What astonished Yan even more was the popularity of the Chinese "fu"-scanning game. The game, launched by Alipay, allows users grabbing a digital red packet after collecting five "fu" characters.

More than 400 cities in over 130 countries and regions have joined the celebration of the Chinese Lunar New Year in 2018, the State Council Information Office said.

"The Chinese New Year is like a global cultural symbol, rather than a festival just for Chinese," said Yu.

"The festival carries rich connotations of Chinese culture such as family values, harmonious society and amicability. These are shared by people across the globe and have therefore made the Spring Festival more accepted by other cultures," said Zhang Quanlin, a sociologist.