CHINA The population of elk in China has exceeded 8,000

The population of elk in China has exceeded 8,000

China basically achieve the goal to restore elk population as the number of the animal exceeded 8,000 after 25 adult elk recently were released into the wild. 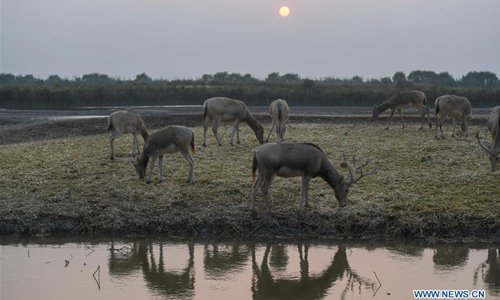 These elk were released on November 6 in the Dafeng Elk National Nature Reserve in East China’s Jiangsu province. They have been give GPS necklace to real-time monitor the movement track of them in the wild, so as to realize the conservation grid management, China News Service reported Sunday.

The latest release takes the total number of elk in China to more than 8,000 among whom 5,681 are in Dafeng, accounting for more than 60 percent of the world, which indicated that China has basically achieved the goal to restore elk population.

Elk is native to the middle and lower reaches of the Yellow River and the Yangtze River in China. It is a first class national protected animal. It is also called “Sibuxiang” in Chinese because its horns resemble deer, its head looks like a horse, its hooves like an ox and its tail like a donkey.

The Dafeng reserve is one of the three elk protective areas in China with the other two separately in Beijing and Shishou, Central China’s Hubei Province. It is also the world’s largest elk protection area and the most complete elk gene bank, media reported.

In recent years, China's wildlife protection laws and regulations system has been gradually improved, habitat conditions have been significantly improved, and remarkable achievements have been made in the rescue and protection of endangered species. The population of China's unique species represented by elk shows a good trend of expansion.

The number of birds in Longbao National Nature Reserve in Qinghai reached 121, up from seven new species this year, according to the latest bird survey results Wednesday.