CHINA The sands of time blow toward a greener world

The sands of time blow toward a greener world

Adhering to the belief that "only by containing the sand, our children and grandchildren will survive and thrive", Wang and his family have been stationed in the #TenggerDesert for over 20 years, voluntarily tackling sand encroachment and planting more than 8,000 mu (533 hectares) of tress. They have helped turn the once endless desert into an oasis. 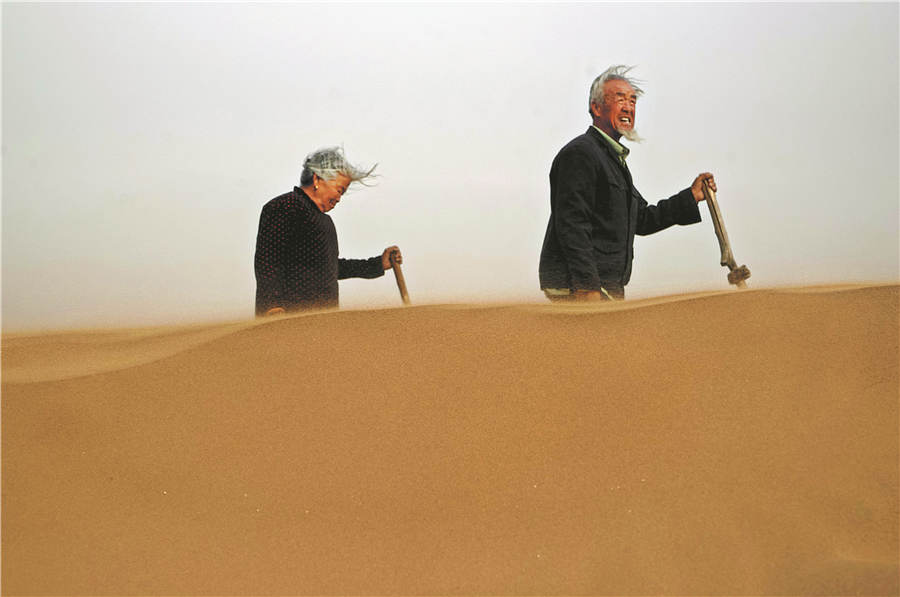 The couple walk into the desert for their daily sand control. (Photo: China Daily)

In the spring of 1999, the then 56-year-old Wang put forward the idea of afforestation in the Tengger Desert. Strongly opposed by his family and ridiculed by the villagers, Wang secretly sold the family's cattle, sheep and camels. With the collected money, the couple brought their tents and sand control tools to the desert.

"It's not easy to plant trees, especially in the desert. I just dug a tree hole the first day, and I filled it up overnight. The seedlings were dead and I had to replant them. If the specially designed grass blocks were broken, they would be repaired, in order to find out the flow of sand," he says. To improve the survival rate of sand-grown seedlings in the desert, Wang observed the flow of sand dunes in areas where it was most severe in the 12th lunar month in winter. He also explored the best spots for planting grass and trees, and gradually found effective methods for planting saplings in the desert. In order to tackle the problem of water scarcity, Wang bought two-humped camels. His wife led the camels to transport water on a route of more than 3 kilometers between their home and the desert back and forth every four and five hours.

In order to save water, Wang used a spoon to water the young saplings planted in the desert－one spoon at a time, without daring to waste it at all. They cherished the water so much that they didn't even wash pots, bowls, and chopsticks after meals. Instead, they used clean sand to wash their tableware. After washing their face in the morning, the water was kept for reuse at noon. When washing their feet, they just rubbed them with sand.

Wang's spirit of living in the desert for decades has moved many people. Every year, volunteers from all over the country and tens of thousands of local people come here to fight the sands with the couple and protect their home.

Over the past 22 years, Wang and his family have invested more than 1.2 million yuan ($187,770) to the unremitting task of containing the sand and planting trees in the Tengger Desert. During this period, in order to improve the progress of sand suppression, the couple spent more than 6,000 days in achieving more than 8,000 acres of sand afforestation, and used camels to transport 5,000 tons of water on the sand line. The round-trip journey was more than 12,000 kilometers.

In November 2019, 76-year-old Wang had his entire stomach removed due to a malignant tumor. Wang's weight dropped from 160 kilograms to just several dozen kilograms, but he was stubborn and still did not give up his lifelong dedication to desert control and forest protection. He says he will continue to fight for a few more years.

Today, the couple live in a bungalow built in the desert, surrounded by green trees. The desert, which used to be barren and ravaged by constant sand and wind, is full of plants. A green "dragon" stretches on the desert and builds an ecologically safe green barrier.