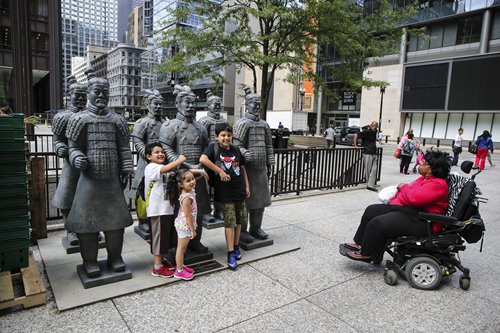 Children pose with Terracotta Warrior replicas on the street in Chicago. (Photo: VCG)

During the ongoing Two Sessions in China, Wang Chunfa, the director of the National Museum of China, emphasized the importance of implementing safeguard measures when exhibiting Chinese historical treasures overseas.This may have been in response to an incident that occurred at the Franklin Institute in the US in December 2017, involving a Terracotta Warrior statue, one of China's most valuable archeological finds. According to US media reports, a young man broke off and stole a thumb from one of the statues, valued at $4.5 million, after he snuck into the exhibition area at the institute during an after-hours museum party. More surprising, the damage done to this valuable artifact went unnoticed by museum staff for two weeks.Though the FBI caught the alleged thief and reclaimed the stolen thumb, the incident has sparked heated discussion in China about whether the country's national treasures are receiving adequate protection when being lent abroad. Too close for comfortOne of the main points of criticism revolves around the way items are displayed overseas versus in China. "In foreign countries, exhibitions are quite different from our own," Tracy Zheng, a curator in Beijing, shared her opinion about the incident with the Global Times. "Most of them are open exhibitions without display cases, which is supposed to give visitors an opportunity to get a clear view of an artifact." However, these types of open exhibitions can be a double-edged sword, as the lack of protection can invite trouble. In 2006 in Britain, three ceramic vases on display at the Fitzwilliam Museum in Cambridge were broken by a visitor named Nick Flynn, who accidently crashed into them. Dating back to the Qing Dynasty (1644-1911), the three were part of a set of five vases valued between 200,000 and 300,000 pounds. The vases were later restored and returned to the exhibition, this time in a display case."It should be noted that open exhibitions are usually only used for some collections. For example, if an item is too large to move, then it is usually displayed openly," Zheng explained.In China, however, most exhibitions are displayed behind protective barriers. "The safety of collections is quite important in China," Zheng said. "This means that most items are placed inside display cases. And if open displays are used, the curators for the exhibition always make sure to leave a safe distance between visitors and the items on display."Room for improvementWang Rui'en, a netizen on popular Chinese question-and-answer website Zhihu, has a similar outlook as Zheng. Wang pointed out that US museum has a responsibility to ensure the safety of exhibitions. "Museums in the US emphasize visitor interaction with collections, which I think is reasonable, but that does not mean the US museum is not at fault for what happened in this incident," Wang posted on the site. "I read the news from USA Today, and the fact that the thief was able to sneak into the closed exhibition area is definitely due to the negligence of the museum's administration." According to Zheng, this event should also sound the alarm for museums in China. "Security personnel should be assigned to oversee valuable collections to ensure no one can damage these treasures," Zheng emphasized. "This is especially important for open exhibitions, as this is the best way to protect fragile relics." The importance of security personnel cannot be underestimated. For instance, in 2006, one of the Terracotta Warriors on display at the Museum of Qin Terracotta Warriors and Horses in Northwest China's Shaanxi Province came "alive" after German art student Pablo Wendel, who was dressed like one of the warriors, jumped into the display pit and hid among the statues. Though security personnel found him after a brief search, his "performance art" demonstrated a need for increased security.After the accident, the museum made some improvements on its security. According to an official at the museum, more security guards were put on duty at the site, but he emphasized that the best way to protect these treasures is to educate the public about proper museum etiquette. Having visited successful exhibitions in big museums such as the Metropolitan Museum and the Museum of Modern Art in the US, Wang was inspired by the way collections were displayed. "While none of the items were behind glass, all of the precious paintings are roped off and there are signs warning visitors to not touch the art," Wang said. An Laishun, a vice president with the International Council of Museums, expressed his concern about the balance between the safety of collections and visitor experience. "Museums should draw a line to limit risk to items on display, especially during open exhibitions. Proper protection is an absolute necessity."