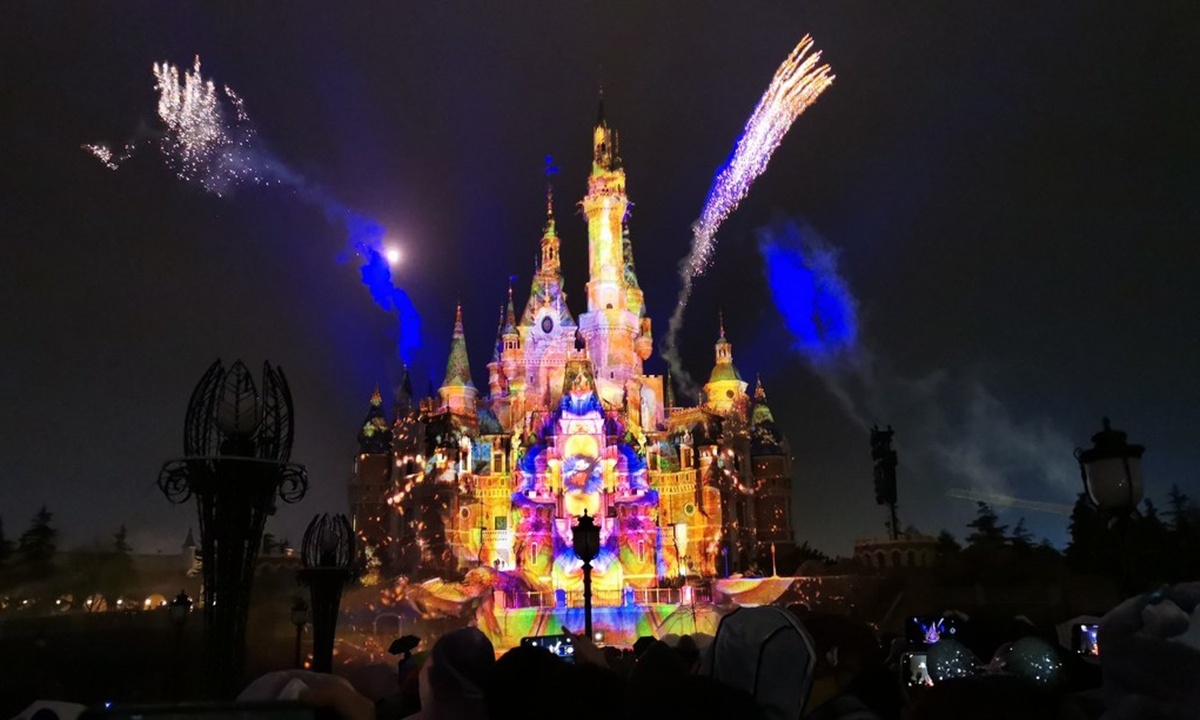 Shanghai Disneyland puts on a spectacular fireworks and light show above the Enchanted Storybook Castle to celebrate the approaching of spring. (Photo: IC)

With the COVID-19 pandemic battering the tourism industry throughout the globe, theme parks in particular, those located in the Chinese mainland have, however, witnessed the fastest recovery in the world.

For instance, Disneyland has paid great tribute to the thriving Chinese market, saying that the performance of Shanghai Disney resort has "exceeded expectations" and "expanded faster than any Disney park" in the company's history as the US theme park and entertainment conglomerate celebrated the fifth anniversary of the Shanghai Disneyland resort.

Though not entirely cleared of challenges such as lingering impact from the coronavirus pandemic and the upcoming launch of a Universal Studios theme park, viewed as one of Disneyland's biggest competitors in Beijing, Shanghai Disney has continued to set new records, to the great satisfaction of its parent company, which has induced the US multinational corporation to ramp up its investment in China.

"Shanghai Disney resort has exceeded our expectations since Day 1 and it has become one of the world's most popular vacation destinations... I'm incredibly optimistic about the future of Shanghai Disney resort," said Josh D'Amaro, Chairman of Disney Parks, Experiences and Products via a video speech at a media conference on Tuesday.

Although the senior executives didn't disclose specific financial revenue figures for the Shanghai theme park, they provided some general statistics of the park's performance that point to a healthy business operation.

For instance, the Shanghai resort was the first destination to reopen after the pandemic was largely controlled in the country, and it has contributed to over 4 percent of Shanghai tourism in terms of consumption within three years of its opening, and one of the park's attractions has been flying guests around the world for more than 21,000 hours, the equivalent of 1,500 flights from Shanghai to California, over the past years, said Joe Schott, president and general manager of Shanghai Disney Resort on Tuesday.

"According to the data released by Shanghai Disneyland, the development was ideal in the context of the epidemic at home and abroad, since some listed cultural tourism companies are losing money. Shanghai Disney Resort still witnessed the best recovery," Huang Tao, a public relations analyst, told the Global Times on Tuesday.

At present, the virus has not been completely eliminated, which affects the inter-provincial tourism and the flow of people. It also increases the cost of prevention and control for many enterprises, while the number of tourists has dropped, to which enterprises should pay attention, said Huang.

The Global Times saw on Tuesday that the Shanghai resort has been decorated with many road signs and plants with patterns that celebrate its five-year birthday. Guest flow was significant but was orderly.

Senior executives also disclosed that the park is now actively pursuing further expansion. For instance, the resort is "making incredible progress" on Zootopia expansion after the topping of the attraction was completed last December. The company will also partner with China Eastern Airlines to launch another Disney theme plane soon.

Joe Schott said at the conference that the Shanghai resort represents a growth potential that is "enormous".

"The land is large enough to continue to enable us to expand the theme park...we hope to bring even more new, rich experiences to Chinese people as Shanghai Disneyland gets bigger and better," he said.

Shanghai Disney's biggest foreign rival in the Chinese mainland is likely to be Universal Beijing Resort, which occupies about 400 hectares, and was approved by China's top economic planner, in September 2014.

"The opening of Universal will diversify Chinese theme park market aid fiercer competition. It will draw from nearby tourism markets in North China, with Disneyland located in East China and Chimelong Safari Park locates in South China's Guangdong Province," a tourism analyst told the Global Times.

It is expected to officially open in the first half of 2021, with test operations now ongoing.

A Beijing resident surnamed Xu, a fan of Universal, told the Global Times on Tuesday that he has been waiting for the opening of the theme park for a long time.

"I want to buy some souvenirs! And I am so disappointed that they are not on sale yet," said Xu.

"Research shows that theme parks will cause a large spillover effect, and the fanning-out effect of the projects like Universal's Beijing resort can be 10-15 times of the income of the attraction itself, which will play a very significant role in stimulating economic development of the whole region," said Tom Mehrmann, President and General Manager of Universal Beijing Resort, in December 2020 during a theme park summit.

According to company's marketing material, the resort will be equipped with 7 theme scenic areas, 37 riding entertainment facilities and landmark attractions, 24 kinds of performances, 80 restaurants and 30 retail outlets.

"Projects of this size and supporting facilities will further drive consumption in the surrounding area, continue to enable economic and social development in the area, while creating a good number of jobs," said Mehrmann.

A challenge for theme parks is the hard-to-predict trajectory of the pandemic, which has seriously shortcut tourism and retail consumption. At the same time, theme parks are facing growing competition. And, industry observers have underscored the importance of theme parks embracing online revenue channels, such as live-streaming and e-commerce, to guard against the coronavirus, said Huang.