BEIJING, June 22 (Xinhua) -- Ahead of the 100th anniversary of the Communist Party of China (CPC), the Museum of the CPC has opened in Beijing, capturing the attention of the country.

The museum, a site devoted to permanent and comprehensive exhibitions of the Party's history, was inaugurated on Friday with its first visitors, including Xi Jinping, general secretary of the CPC Central Committee. 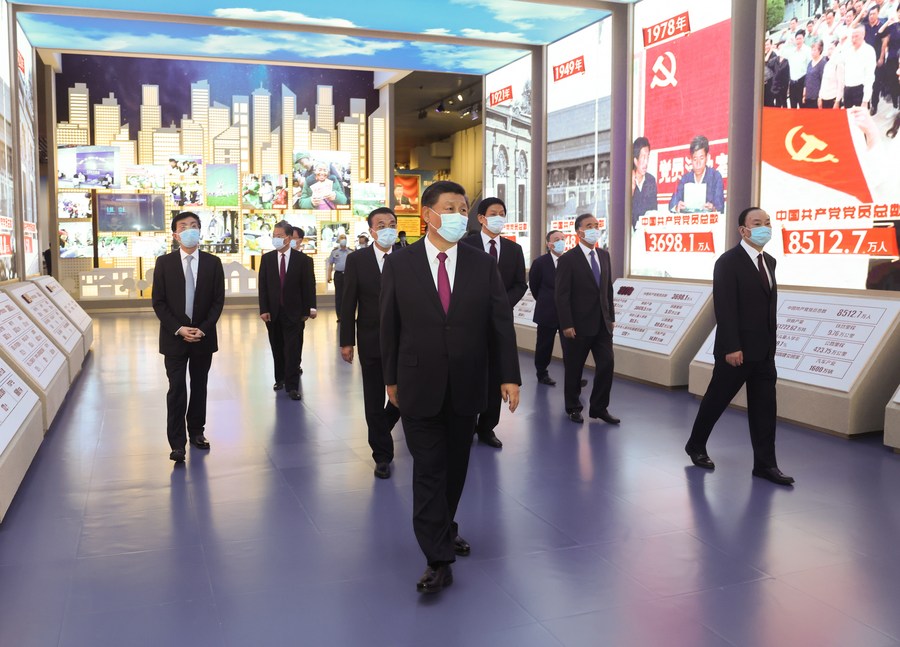 Why is the new landmark museum described as the Party's "spiritual home"? Why is it so important to the centennial CPC?

Scattered throughout China, revolutionary sites such as the memorial of the first National Congress of the CPC in Shanghai, the memorial hall marking the start of the Long March by the Central Red Army in Jiangxi Province, the venue of the 1935 Zunyi Meeting in Guizhou Province, and the Beijing's suburban Fragrant Hills memorial site, map out the contours of the CPC's 100-year history.

Since the 18th National Congress of the CPC, Xi, also Chinese president and chairman of the Central Military Commission, has been reflecting on the Party's founding mission during his inspections of revolutionary memorials across China in a bid to lead the Party and the country to create the future.

Believing that the Party's history is the most vivid and convincing textbook, the CPC Central Committee, with Xi Jinping at its core, decided to build a museum of the CPC's history in late 2017.

The first issue is to select a site.

A piece of land reserved for cultural sites near Beijing Olympic Park was chosen, taking into consideration its location, the height of the building and the surrounding environment.

Shao Weiping, chief architect of the Beijing Institute of Architectural Design (Group) Co., Ltd., was informed about the museum project at the beginning of 2018.

"As an architect as well as a Party member, I was very excited to have the chance to participate in such an important project," said Shao.

A design team was soon established by the company to draft the proposal.

Shao's company, renowned for designing the Great Hall of the People more than 60 years ago, emerged victorious and became the museum's leading design institute.

The museum's groundbreaking ceremony was held on Aug. 26, 2018, and construction began on Sept. 10 of the same year.

"We turned our love of the Party into motivation for the construction work, regardless of the heat of summer and the cold of winter," said Wang Heng, project manager of the Beijing Urban Construction Group Co., Ltd.

Xi himself has been following the construction process.

On the afternoon of Sept. 29, 2020, Xi listened to a work report on engineering construction and museum exhibitions, and outlined clear requirements for the next step.

Xi stressed the importance of demonstrating the theme of "staying true to the founding mission" to show that the CPC strives for the well-being of the people and national rejuvenation.

The museum should be a sacred hall, a spiritual home for Party members, an educational center to guide the public to follow the Party's instructions, and an authoritative institute for Party history research and publicity, Xi said.

On Feb. 8, 2021, Xi also presided over a meeting to review the Party history exhibition plan.

The meeting stressed that representative and convincing elements should be used to clearly explain the historical background of the founding of the CPC, the historical inevitability of the Chinese people choosing the leadership of the CPC, and the Party's adherence to integrity, innovation and progressing with the times.

On May 5, 2021, after nearly 1,000 days of construction, the Museum of the CPC was officially completed.

Details of the museum are full of historic connotations.

The museum is in the shape of the Chinese character "gong," which looks like a horizontal H. "Gong" means workers or labor in Chinese. The design implies that the CPC is the vanguard of the Chinese working class, the Chinese people, and the Chinese nation.

The museum adopts a traditional colonnade structure, fully representing the essence of Chinese architecture: upright and foursquare, simple but grand.

There are 28 colonnades on the eastern and western sides of the exhibition hall, symbolizing that after 28 years of struggle, the CPC established New China.

Five magnificent sculptures stand in the museum's square, with the huge CPC flag sculpture aptly named "Flag" denoting that the CPC flag offers direction and is a source of strength. In the four other sculptures, a total of 276 figures tell the story of the CPC's 100-year struggle for the well-being of the Chinese people and national rejuvenation.

Nearly two-thirds of the main building area, or about 150,000 square meters, has been designed as exhibition space.

In the exhibition hall, a special post office is set up to serve visitors and tell CPC history through its services, using a special postcode "100100" that not only symbolizes that the museum was completed upon the 100th anniversary of the founding of the Party, but also that the CPC is marching forward toward its two centenary goals.