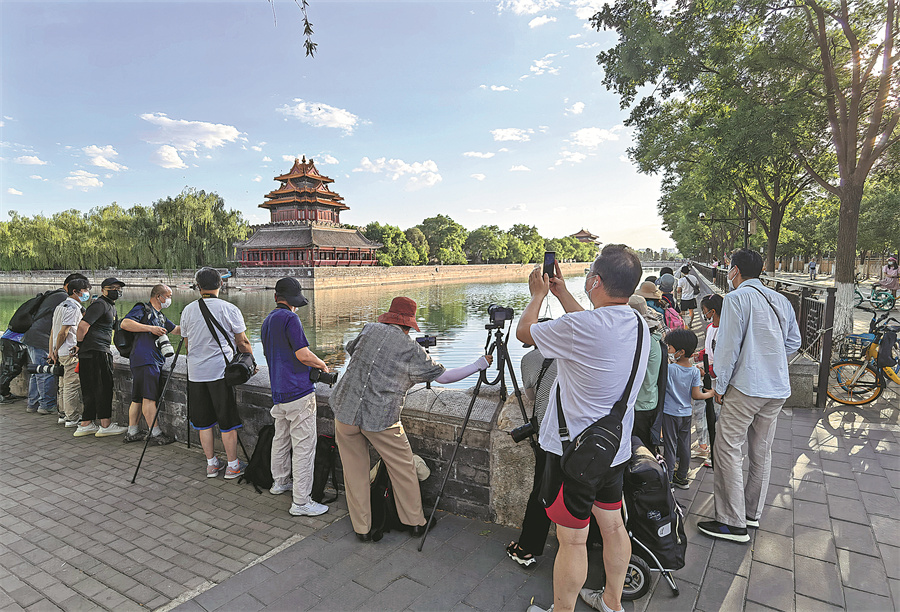 People take photos of a corner of the Forbidden City in Beijing on a sunny day last month. (Photo: China Daily)

The China Council for International Cooperation on Environment and Develop-ment is marking its 30th year of providing policy advice. Hou Liqiang reports.

Horses on the streets to provide transportation downtown and cabbages piled high on street corners.

These are some of the things Martin Lees and his wife Christina remember from the time they spent in Beijing in the 1980s.

Now, shrouded by high-rise buildings and bustling with an endless stream of cars, the capital has said farewell to those scenes, which locals are keenly aware were features of the past, of an underdeveloped city and country.

Cabbages were a dominant winter vegetable for many families in northern China. They showed up at the dinner table day after day, with the only change being how they had been cooked.

Recalling his time in China, Lees, former secretary-general of the Club of Rome－an informal gathering of influential intellectuals who discuss pressing global issues－was filled with emotion.

He has many reasons to be proud of the changes as he was part of an international team that still injects momentum into China's environmental progress by contributing suggestions about developments to the government, often directly to the central leadership.

The 80-year-old was one of the initiators of the China Council for International Cooperation on Environment and Development, aka the CCICED, in 1992. He served three five-year terms as a member of the high-level think tank that reports to the government. The council is now chaired by Vice-Premier Han Zheng.

Three decades have passed since then, and the country has not only seen its economy boom, but also made significant environmental progress.

From 2013 to last year, national GDP rose by 94 percent, while the number of cars on the nation's roads soared by 150 percent, according to the Chinese Academy of Environmental Planning.

Despite those developments, energy consumption and carbon dioxide emissions per unit of GDP fell by 16 percent and 22 percent, respectively.

Though launched to learn from the experiences of other countries, the council has also developed into a platform that exports ideas about China's environmental policies.