Thousands of medics rush to Sanya to aid anti-epidemic fight 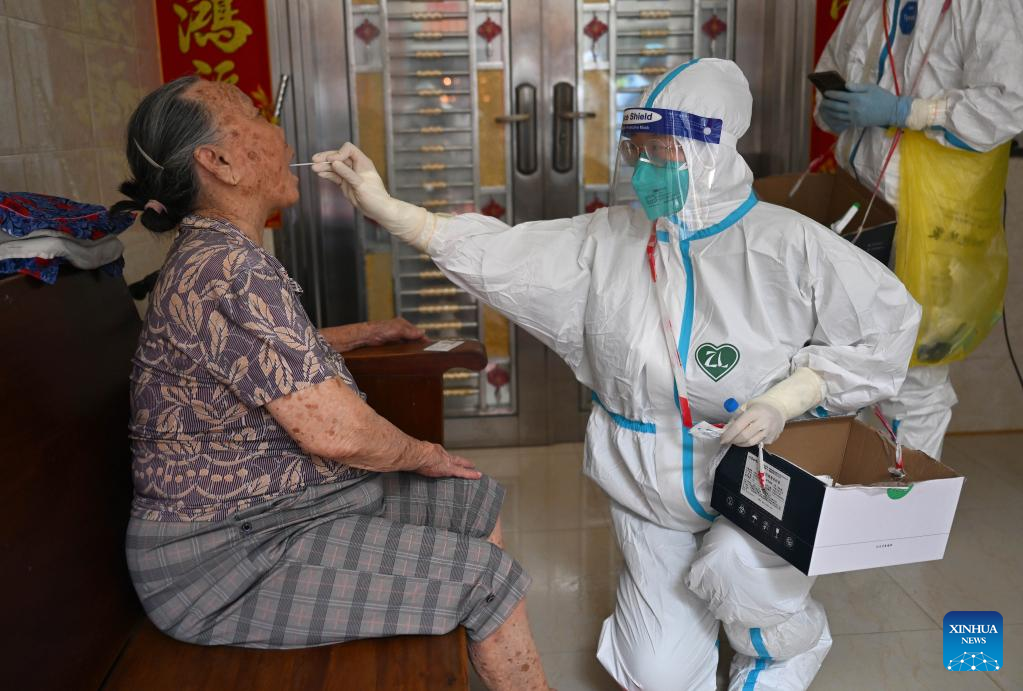 She did not come on holiday. Instead, her daily routine is collecting nucleic acid samples, clad in a heavy hazmat suit, in a neighborhood in Tianya district.

Between Aug 1 and 11, over 4,000 COVID-19 infections were reported in Sanya, southern Hainan province, and the situation is still severe as the new infections exceeded 1,000 on Thursday.

This is the first time for Li to aid an anti-epidemic fight outside Henan.

"I was the first to sign up when our head nurse posted a message asking if anyone is willing to go to Sanya," Li said.

She gets up before 5 am every day and then takes a bus to Nanbianhai, a fishing village, to conduct nucleic acid testing. She also needs to visit the homes of those that are under quarantine or have difficulty moving.

"We should be there wherever and whenever needed," said Li.

Li was among 100 medics from the First Affiliated Hospital of Zhengzhou University that arrived in Sanya to join the anti-epidemic fight over the weekend.

"Our hospital is the largest one in Henan, and our medical staff has always been on the frontlines of fighting the epidemic, from Wuhan to Shanghai to Henan's Anyang," said Zhang Guangchao, a head nurse from the same hospital.

Over 10,000 medics from 19 provincial-level regions have been drafted to help Hainan in fighting the latest COVID-19 resurgence, with the majority in the worst-hit city of Sanya.

A team comprised of 201 medics from Hubei province is in charge of the nucleic acid testing at 41 venues across six communities. They collect about 50,000 samples every day.

"It's a huge workload and the well-armed medical staff are soaked in sweat in half an hour under the scorching sun in Sanya. So we change shifts every two hours," said Jiang Botao, the team leader.

In a gymnasium at the Sanya Technician College of Hainan, a gas membrane nucleic acid testing lab set up by a team from South China's Guangdong province was put into use on Aug 7.

"We hope to screen out the positive cases and let everyone's life return to normal as soon as possible," said Zhang Ning, who heads the team from Guangdong.