Thousands of Song artifacts excavated from salvaged ship found in the S.China Sea 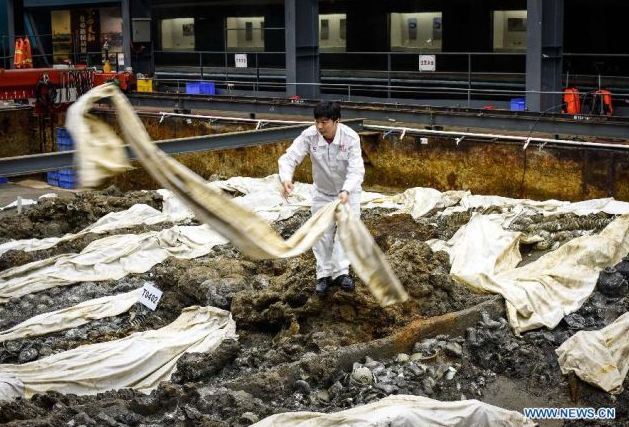 Some 21,000 artifacts and 2,600 animal and botanical specimens were discovered on  Chinese ancient ship Nanhai No.1 in the past decade, experts said during an international conference convened to celebrate the 10th anniversary of the ship's salvage.The two-day international academic conference opened on Saturday in Yangjiang, South China's Guangdong Province, where it was revealed that most of the relics discovered on Nanhai No.1 were porcelain artifacts, amounting to more than 19,000. There are also 180 gold items and 183 pieces of silverware, as well as 274 others made of unidentified materials, the Guangzhou Daily reported. About 17,000 copper coins were also found.Sun Jian, deputy director of the National Center of Underwater Cultural Heritage (NCUCH), said that it will still take at least a year to finish excavating the merchant vessel.  It is expected there will be between 60,000 and 80,000 relics salvaged in total, according to the website of the Maritime Silk Road Museum of Guangdong (MSRMG), where the ship is being excavated in a special pool.The conference, with more than 80 experts from eight countries and regions, was jointly held by institutes including the NCUCH and the MSRMG, the Guangzhou Daily reported.Nanhai No.1 is the first ancient ship discovered on the Maritime Silk Road of the South China Sea, and its current name means "South China Sea No.1." The ship is 30.4 meters long and 9.8 meters wide. It is the oldest and largest ancient shipwreck found in China, the MSRMG website said.Dating back to the early Southern Song Dynasty (1127-1279), the vessel was discovered in 1987 when the Maritime Exploitation and Recovery Company and the Guangdong Salvage Bureau were searching for another shipwreck of the Dutch East India Company. It was salvaged in one piece  in 2007 from its resting place over 20 meters underwater. Excavation on the ship started in November 2013. The project has helped develop marine archaeology in China, and it is still the most important underwater archeological achievement in the nation.