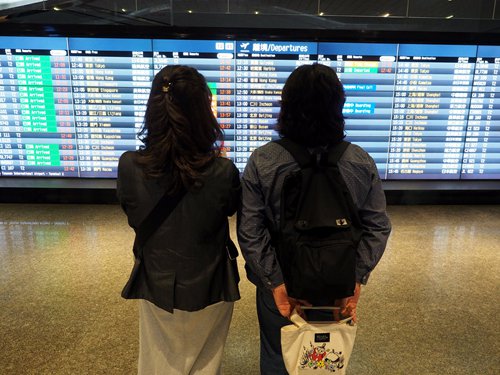 Two women look at a flight information board at the Taoyuan International Airport in Taoyuan county, in Taiwan, on January 29. Photo: IC

Instead of preparing gifts for their relatives, many Taiwan residents working on the Chinese mainland are rushing to find a way back home after their flights were cancelled just days ahead of Spring Festival. Less than a month before the most important family gathering in China, the island's aviation authority has decided not to approve 176 additional cross-Straits flights operated by China Eastern Airlines and Xiamen Airlines, citing security concerns regarding the M503 route.All the 106 additional flights, mainly covering routs in Shanghai and cities in East China's Jiangsu and Anhui provinces, were cancelled, China Eastern Airlines confirmed with the Global Times on Thursday. For Xiamen Airlines, the affected route mainly covers Central China's Hunan Province and East China's Fujian and Zhejiang provinces.The two airlines announced that they will fully refund or help with ticket changes for passengers affected by the cancellations. Though the cancellation does not affect routine flights between mainland cities and the island, it is expected to make things very difficult for around 50,000 people looking to return home during the holiday, the Xinhua News Agency reported. Xue Qingde, a Taiwan businessman who has been investing in Fujian's Pingtan county for over a decade, told the Global Times that his social media pages have been bombarded with messages complaining about the inconvenience caused by the cancellation. The separating of family members in peacetime should not happen at all, and many feel they have been used by Taiwan authorities as human shields for leverage over the M503 route, said Xue, who is also the president of a department store in Pingtan and leader of a local association of Taiwan businessmen.The cancellation has forced those affected to turn to other alternatives, such as taking last minute flights from other airlines or transferring through Hong Kong, Macao or Fujian's Kinmen county, making their week-long vacation shorter and more costly. Placing additional cross-Straits flights for the festival have been a regular practice since 2008 when direct flights between the two sides began after Taiwan authorities lifted a partial ban on Chinese mainland tourists visiting Taiwan. Unite together What Xue did not expect was the support from mainland authorities, companies and people for those looking to go home for the reunion. In a poll of more than 2,500 users by tianya.cn, one of the most popular social networking sites in China, 83 percent said they were willing to postpone travel plans to Taiwan so that Taiwan residents could make the trip back home on time. "Coming back home to celebrate Spring Festival is of utmost importance for Chinese. Taiwan compatriots have been busy working the whole year and their time for family reunion should not be affected by the Taiwan move," wrote "yangyiws".Flights and ships between Taiwan and Fujian, which faces the island across the strait, were also added to meet the demand during chunyun, or the Spring Festival travel rush that lasts from Thursday to March 12. Flights from Fujian cities to Taiwan carry as many as 590,000 passengers and ships sailing from the province's Pingtan and Xiamen to the island could carry over 60,000 passengers during the period, Xinhua reported. State-level and local Taiwan affairs offices are also asking affected Taiwan compatriots about their trips and offering support to those who have not yet found a way home, said Xue.In a separate poll on Taiwan-based news website udn.com,  nearly 75 percent of the more than 8,000 surveyed said Tsai Ing-wen's government should not make a fuss about the M503 and hurt the interests of Taiwan compatriots. Taiwan authorities are looking to use the refusal as leverage to negotiate with the mainland, but have ignored the fact that those most affected by the decision are Taiwan residents, Yang Lixian, deputy secretary-general of the National Society of Taiwan Studies, told the Global Times. Dead endThe current Taiwan authorities are coming to a dead end but they still lack a clear understanding of their influence on cross-Straits relations, including what they are capable of doing and what they should not do, Yang noted.The cancellation of flights has brought huge complaints from the media and public in the island, with many writing on social networks that it is the most "unbelievable" and "worst ever" decision from a Taiwan leader. It's only a matter of time before the Taiwan people teach the Democratic Progressive Party a lesson with their votes, said Yang. In 2017, Taiwan residents made a record-breaking 5.87 million visits to the mainland, and  from January to November last year, more than 3.6 million Taiwan residents chose the mainland for their first overseas trip, Xinhua reported.