Xi spoke to them via satellite from the Beijing Aerospace Control Center.

He attaches great importance to the development of the aerospace industry and always asks about the work and life of astronauts in space. He also had two calls with astronauts before.

On November 9, 2016, Xi talked with astronauts Jing Haipeng and Chen Dong in the Tiangong-2 space lab.

Like a family and friend, Xi asked about the health, living conditions and work progress of the two astronauts.

The president said he hoped the two astronauts would “keep up the good work through close cooperation and careful operation,” to complete their mission. 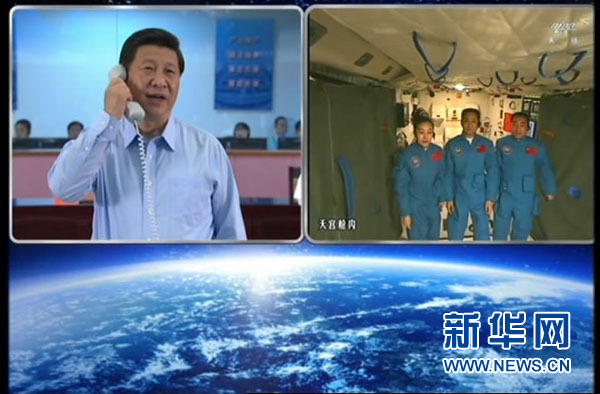 On June 24, 2013, Xi has a call with the three astronauts - Nie Haisheng, Zhang Xiaoguang and Wang Yaping - aboard the orbiting space module Tiangong-1. (Photo: Xinhua)

On June 11, 2013, the Shenzhou-10 spacecraft was successfully launched.

Xi specifically instructed relevant teams to make sure the astronauts could have Zongzi, a traditional triangular snack made of glutinous rice stuffed with different fillings and wrapped in bamboo leaves for the occasion, so that the crew would celebrate a special Dragon Boat Festival.

On the day of the launch, Xi visited the Jiuquan Satellite Launch Center for the astronauts’ send-off.

Almost a fortnight later, Xi, who had been thinking about the three astronauts, came to the Beijing Aerospace Control Center and talked to them.

From their physical condition to the progress of their work, from the individual to our motherland and then to the dream of spaceflight, Xi was thorough. His cordial and sincere words sent the most heartwarming care to the three astronauts.

When Nie Haisheng said that all three of them were in very good physical health, Xi said "very well" with satisfaction.

Being attentive, Xi also specifically asked Zhang Xiaoguang and Wang Yaping, who had worked in space for the first time, whether they had adapted to the weightless environment of space.

Xi Jinping affirmed the astronaut's "willingness to explore without fear."

"This precious quality of will is enlightenment and inspiration to the people of the whole country," he noted.

All these three calls took place at a different time and space. What has not changed is Xi's attention to the aerospace industry, and the same is his deep care for astronauts.