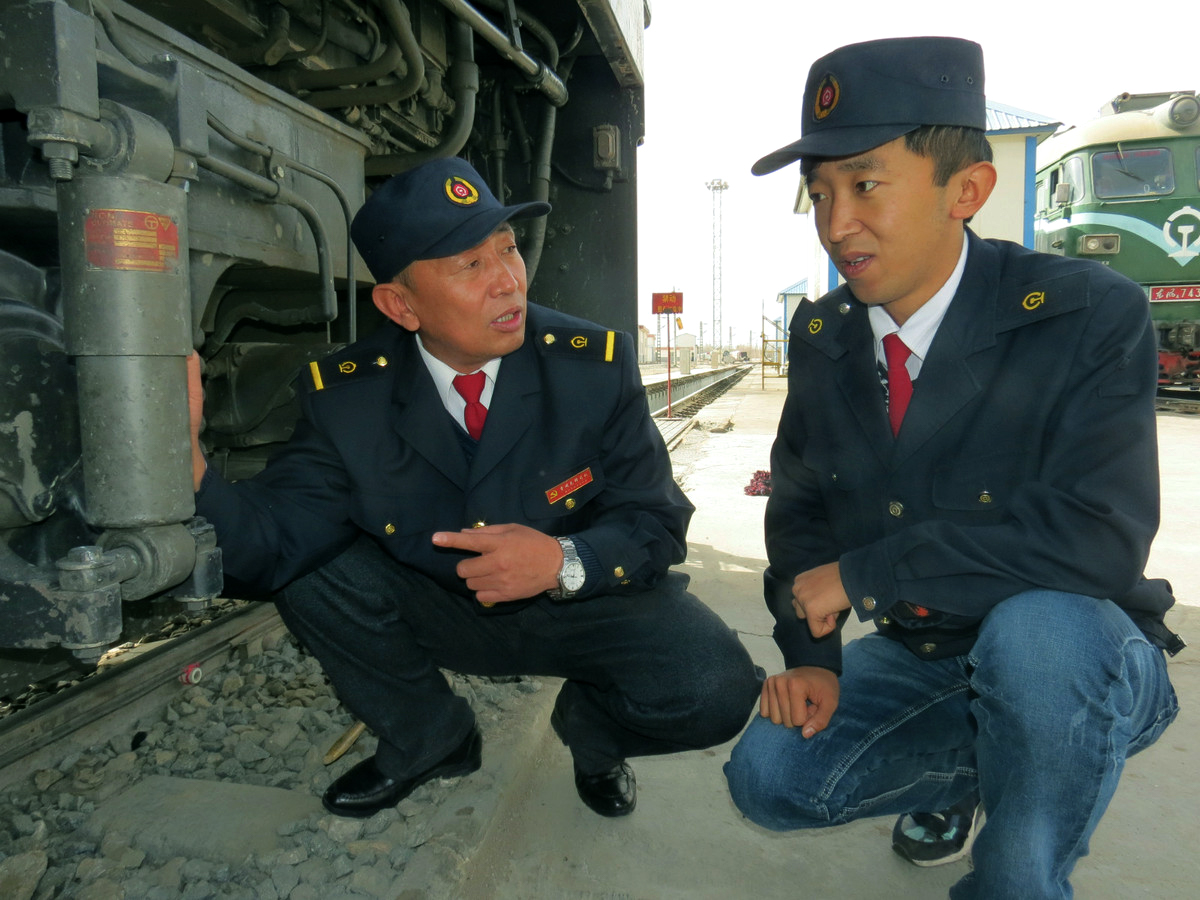 Li Wen(left) and his son Li Yongwei discuss possible causes of a train malfunction in a depot of the Qinghai-Tibet Railway. (Photo provided to CHINADAILY)

When Li Renchao became a train engineer in 1959, he did not think it would become a family affair. Both his son and grandson have worked for China's railways, reflecting the country's development from steam power to internal combustion and finally electric engines.

Li, now 81, started work with the Lanzhou-Xinjiang Railway in 1959 as a 21-year-old trainee. He then became an engineer operating steam engines, which were notorious back then for their slow pace, shabby interiors and lack of air conditioning and sleeper beds. All this was accompanied by plumes of black smoke.

"The conditions were not what people would accept for a normal job these days," he said. "The steam locomotive needed people to add coal without a break. A 200-kilometer journey needed 10 tons of coal, so stokers were adding coal all the time."

In winter, with temperatures at-20 C, icicles could be seen hanging from the roof of the engineer's cabin. Even the proximity of the coal furnace did not help. But in summer, hot days were insufferable.

His son, Li Wen, has an enduring memory of his father's face covered in soot after work. Despite hearing countless stories from his father about how to handle hunger, cold and heat - and even sometimes having to repair the train - he followed in his footsteps without a second thought.

"Forty years ago, a train with a speed of more than 40 kilometers per hour was the most efficient transportation on the Qinghai-Tibet plateau. So being a train engineer was an extremely honorable thing for a family," he said.

Li Wen became a diesel engineer in 1984, as China was saying goodbye to most of its old steam trains. He was in the first batch of engineers on the Qinghai-Tibet Railway when it opened in 2006.

The family tradition of working on the railways kindled the passion of Li Yongwei, the third generation of the family to become an engineer.

"Besides my father and grandfather, my uncle and aunt also work in the railway system. It's like it's in our veins, and that's why I have a special feeling for the railway. It's because of my family," he said.

After leaving the Army in 2009, Li Yongwei became an apprentice engineer for the Qinghai-Tibet Railway Co and obtained his license to drive an electric locomotive in 2015.

"Compared with earlier generations, trains are now equipped with microwave ovens, refrigerators and restrooms, which provide a more comfortable and convenient working environment for the staff," he said.

The three generations of the family have operated train engines for a combined 54 years. They have seen great strides in China's railway industry.

"The dream of a clean and fast train finally came true in the younger generation," Li Wen of the middle generation said.

Li Yongwei, the youngest, is now preparing to qualify as a high-speed train engineer and hopes his father and grandfather can ride with him on one in the next three years.