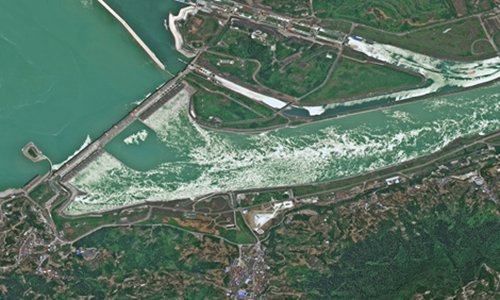 One image captured by Chinese Earth observation satellite Gaofen-6 shows that the dam is well operated without any signs of deformation. (Photo: China Center for Resource Satellite Data and Applications)

Monitoring data gathered since it began operations shows that all buildings are in normal working condition and the project is safe and reliable, the China Three Gorges Corp (CTG) said in a statement released on its official WeChat account on Saturday.

All the indexes of the dam were within the allowable range of the design, the statement read.

Affected by water levels and temperatures, the horizontal displacement in the upstream and downstream direction of the dam crest was between -1.82 and 28.70 millimeters.

The statement came as speculations arose in connection with Google Maps that appeared to show the dam as deformed.

The dam's defenders argued that high temperatures or water vapor might have altered the online image.

Launched in 2018 and operated by China Center for Resource Satellite Data and Applications, Gaofen-6 can provide high-resolution images.

To monitor the dam in real time, builders installed 12,987 pieces of equipment of which 2,681 detect deformations, CTG said in the statement.

Among the monitors, 5,330 operate automatically and detect internal deformation of buildings, such as the dock and underground power plant, the statement read.

"The Three Gorges Dam is an absolute safe project, which could survive up to 1,000 years. Apart from Earth gravity, no other external power, either flood or earthquake, could cause the deformation of the dam," Guo Xun, a research fellow at the Institute of Engineering Mechanics at the China Earthquake Administration in Beijing, told the Global Times on Sunday.

Guo noted that it is a fact that all dams undergo certain deformations daily due to the Earth's gravity. But as long as they fall within an elastic range, everything is safe.

If one day the Three Gorges Dam deformed beyond its elastic range, Guo said, the reinforcing bar within the dam is of an extremely high compressive capacity that would prevent the dam from collapsing.

Rumors abound over the Three Gorges Dam, manipulated by domestic and overseas forces, who intentionally tarnish the project and the Chinese government for their own purposes, Chinese experts noted.

The Three Gorges Dam in Yichang, Central China's Hubei Province, is a multi-functional water control system, consisting of a 2,309 meter-long and 185 meter-high dam, a five-tier ship lock and 26 hydropower turbo-generators.