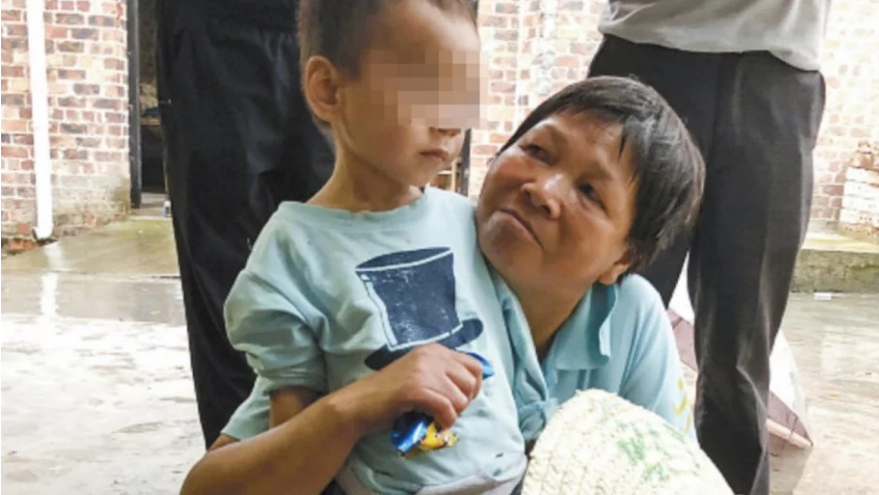 The toddler was found by a relative who stopped by the boy’s home to borrow farming tools. After calling at the door and receiving no response, the 72-year-old relative noticed water running downstairs from the second floor of the house.

After going upstairs, she found the unconscious boy lying with his grandfather on the ground near the bed – the grandfather’s body had begun to rot, and the boy was breathing hard near him. She carried the boy out and called for help from neighbors.

Fortunately, after being given milk and saline water, the boy regained consciousness after more than four hours.

“He was so lucky,” one of the villagers said, “Actually, we had heard the boy crying for many days, but we were all busy with the farm work, so we didn’t pay attention to what happened.”

The villagers believe that the boy’s grandfather had been dead for five days when they discovered the child, and that the toddler survived by drinking tap water.

The boy had been taken care of by his grandfather, whose wife had died before. The boy’s mother left the family a year ago and the boy's 25-year-old father had left for Guangdong Province to find work, leaving his 66-year-old father and three-year-old son alone at home.

Although the boy was eligible for kindergarten, his application for enrollment had been turned down, citing health reasons. He has a history of fainting and sudden convulsions – something the kindergarten said could shock other kids.

As the family is not qualified for for government aid, some villagers are now raising money on Wechat, a ubiquitous messaging app, to help the boy to access to medical treatment.

This three-year-old boy is just one of the 61 million “left-behind children” from poor families in China whose parents leave at home to find jobs in other regions, provinces, and even countries. These children, unfortunately, have become a massive social problem that has produced many tragedies.

In June 2015, four left-behind children from the same family in Bijie, an impoverished city in southwest China’s Guizhou Province, committed suicide together by swallowing pesticides. The oldest brother was 13 years old, while the youngest sister was only five. Their mother had left the family, while their father was working in another city – they had dropped out of school because they could not afford it.

In a separate case in November 2012, five boys were found dead from carbon monoxide poisoning after starting fire inside a dumpster to stay warm.

According to the research, these children are at a high risk of committing suicide, being abused, and suffering from other behavioral problems.

The government admits that this is a problem that needs to be resolved. In 2016, China released guidelines for setting up a system to provide care for left-behind children from families, government and social groups, requiring rural officials to keep track of them, and parents to keep in touch with their children by phone and video chat.