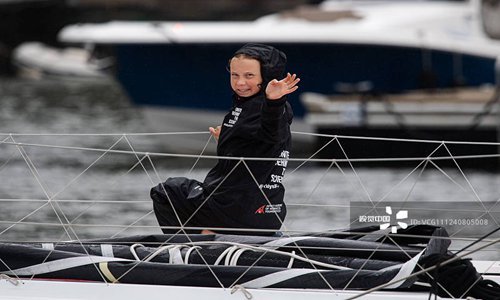 Swedish climate activist Greta Thunberg, 16, waves upon arrival at harbor in New York, the US on Wednesday after sailing across the Atlantic Ocean in a zero-carbon yacht to attend the UN Climate Action Summit in September. Photo: VCG

Swedish teenage climate activist Greta Thunberg has been criticized by Chinese netizens for being ignorant and "falling for Hong Kong secessionist Joshua Wong's PR stunt" after she blindly joined Wong in requesting the release of 12 Hong Kong anti-govt rioters detained for illegally crossing the border.

The teenage activist again grabbed attention on Chinese social media after she retweeted Joshua Wong's tweet on October 12 urging the release of the 12 Hong Kong rioters. Thunberg said on Saturday she had been "nominated by Joshua Wong to join the campaign," and asked netizens to "spread the word" by tagging three Twitter friends.

Along with her tweet, she also posted a picture of herself holding a card that said, "#SAVE12 HKYOUTHS."

Their collusion was soon met with a backlash on the Chinese internet, with the majority of netizens calling it "despicable." "She is calling white black by asking to save the Hong Kong rioters, which also shows that she is nothing but a clown eager to play to the gallery," commented one Sina Weibo netizen.

Chinese mainland maritime police in August arrested 12 people suspected of illegally crossing the border in waters under mainland jurisdiction in South China's Guangdong Province. Hong Kong media reported that one of them was an anti-government rioter who allegedly violated the national security law for Hong Kong.

"When Thunberg began to gain fame, I found her very juvenile… and much more of a celebrity who serves the needs of politicians and capital. Now she seems to be lost in all sorts of populist movements, which proves that she is backed by certain political groups," said another net user.

Some netizens also criticized her for meddling in Hong Kong's affairs while keeping silent on the Japanese government's plan to release contaminated water from the Fukushima Daiichi nuclear power plant into the sea, with some asking, "Isn't she a "environmental activist?"

This is not the first time Thunberg was found to have fallen for Joshua Wong's PR stunts. In December last year, Wong posted a long Twitter thread connecting the topic of climate change with the Hong Kong issue, claiming that both share some similarities and that the world cheered and applauded for youth who stand up and fight. The Swedish girl responded in a tweet that it was very "important" and "inspirational."