By PALDEN NYIMA and DAQIONG in Lhasa | China Daily 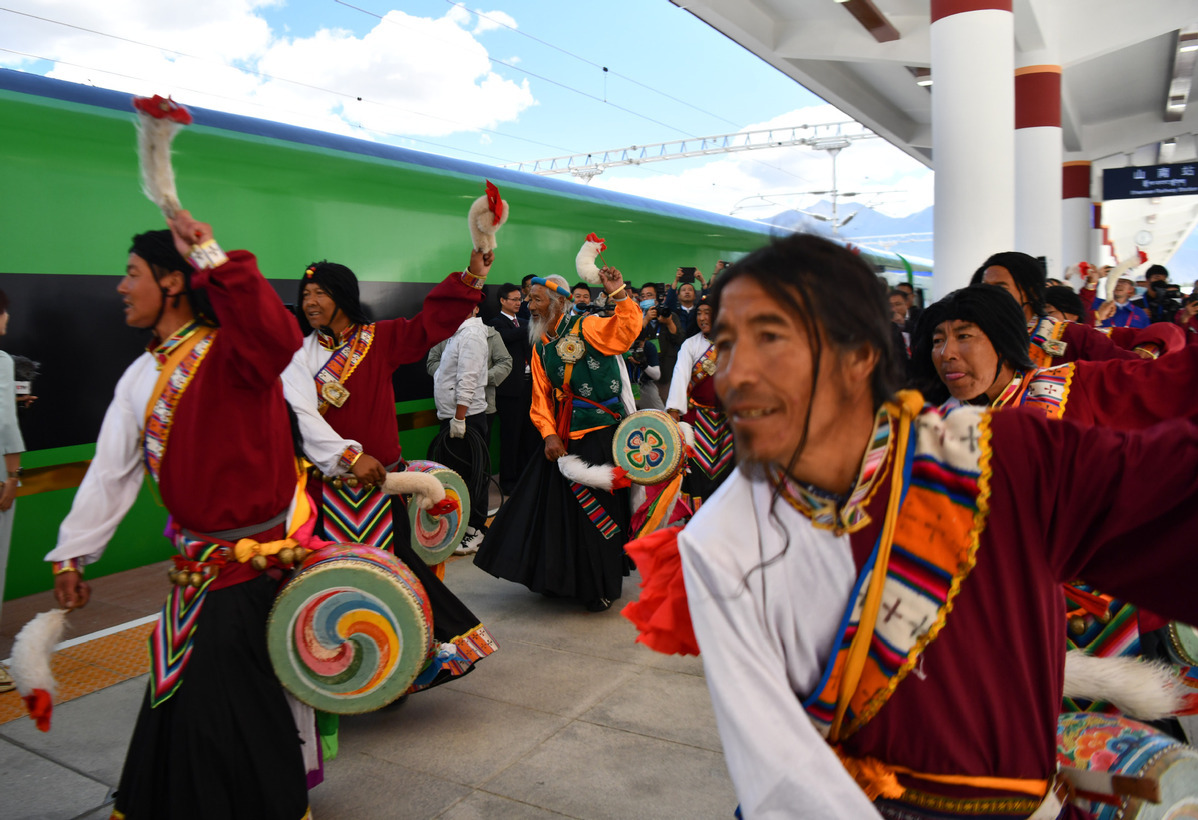 Residents dance to celebrate the opening of the Lhasa-Nyingchi Railway, at a station in Lhokha, Tibet autonomous region, on June 25. The railway is the first electric line in the region. (Photo: Xinhua)

The Tibet autonomous region has made historic achievements in urbanization over the past seven decades, and the people of all ethnic groups in the region have enjoyed upgraded infrastructure, the region's department of housing and urban-rural development said on Thursday.

Before the region's peaceful liberation in 1951, Lhasa was the region's only urban town, with a total urban area of less than 10 square kilometers and a population of more than 10,000, Jiang Yuexia, deputy head of the department, told a news conference on Thursday.

"In the 1950s, the region only had an urban population of less than 70,000, and its urban function and infrastructure level were very backward," she said.

Urban construction of Tibet started in the 1950s, and a series of urban infrastructure projects were undertaken in the region, and a few urban towns have emerged in the region since then.

After the country's reform and opening-up policy in 1978, the region's urban roads, drainage systems and public facilities were continuously enhanced and upgraded, Jiang said.

"Since the 18th National Congress of the Communist Party of China in 2012, the pace of urban construction in the region has been accelerating, and a comprehensive transportation system between cities has formed," she added.

By the end of 2020, there were six prefecture-level cities in the region, 146 urban towns and 326 square kilometers of built-up urban area, according to official statistics.

The permanent population of urban areas reached more than 1.3 million, nearly one-third of the region's population. The region's 14 counties including the cities of Lhasa, Nagchu and the Senge Khabab township in the Ngari prefecture have central heating.

Sonam Lhamo, a Tibetan resident from Gangdo township of Gonggar county, said she and her fellow villagers have benefited from the all-round social development of society in the last few decades.

When she was a child in the 1980s, her family lived on a steep hillside, there was not a proper road to her village, and they used yaks and tractors for transportation.

"We had to carry a wooden bucket on our back to fetch water from a water source. It was hard labor and took us at least 10 minutes of walking. Now all the villagers have facilities with running tap water in their yards," she said.

"Not only are all the households in the village and their fields accessible by vehicles, our hometown is also connected with railway, highway and flight."