Tibet leans on sci-tech for productivity 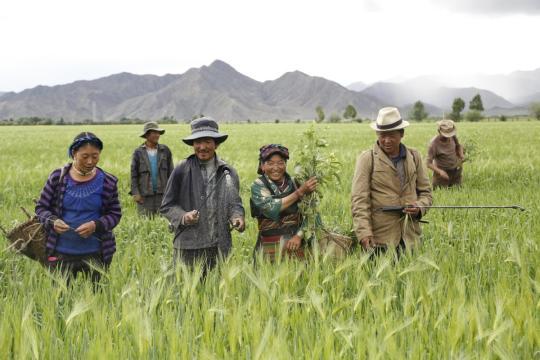 For a long time, more than 60 percent of Tibet's total research and development investment has been injected into these two areas, said Nordan, an official of the department, at a news conference on Friday talking about the region's achievements over the past seven decades.

With steady effort by science and technology workers, a large number of new technologies and equipment for agriculture and animal husbandry have been popularized and applied in the region.

A total of more than 150 new varieties of crops have been selected and bred, and the varieties have been improved. For example, highland barley has been updated three times, Nordan said.

As the main staple food and crop of the region, highland barley yields increased from about 80 kilograms per 0.06 hectares before the region's peaceful liberation in 1951 to 380 kg now.

With animal husbandry, the region has bred the Panbo-semifine wool sheep, the Plateau White Chicken and other new breeds of livestock and poultry, Nordan said. "By developing a number of unique new agricultural and livestock products, the region has made breakthroughs in core technologies."