Representatives from various ethnic groups and walks of life gathered in the Potala Palace square in Lhasa Thursday to celebrate the 60th anniversary of the campaign of democratic reform in Tibet. 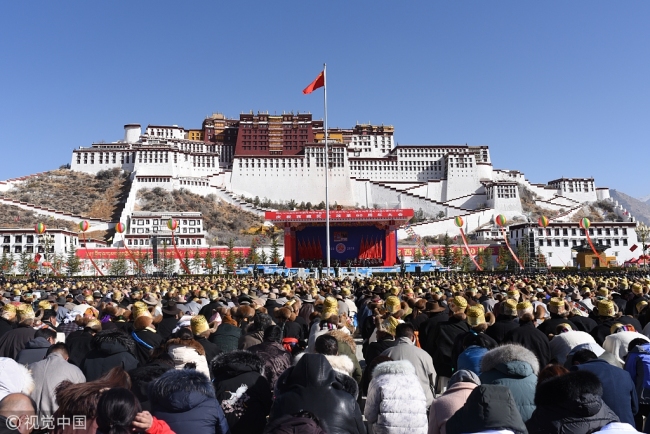 Representatives from various ethnic groups and walks of life gather in the Potala Palace square in Lhasa to celebrate the 60th anniversary of the campaign of democratic reform in Tibet, on Thursday, March 28, 2019. (Photo: VCG)

Tibet has made historic achievements and undergone tremendous changes since the democratic reform that started 60 years ago, said Wu Yingjie, Communist Party of China (CPC) chief of Tibet Autonomous Region.

In March 1959, the Chinese central government dissolved the aristocratic local government of Tibet and freed more than 1 million serfs, making them the masters of the nation and society.

The democratic reform completely obliterated the feudal serfdom of theocracy, changed the production relations of the old Tibet, smashed the shackles of feudal spirit and culture, and freed local people from feudal political oppression.