Four more books on the Epic of King Gesar have been published, as part of efforts to preserve the 1,000-year-old epic, according to researchers in Tibet Autonomous Region.

The Epic of King Gesar has about 200 episodes and is believed to be the one of the world's longest epics. It tells how an 11th century Tibetan demigod king conquered his enemies and helped the ordinary people. 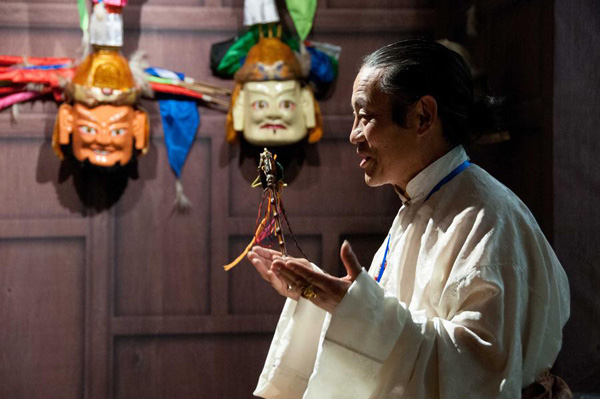 A storyteller in Sichuan Province performs the King Gesar in the traditional way. (Photo: Xinhua)

The epic has been passed down orally by singers, often illiterate herders or peasants from Tibet, Inner Mongolia Autonomous Region or Qinghai Province, who have often claimed they were spontaneously repeating the lines after a strange dream or serious illness.

One book is on the Tibetan mastiffs, two are about tribal wars during the King Gesar period, and the fourth is about how Gesar conquered a region and distributed gold to the people.

Each book is around 200,000 words. The books belong to a project called "Exclusive Renditions of Folk Artists on King Gesar," which aims to publish 20 books, chanted by 14 artists. So far, 14 books have been published.

Unlike the main stories of the epic, which are sung by various singers, the exclusive renditions can only be told by one or two artists.

Transcription, recording and video-making of the new stories started in 2009, according to Tsering Phuntsog.

The epic of King Gesar was listed as a World Intangible Cultural Heritage in 2009.

Some of the books in the epic are scheduled to be translated into Mandarin Chinese, according to Tsering Phuntsog.