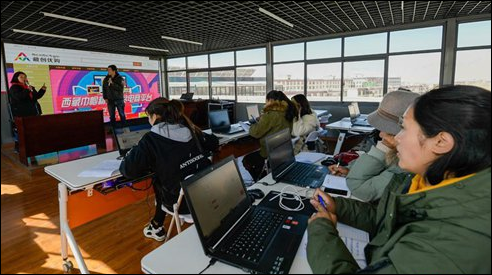 An e-commerce training course for poverty alleviation is held in Lhasa, capital of southwest China's Tibet Autonomous Region on Thursday.

The GDP of Southwest China's Tibet Autonomous Region grew about 10 percent in 2018, the 26th straight year its economy has recorded double-digit growth. Tibet's GDP in 2018 was estimated to be more than 140 billion yuan ($21 billion), Qizhala, chairman of the regional government, said in his government work report delivered Thursday at the second session of the 11th People's Congress of Tibet Autonomous Region.Local legislators also briefed huge development in social, ecological and religious sectors in Tibet in 2018, as well as progress in women's empowerment.A total of 180,000 people in Tibet were taken off the list of the poor, defined as per capita annual income of 2,300 yuan at 2010 prices. The regional government also vowed to lift the last 150,000 people out of poverty and eradicate absolute poverty this year, which marks the 60th anniversary of democratic reforms in the region.Women members now form 27 percent of Tibet's legislature and over 26 percent of the region's political advisory body. The figures starkly contrast the situation a half century ago, when "females, even those from elite backgrounds, had no right to education, not to mention political rights," Jampa Tseshi, a regional political advisor in Tibet, was quoted as saying by the China News Agency on Thursday. The biggest change in Tibet during the past century is that residents now identify themselves as citizens, instead of slaves after the liberation from slavery in 1951, Xiong Kunxin, an ethnic studies professor at Tibet University in Lhasa, told the Global Times on Friday. Support by the State and Party policy also empowered residents to strive for a better life, which also gave them a stronger sense of belonging in the region, said Xiong.While explaining the progress to the public, Tibetan officials also warned that the "hypocritical" side of the 14th Dalai Lama, who was regarded as a separatist and fled into exile 60 years ago, should be clearly noted. The 14th Dalai Lama ignored the remarkable progress made in such a short period and his remarks that Tibet has "no human rights and religious freedom" are complete nonsense, said a commentary published by Tibet Daily on December 13."No matter what kind of noises the 14th Dalai Lama makes, his narrative is losing the market and his support in international society has hit a record low as the Chinese central government's policy in the region has proven to be beneficial to residents," Hu Shisheng, director of the Institute of South and Southeast Asian and Oceania Studies in Beijing, told the Global Times on Friday. As a result of effective management of social and religious affairs, there are no major political accidents or self-immolations in Tibet since the deadly March 14 riot in Tibet in 2008, Hu noted. The March 14 violence in Lhasa claimed 19 lives and injured hundreds of civilians and police officers.Though some US politicians might continue to play the Tibet card against China in 2019 on issues like human rights, China should ignore those political tricks and focus on exploring diverse development approach to the region, said Hu.