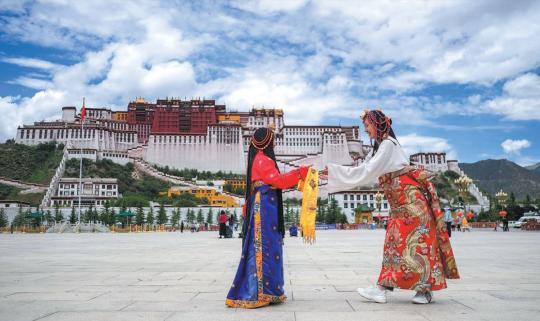 During the first three quarters of this year, the Tibet autonomous region's GDP reached more than 130 billion yuan ($20 billion)-up 6.3 percent year-on-year-placing its growth above all other regions and provinces in China.

The growth came despite the impact of the COVID-19 pandemic, which continues to ravage the globe.

In the first quarter, the region's GDP attained year-on-year growth of 1 percent, making it the only region to see a positive growth in China during the period, according to Xinhua News Agency.

For the first half of the year, the region's GDP increased 5.1 percent, the fastest among the 16 Chinese provinces and regions that saw positive economic growth.

To date, 540 Tibetan aid projects have been implemented in the region, thanks to the financial support. Funds allocated to help Tibet increased 51.3 percent year-on-year.

The growth was fueled largely by the bio-economic, tourism, digital and clean energy industries. The digital industry alone saw a year-on-year growth of 37 percent between January and September this year.

The Tibet Ningsuan Technology Group, with an investment of more than 11.8 billion yuan, is building the world's highest big data center in Lhasa, the regional capital.

"Since we started in 2017, the local government has given us a variety of support, which has largely accelerated the project," Jiang Ning, the company president, was quoted as saying by Xinhua News Agency.

Tourism, the region's traditional pillar industry, capitalized on the momentum. According to a statement from the regional government's website, Tibet received more than 8 million tourists in the first half of the year, ranking No 1 in tourism market recovery in China-up 27 percent year-on-year in May and 37 percent in June-after gaining control of the COVID-19 epidemic.

"There's a sharp growth in design and creativity services in the region's special traditional industries and green enterprises," he said. "The expansion of the creative industry market space shows Tibet's industries are growing toward refinement and green technology creativity."

In the last five years, Tibet's GDP growth led the nation with an average annual rate of 9.3 percent.

Thubten Khedrub, a professor from Tibet University, said if the region can maintain the trend, the economic gap between it and the rest of the country will quickly narrow.