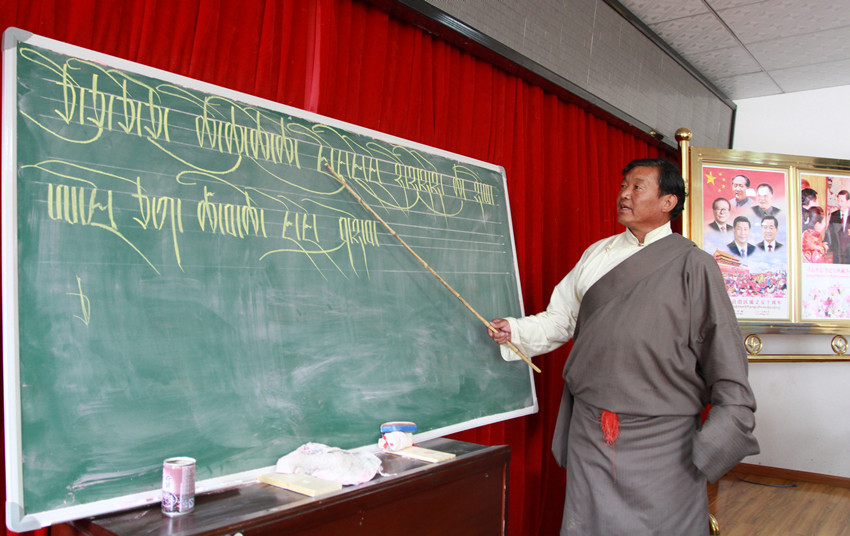 The 60-year-old Tibetan runs a mineral water factory in Shigatse, Southwest China's Tibet autonomous region. Though his own business was also affected, Phurjung did not hesitate to donate for the anti-epidemic cause.

He also allowed tenants of his stores from different ethnic groups to be exempt from paying rent for two months.

"I myself am a beneficiary of ethnic unity, so it was not a hard decision to make," Phurjung said.

Phurjung, born into a Han-Tibetan family, lives in a community called Changlo Khangsar, where 13 ethnic groups, including Tibetan, Han, Hui and Mongolian people, live in harmony.

Located in the business area of Shigatse, the second-largest city in Tibet, Changlo Khangsar originally got its name from a local wealthy family. 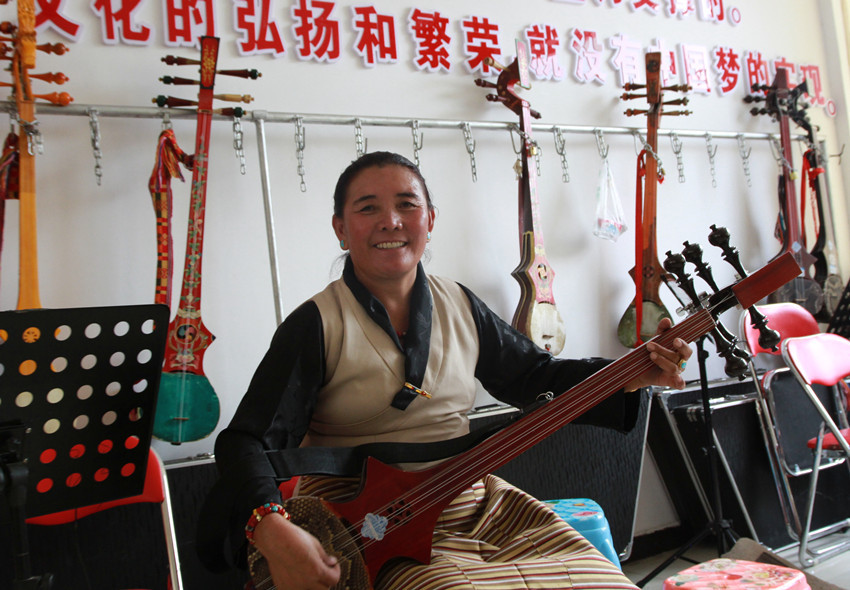 A local resident learns to play an instrument at the Changlo Khangsar community in Shigatse, Southwest China's Tibet autonomous region.

Ma Gadong, another resident in the community, shared Phurjung's feelings.

Ma, an ethnic Hui, married a Tibetan woman. The couple is now running a clothing business in the regional capital Lhasa and is planning to set up another in Shigatse. Out of a willingness to help others, he promised his community neighbors that his factory is always ready to hire whenever they need a job, no matter what ethnic group they are from.

"Every time when someone in our community encounters a difficult situation, brothers and sisters of different ethnic groups here are always the first for them to turn to," said Tseten Yangkyi, head of the community residents' committee.

On June 2, the local day of ethnic unity and progress in Shigatse, people from different ethnic groups in the community got together to celebrate the day and exchanged their views on ethnic unity.

"I remember that older people in our community told us that they had been serfs suffering from serfdom, torture and insults, and it was the Communist Party of China that had liberated them from the miseries," Phurjung said. "They also told us that without the CPC there would be no happy life as we are living today, and we must always be grateful to the Party and maintain in unity."

In 1959, the CPC led the people in Tibet to launch democratic reform, abolishing Tibet's feudal serfdom under theocracy and liberating over 1 million serfs in the region.

The community residents also gathered to celebrate the CPC's founding anniversaries each year on July 1. The celebrations usually ended with a bustling party, which is also to celebrate the birthday of resident Paseng, who was born on the same day.

For Phurjung, taking his grandchildren to the national flag-raising ceremony every Monday has become a routine during the kids' summer vacation.

"Now, my grandchildren can sing the national anthem very well, and they speak very good Mandarin as well," Phurjung said, with a proud look on his face.