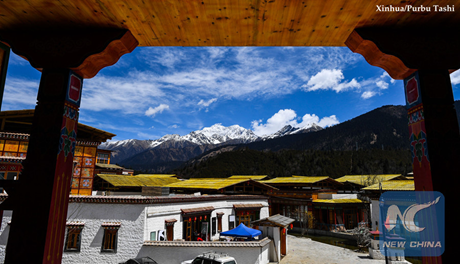 Southwest China's Tibet Autonomous Region announced that it received 216,400 tourists in the first four days of the Chinese New Year of the Dog, a 30.7 percent year-on-year increase, after the local authorities rolled out a series of incentives to subsidize tourists traveling to the region. The number of tourists to Lhasa and Nyingchi Prefecture, the region's two main tourist destinations, saw an increase of 50 percent during the holidays, news site thepaper.cn reported on Monday.  Average hotel occupancy around Potala Palace and other major tourist spots reached 50 percent, occupancy of international hotels and residential accommodations went above 80 percent. And the region saw revenues of 159.08 million yuan ($24.3 million) from tourism, a 14.7 percent increase from last year, thepaper.cn reported.   According to the report, a campaign was conducted by the local government from February to the end of April aimed at attracting tourists.  As part of the campaign, all Class A tourist attractions in the region will be open to the public for free, and tourists who enter Tibet in the winter season receive extra subsidies on transport and accommodation.  Companies that organize group travel to the region will receive cash rewards, including 100,000 yuan for every chartered flight carrying more than 100 travelers.  The reward will double if the number of travelers is over 200 in a single chartered flight, and could go up to 250,000 yuan if special trains or flights to Tibet carry more than 400 people. The Tibetan New Year, or Losar, coincided with Chinese New Year on February 16 this year.