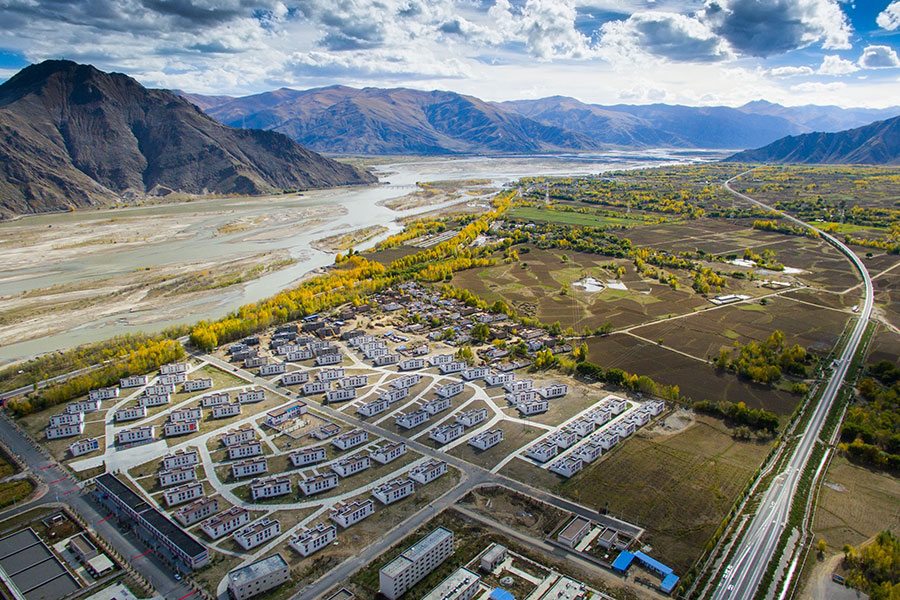 The Sanyou village in Chushul county, Tibet autonomous region, is home to 184 families of more than 700 Tibetan people, who were once impoverished. Their lives have been improved through relocation to the village. (Photo: Xinhua)

The Tibet autonomous region has made historic achievements in urbanization over the past seven decades, and the people of the region have been enjoying heavily upgraded infrastructure, the region's department of housing and urban-rural development said on Thursday.

Before the region's peaceful liberation in 1951, Lhasa was the only semi-urbanized town with a total urban area of less than 10 square kilometers and a population of more than 10,000, Jiang Yuexia, deputy head of the department, said at a news conference on Thursday.

"In the 1950s, the region only had an urban population of less than 70,000, and its urban function and infrastructure level were very underdeveloped," she said.

After 1951, the government made great efforts in the construction of urban roads, housing, electricity and other infrastructure.

Since then, thanks to the special care and heavy financial support offered by the central government and provinces, urbanization in Tibet has leaped forward.

After the country's reform and opening-up policy in 1978, especially since the central government implemented assistance to Tibet, urban construction of the region witnessed rapid development, and the region's urban roads, drainage system and public facilities had been continuously enhanced and upgraded, Jiang said.

"Greater changes have taken place especially after the 18th National Congress of the Communist Party of China in 2012. The pace of urban construction in region has been accelerating, and a comprehensive transportation system between cities has been formed," she added.

By the end of 2020, the number of prefecture-level cities in the region reached six, the total number of the region's urban towns has reached 146, and the urban built-up area reached 326 square kilometers, according to official statistics.

The permanent population of urban areas reached more than 1.3 million by 2020, accounting for nearly one-third of the region's population, with an urbanization rate higher than 35 percent.

The region's 14 counties, including the cities of Lhasa, Nagchu and the Senge Khabab township in the region's Ngari prefecture had fully built out central heating coverage by 2020.