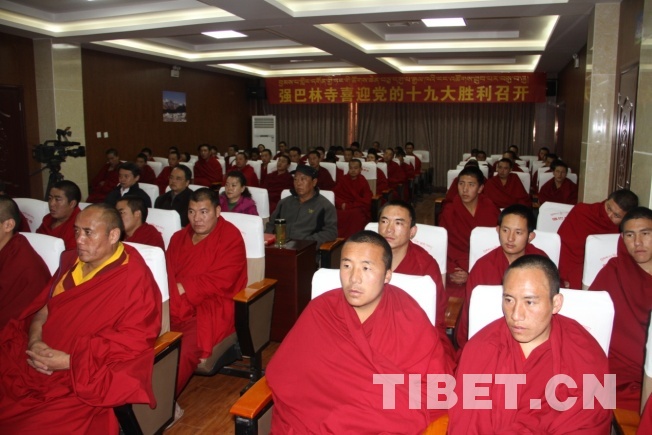 Tibetan Buddhist monks and nuns in Qinghai and Sichuan provinces were recently organized to study the report to the 19th National Congress, which experts said on Tuesday would help maintain regional stability and combat the Dalai Lama clique's separatist activities.

The governments of Northwest China's Qinghai Province and Southwest China's Sichuan Province reportedly provided training and literature on the 19th National Congress of the Communist Party of China (CPC) for Tibetan Buddhist monks and nuns more than a month after the Party congress was held in Beijing in October.

Xi Jinping, general secretary of the CPC Central Committee, said in the 19th National Congress report that "we will uphold the principle that religions in China must be Chinese in orientation and provide active guidance to religions so that they can adapt themselves to socialist society."

Leaders from five religious communities - Buddhism, Taoism, Islam, Catholicism and Protestantism - reached a consensus in September that "the direction of religions is to integrate them with Chinese culture," the Xinhua News Agency reported in September.

"The CPC sticks with a dialectical materialist point of view but religious people hold theism, which doesn't contradict each other. Studying the report to the 19th National Congress won't make religious people change or abandon their beliefs," Zhu Weiqun, chairman of the Ethnic and Religious Committee of the National Committee of the Chinese People's Political Consultative Conference, told the Global Times on Tuesday.

"It is vital for religious people to understand and follow the CPC's policies, especially as the Dalai Lama clique attempts to permeate Tibetan Buddhism with separatism," Zhu said.

China has strengthened management of monasteries in the fight against the Dalai Lama group, including sending officials who are responsible for helping handle affairs in monasteries, Xinhua reported in March.

Zhu also pointed out that some foreign media or forces always criticize China's religious policies, but "they have little knowledge of China's situation and have no right to make irresponsible statements about our religious policies."

It is essential for religious people to understand the report to the 19th National Congress, which would also help maintain regional stability, experts said on Tuesday.

The Qinghai provincial government had distributed 400,000 copies of publicity materials on the CPC's 19th National Congress to the public, grass-root Party members as well as monks and nuns from monasteries in the province, Qinghai Daily reported.

"The CPC has the leadership over all national affairs, including religion. Only with the guidance of the CPC and the report to the 19th Congress can religious regions enjoy further development and prosperity," Su Wei, a professor at the Party School of the Chongqing Municipal Committee, told the Global Times on Tuesday.

"Almost every citizen in China is studying the report to the 19th National Congress as it relates to our daily lives and the interests of every ethnic group, not just religious people," Zhu said.

"Under the CPC's religious policies, ethnic and religious regions in China have significantly developed and prospered. We have a long-term tradition of studying the Party's policies and the tradition shall continue," Zhu said.

The Qinghai government also sent a publicity group to lecture on the essence of the 19th National Congress, covering all Tibetan Buddhist temples in the region, Qinghai Daily reported.