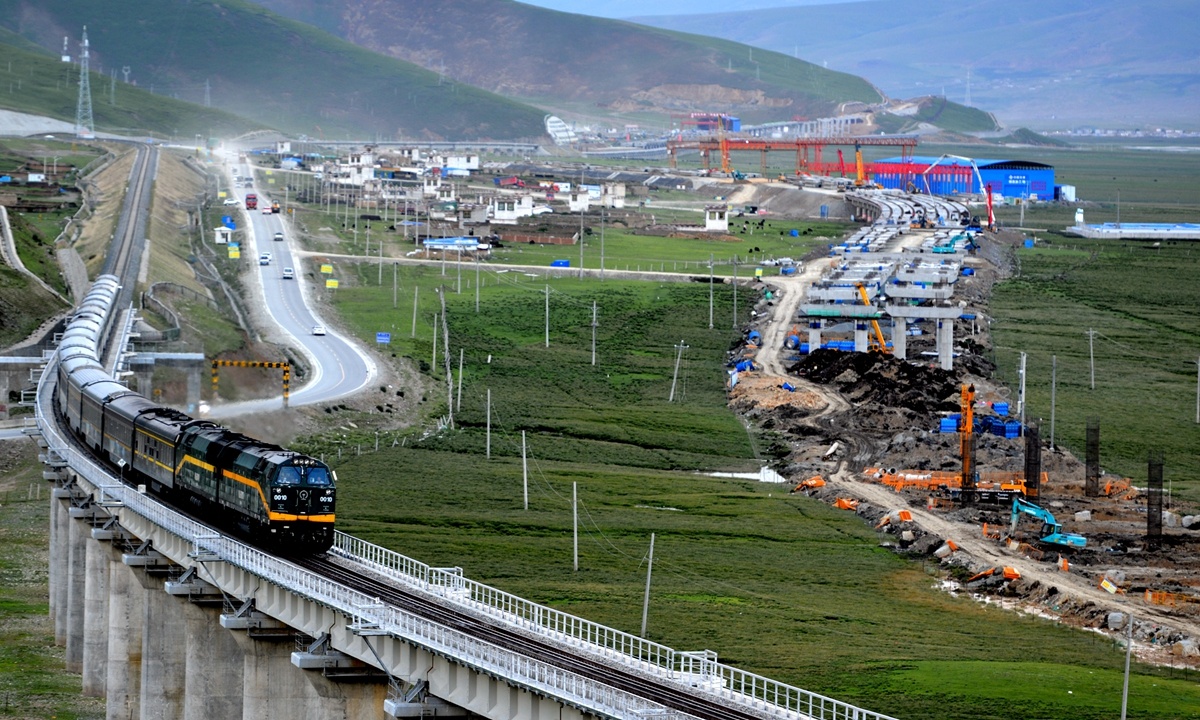 A passenger train passes a section of road renovation from Nagqu to Lhasa in Tibet in August 2019. (Photo: cnsphoto)

Jiaqu could barely speak any Putonghua, the standard Chinese national language, but he was eager to share with the Global Times reporter his excitement and gratitude for moving to his current home.

"I never dreamed that I would one day live in such a nice home," Jiaqu said in Tibetan via a translator, sitting in his meticulously decorated two-storey home. The not-so-stout Tibetan man greeted visitors with a coy smile from his first floor living room.

Jiaqu, 30, only attended primary school. Before moving to this house two years ago, he did not own a house and could only rent one.

"My living conditions were extremely poor at that time. My family could not even afford to buy meat back then," he recalled.

When setting foot into Jiaqu's new house, the Global Times reporter found it well decorated with both Tibetan-style furniture and modern amenities including a TV set and a refrigerator.

He told the Global Times he spent more than 30,000 yuan ($4,315) purchasing decorations and furniture, but he barely spent any money buying the new house as it is the government's welfare housing to improve the living conditions for those in poverty.

Jiaqu's case is common in Chidu town, Qamdo, Southwest China's Tibet Autonomous Region. The town has built 187 houses at the relocation site for the poor. "Relocation is just a method and poverty alleviation is the goal," a local official said.

Relocation programs to eradicate absolute poverty are part of the strategy being applied in Tibet where many places are not livable. In addition to providing new homes, the local government also opened some vocational skills training classes to help people acquire working skills. 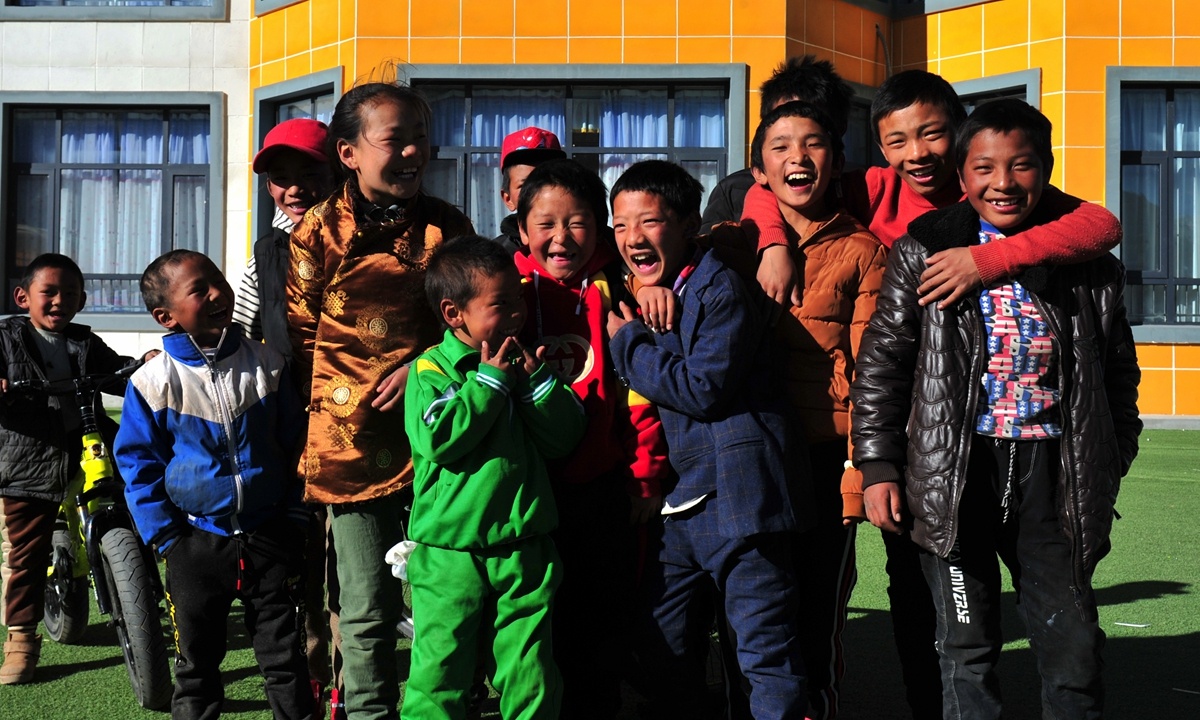 Jiaqu told the Global Times he is quite satisfied with his current life. He and his wife now work as ecological forest rangers to protect the environment and make about 7,000 yuan a year. He also bought a car last year for his part-time job helping companies and people transport their belongings. He made more than 20,000 yuan from transportation last year. The family also digs caterpillar fungus to sell.

The caterpillar fungus, known as "worm grass" in China used in the traditional Chinese medicine, is only found in high-altitude regions, especially in the Qinghai-Tibet Plateau.

During the interview, Jiaqu repeated several times that his current life is like a "dream" to him. "I have no living pressure now. The life is so good to me," he said.

In the relocation site, most people living here are Tibetans. Renqingsangbu, 50, also lives here with his family in a two-storey building.

Before relocation, the five-member family lived in an adobe house. Renqingsangbu recalled when there were strong winds outside during the winter, the inside was also windy, and when it was raining outside during the summer, it also rained inside.

While some Western media outlets claimed relocation programs helping Tibetans are efforts to make room for the immigration of Han people and that Tibetans are unwilling to move, Renqingsangbu firmly rejected such accusations, saying he was so pleased to move to a such better place. Jiaqu also expressed similar views about the relocation.

Renqingsangbu's family's life has greatly improved since the relocation. He has bought a used car which cost him more than 30,000 yuan. His eldest son now studies at a senior high school in Qamdo, the second son is in junior high school and his youngest son is 2-year-old.

While he did not receive much education, he expressed hope his sons can get enrolled into university one day. Thanks to the country's preferable policies toward minority groups in Tibet, the students don't need to pay their tuition fees and their living expenses from kindergarten to high school are also covered by the government.

Renqingsangbu told the Global Times the government has helped him a lot. While he is disabled, he has good sewing skills, and the local government is now considering soliciting him to make the schools' students uniforms.

He said he is optimistic about the future and believed his life will become better. Global Times learned that Qamdo also organized vocational skills training classes for these people which include learning how to operate excavators. 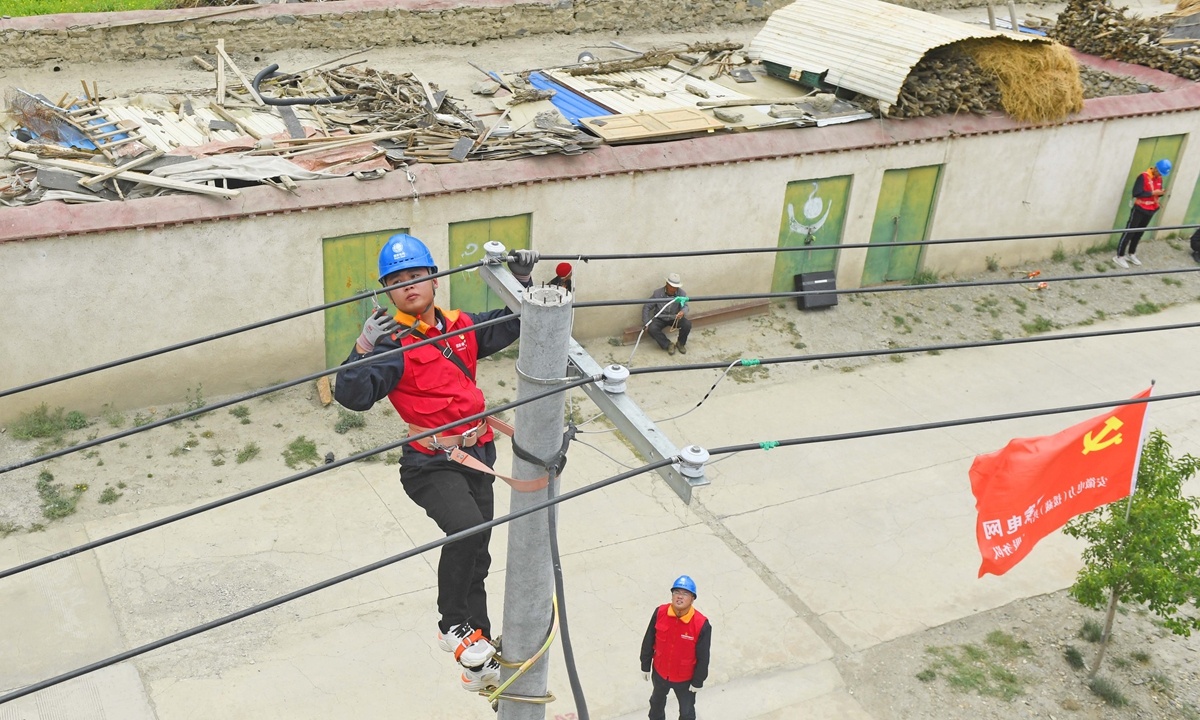 Zewang Norbu, Party secretary of Chidu Town, said they have so far built 187 houses. He said except for a few elderly people who were not so willing to move at first, most people are satisfied about relocation.

For those who did not quite understand the program, the local government promoted information to spread awareness of the benefits.

Ao Liuquan, Party secretary of Nagqu, told a media press conference that relocation programs are for people who live in places that cannot support their livelihood.

So far, 20,877 households and 85,350 people have been included in the relocation programs in Nagqu, where the high altitude makes life extremely difficult.

Ao said the relocation not only helps these people, but is also good for the fragile environment. In the high-altitude plateau, the relocation can alleviate people's destruction of grassland.

"The ordinary people gained great satisfaction after relocation. It's win-win for both citizens and environmental protection," he said.