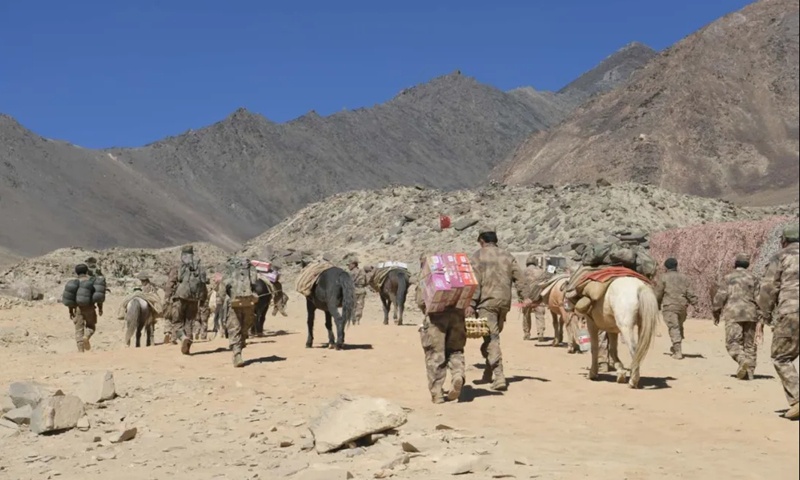 Besides using advanced technologies like drones, Chinese troops, including Tibetan militia transport units, also use mules and horses as a practical approach to deliver supplies to troops stationed at high-altitude bases with harsh environments near the border.

A transport unit consisting of Tibetan militia troops based in Rutog county in Ngari prefecture, Southwest China's Tibet Autonomous Region, has been delivering supplies to the troops of the Chinese People's Liberation Army (PLA) Xinjiang Military Command stationed at an elevation of more than 5,000 meters, according to an article the command released on Tuesday.

For decades, the troops of the Xinjiang Military Command have been based in the toughest places in Xinjiang and Tibet, protecting the people there. Many are stationed in high mountains with challenging terrains and without mobile phone signals or access to modern transportation methods, the article said, citing a county official.

The Party committee and government of the county issued orders to provide goods and materials to the PLA troops at all cost, the official said.

"We will support the PLA, which has been safeguarding us, with all we've got. The PLA troops based high in the mountains are facing even harsher conditions than we are," Tibetan militia soldiers were quoted by China Central Television as saying on Wednesday.

The PLA is also using advanced technologies like drones in providing logistical support for soldiers stationed in remote regions, but for some locations where supplies are needed in large amounts but cannot be delivered with modern infrastructure, traditional means like mules and horses are more practical, analysts said.

It also shows the close relations between the Tibetan people and the PLA, netizens said.

"Respect to troops stationed in the harsh environments of the plateau regions," typical online comments read.