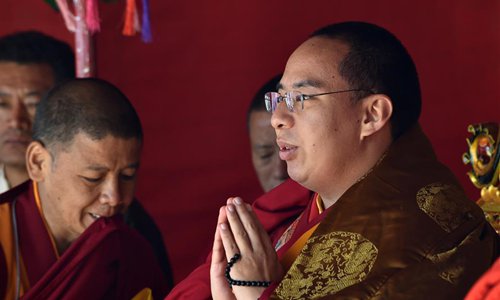 Some 100 Tibetan Buddhist monks attended a training session on reincarnation for a living Buddha in Southwest China's Tibet Autonomous Region, which includes government regulation on management of the reincarnation system, and was hailed by Chinese experts and officials as a necessary method to maintain religious harmony in the region.

The training session, launched in Lhasa on Friday, also covers the history and rituals for the reincarnation of the living Buddha.

Trainees came from Tibetan Buddhist monasteries including the Sera and Drepung monasteries, tibet.cn reported on Saturday.

The training session was organized by the Institute of Socialism in Tibet, the Tibet Buddhist Association and regional authorities in charge of religious affairs.

The training will last 7 to 10 days, a staff member of the Tibet Buddhism College in Lhasa, told the Global Times on Sunday. He requested anonymity.

Suolang Renzeng, a deputy chief of the Chinese People's Political Consultative Conference Tibet Autonomous Regional Committee, said at the training that the reincarnation system is "never a religious-only issue or a living Buddha's personal right" but an important representation of the Communist Party of China's strategies and policies in the region.

The training will help implement these strategies and policies and achieve religious harmony in the region, he said.

China issued Measures on the Management of Reincarnation of Living Buddhas of Tibetan Buddhism in 2007 to institutionalize the reincarnation process, according to a white paper on democratic reform of Tibet released in March by China's State Council Information Office.

By 2018, 91 incarnated Living Buddhas had been confirmed through traditional religious rituals and historical conventions, said the white paper.

Suolang Renzeng also introduced the history of the reincarnation system.

Originating in the 13th century, reincarnation was adopted by the Gelug sect of Tibetan Buddhism in the mid-16th century and gradually embraced by other sects.

Both Qing Dynasty (1644-1911) and the Republic of China governments had regulations on the selection and approval of living Buddhas, he said.

Bianba Lamu, head of the South Asia Institute of the Tibetan Academy of Social Sciences, noted that holding such a training session suggested that reincarnation, written in government regulations and embedded in Tibetan Buddhism, will be carried out properly and not affected by any individual or the "Dalai Lama's separatist clique."

The Dalai Lama in 2014 said that the Tibetan Buddhism tradition of reincarnation should cease with his death.

Lamu told the Global Times on Sunday that the training session could educate key figures in Tibetan Buddhism to lead the religion in the direction of better compatibility with socialist society.

Lamu said that strict regulations and implementation can encourage living Buddhas to take their social responsibilities and help rule out monks not deserving the title of Living Buddha.