By PALDEN NYIMA and DAQIONG in Lhasa | CHINA DAILY 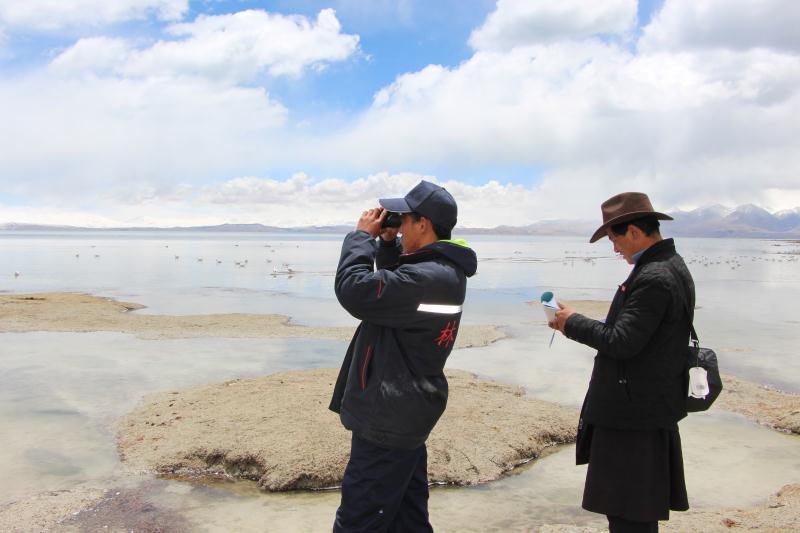 Two rangers of Lake Manasarova in Tibet during their patrol around the lake, May 10, 2018. (Photo: China Daily)

Tsering Samdrup works as a ranger in the Samdruptse district of Shigatse city, Tibet autonomous region. The job offered by the local government helped him get out of poverty and also helped improve the fragile environment.

Over the last five years, Shigatse has allocated more than 2 billion yuan ($305 million) for environmental protection, benefiting more than 720,000 impoverished residents, according to the city's poverty alleviation office.

Tsering Samdrup's job includes collecting waste scattered around the village and nearby grassland and helping damaged grassland recover. He took the job in 2016 when local authorities started providing subsidies to encourage poor farmers and herdsmen to work as rangers to protect the environment. The subsidies were a measure aimed at balancing poverty alleviation work and ecological protection.

That year, Tsering Samdrup, his mother and his wife each received a subsidy of 3,000 yuan from the government. Since 2018, the amount has risen to 3,500 yuan a year.

"Now we have enough money to deal with medical expenses for my grandmother, who suffers from a severe leg disease," he said. "I also can better support my three kids."

Tsering Samdrup is grateful to be living in a dramatically cleaner village as a result of the efforts. "The air is fresher than before," he said. "Locals are more aware of environmental sanitation and protection."

Before 2016, very few villagers collected garbage in public places. Many even chopped trees for firewood, with no idea that trees were crucial to the ecology and are very hard to grow or plant at such a high altitude－3,800 meters.

When waste collection began, a cooperative dealing with disposable waste was established in the village, with employees from 60 local households. In 2019, each household earned an income of 6,000 yuan.

In 2016, the regional authorities adopted the central government's preferential environmental protection policies and published the 13th Five-Year Plan for Ecological Protection Subsidies in the Tibet autonomous region (2016-20), which encouraged poor farmers and herdsmen to work as rangers to protect the region's forests, grasslands, nature reserves, streams, rivers and lakes.

Sonam Tsering said he has been working as a ranger in Markham county, in Chamdo, Tibet, for about 20 years to help protect the Yunnan snub-nosed monkeys in the county's national reserve for the species.

Sonam Tsering said his work earns him a better and more stable salary than before because of the subsidies. He goes on patrol at least three times a month and said it is rare to find people hunting animals "because most villagers have joined the preservation work themselves".

"When villagers see these monkeys, they prefer to take detours rather than bother them," he explained.

He said there were only around 150 Yunnan snub-nosed monkeys in the 1970s, and now there are around 800 thanks to intense protection efforts.

"In the past, the Yunnan snub-nosed monkeys were noticeably wary of people. Now they are getting closer to humans, and even willing to be photographed."