In January, Thubten Gyatso from Moding village in the Garze Tibetan Autonomous Prefecture in Southwest China's Sichuan Province, went to Hainan Province for the first time in his life, where he attended an awards ceremony for rural teachers. 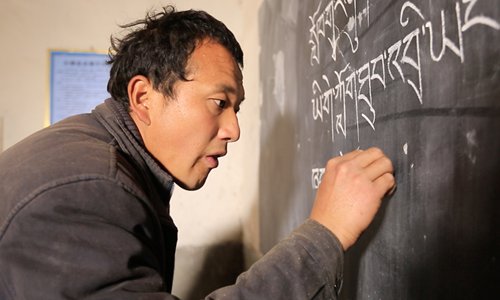 Together with 100 other teachers from China's rural areas and 20 headmasters of rural schools, Thubten Gyatso received an award for what he has done for students from Moding village, located in a mountainous area 2,600 meters above sea level between Sichuan and Yunnan provinces.

In September 2015, Alibaba Group founder Jack Ma Yun started a program to sponsor rural teachers. His Jack Ma Foundation then launched a Rural Teacher Award to honor the 100 top teachers around China each year and offer each of them 100,000 yuan ($15,000) and professional training for three years.

In order to attend the ceremony in Hainan on January 13, Thubten Gyatso had to leave Moding village on January 10, ride a mule to Xulong county, and walk for two hours to Simaoding in Yunnan Province. From there, he took a bus to Shangri-La county and flew to Sanya, a tourist city of Hainan.

"Without Jack Ma's campaign, I wouldn't have had the chance to go to Sanya. I wanted to see what the sea and big city are like," Thubten Gyatso said.

Before leaving for Hainan, Thubten Gyatso told his students to work hard and do their homework.

Born in 1986, Thubten Gyatso has worked in Moding village school for eight years. His only colleague is Tashi Chophel, who was also Thubten Gyatso's teacher when he was a student at the school.

When Thubten Gyatso was a child, he severely injured his right leg while walking in the mountainous roads and ended up having to use an artificial limb. After graduating from middle school, he was forced to end his education.

"I was heartbroken, but there was no way for me to continue my studies. When I had time, I learned the Tibetan language by myself," Thubten Gyatso said in a video interview released on iqiyi.com.

The disability also meant Thubten Gyatso could not do any physical work. His teacher Tashi Chophel suggested he work at the school to earn some money, and more importantly, to teach the children.

"I asked Tashi Chophel how much a teacher could earn a month. He said that the monthly salary is 500 yuan. I was worried about whether I was qualified to teach the children, as they might be naughty, and he said that teaching could help me earn a living. He also said that teaching these children to read and learn is good for them," Thubten Gyatso said.

Thubten Gyatso said that he was a little nervous on his first day as a children's teacher and had no idea how they would treat him. But now he spends a great deal of time with these children. He teaches them in the classroom and plays ping-pong with them in the playground.

"I know Thubten Gyatso very well, as he was my student. I know he will fulfill his responsibilities as a teacher. He will definitely be my successor as a teacher in the school. We have worked as colleagues for eight years, and he's never disappointed me," Tashi Chophel said. 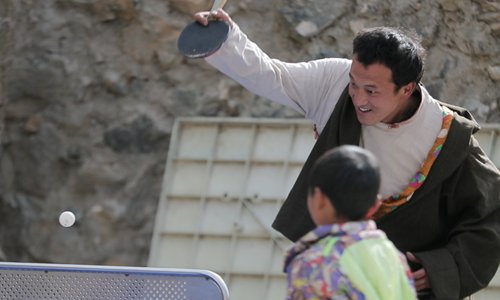 Thubten Gyatso, a teacher from the Moding village school in Garze Tibetan Autonomous Prefecture in Southwest China's Sichuan Province, plays with his students.

Every morning, Thubten Gyatso gets up at around 6 am. After finishing some housework, including milking and feeding the pigs, he sets off to the school before 8:30 am.

He prepares thoroughly for Tibetan language and Putonghua lessons and keeps a dictionary nearby to better answer students' questions.

The school is located near the students' houses, which gives them more time to spend at school so that they can develop a variety of interests. They also have a good relationship with the two teachers and often play chess or do sports together.

The school in Moding village was established 40 years ago. The classroom where Thubten Gyatso teaches is simply furnished, and most rooms are equipped with four desks for students and one desk for the teachers. The two-story school building was built by local residents more than 10 years ago. There is a basketball court and ping-pong table at the cement playground.

This is where Thubten Gyatso and his students live and study.

"All the children are very interested in learning. These children have done well in their studies and can also get better scores when they go to middle schools in the county," Thubten Gyatso said.

"I've always told them to study hard. If they don't work hard, they could have hardships in later life. If you gain more knowledge, you can pass some of that wisdom to the next generation," Thubten Gyatso said.

Thubten Gyatso has to ride a mule to go to Xulong county to get textbooks, notebooks for students and teaching materials, including chalk. He takes turns doing this task with Tashi Chophel.

Thanks to the persistence and hard work of Thubten Gyatso and Tashi Chophel, children from Moding village have started to learn how to spell their names in pinyin and are now furthering their studies. A total of 26 children from the 43 households in the village have gone on to study at college over the years.

"I want to go on teaching students the way I am now," he said with a shy smile.