By PALDEN NYIMA and DAQIONG in Lhasa | CHINA DAILY

Because its harsh environment is one of the main causes of poverty, the Tibet autonomous region has been striving to relocate residents to more inhabitable places as a key part of its poverty alleviation efforts. 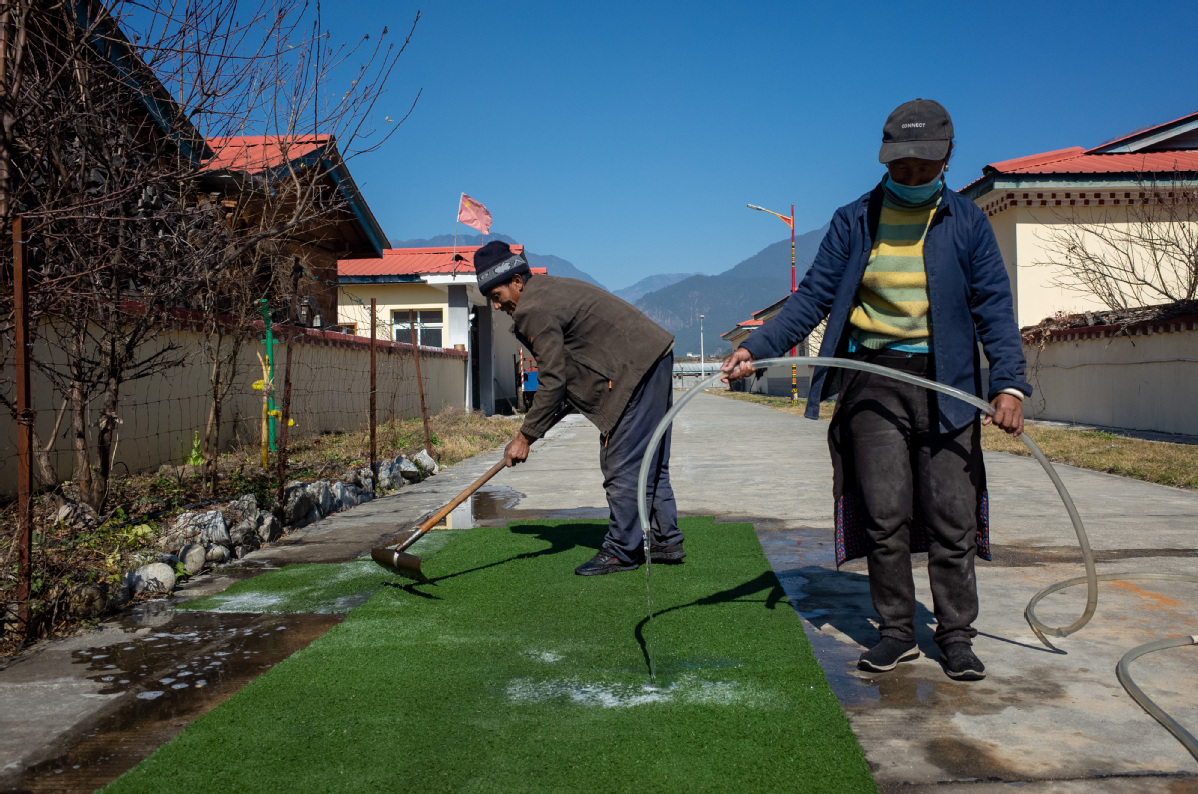 More than 260,000 residents have been relocated to more inhabitable places in the region over the past five years, according to the region's latest government work report

Unlike most of the region's resettlement projects, which address problems related to living in inhospitable places at extremely high altitudes, the project in Bupal village, Zayul county, Nyingchi, is helping families deal with limited resources.

With an investment of more than 70 million yuan ($11 million), the project involves 365 people in 65 households who were moved from Tsawarong－a remote, impoverished township in Zayul county lacking farmland－in 2015.

Village officials said the residents were mainly from Bupal, but also included villagers from Tsawarong's five other villages. The new resettlement in Zayul is also named Bupal.

In Tsawarong they lived on a mountain slope and often had trouble with transportation, housing and obtaining safe drinking water.

The new location has an average altitude of 1,600 meters and a subtropical monsoon climate. With adequate rainfall throughout the year, it is suitable for raising crops.

In the new Bupal, the villagers have been provided with new houses, safe drinking water and other basic facilities such as schools, clinics and libraries.

Villager Adi said that before relocating, his family lived on the shoulder of a big mountain, where the transportation was so inconvenient that it took him two days to travel from his village to the township seat. Farming was the only source of income for his family.

"It took me two hours walking from my home to the unirrigated field, cultivating the crops by using mules and horses, and people also carried things on their backs," Adi said.

"There was no hospital in our village before 2015, and we had to walk or ride a horse for up to two days to get to the township for our medical needs," he said, adding that the hospital was 20 kilometers away from the village. "Now we have a clinic in the village with two medics working here every day."

"In the past, the school was so far away that the dropout rate was high in the village," he said. "Many people were reluctant to go, but now, going to school is much more convenient."

To earn money, many villagers are now participating in a fruit plantation cooperative, and they also receive border subsidies.

Last year, each villager received a dividend of 1,200 yuan from the co-op. Adi's family received 6,000 yuan, as his family has five people.

"I am pleased with the new relocation site," he said. "Here, we live in a better house which is brighter, has more space and is more comfortable."

Adi said the new house also has a bathroom, which is clean and convenient, and there are more rooms, so his family has more private spaces.

"Benefiting from an overall lift by living in a new relocation site, the variety of our diet has also increased," he said. "Instead of just having barley or corn dishes, now we have more choices on our dining table."