LHASA, Feb. 4 (Xinhua) -- Tibetans have spent a busy Monday preparing for Losar, or Tibetan New year, which coincides with the Lunar New Year this year. 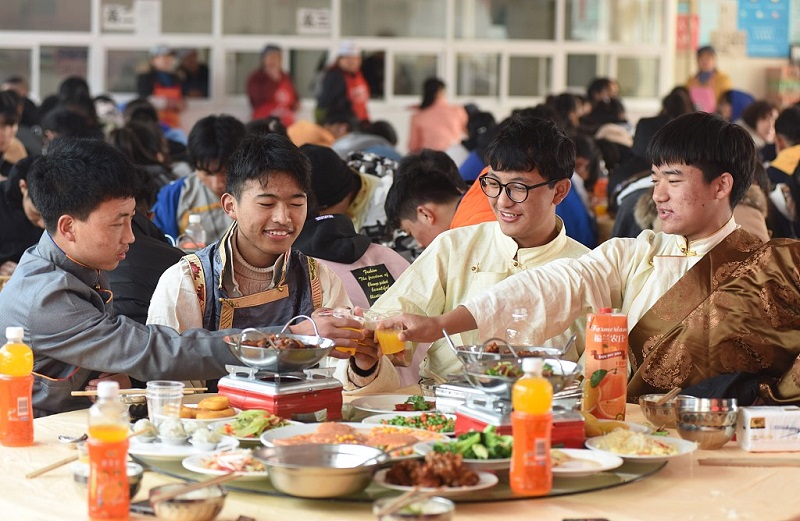 Early in the morning, Tseringtso, 60 living in Lhasa, capital city of Tibet Autonomous Region, assigned jobs to do among her family members -- some in charge of shopping, some cleaning, and some decoration.

Monday marked the eve of the upcoming Losar on the Tibetan calendar. The Tibetan New Year is normally celebrated by religious rituals, long prayers, horse races, family gatherings and feasts.

Standing in front of the "Qiema," a two-tier rectangular wooden box containing roasted barley and fried wheat grain, Tseringtso said the decorations on the table -- ears of wheat, a porcelain sheep head, and a pot of highland barley, dates, air-dried beef, candies, nuts, butter, and brown sugar -- symbolize harvest in the next year.

In Gatso Township under Tsonyi County, about 5,000 meters above the sea level and some 1,000 km from Lhasa, 20 officials were preparing dinner around a Tibetan-style coal stove.

"Both Tibetan and Han officials watched the Tibetan New Year gala and had guthuk, a traditional snack similar to a dumpling, last night. Tonight, we gathered again to watch the Lunar New Year gala and marked the happy occasion," said Sun Chao, deputy Party head of the township.

At the foot of Mt. Gang Rinpoche, regarded as one of the holiest destinations by Buddhists, herders in Ngari reunited with their families and friends, despite the fact that they have just celebrated their own New Year a month ago.

"Our village has already shaken off poverty in 2017. But the villagers will continue to work diligently to improve their living conditions in the new year," said Jigme Dorje, village head of Gangsha, Ngari.

Days of religious services have come to an end in Champa Ling Monastery in Chamdo, a city about 1,200 km from Lhasa. On the New Year's eve, Tenzin received his parents who came all the way from the regional capital.

"As a monk, I feel blessed to celebrate the festival with my family. I wish an even brighter future for Tibet," he said.