CHINA Tibetans with joint disease get help at Beijing hospital

Tibetans with joint disease get help at Beijing hospital 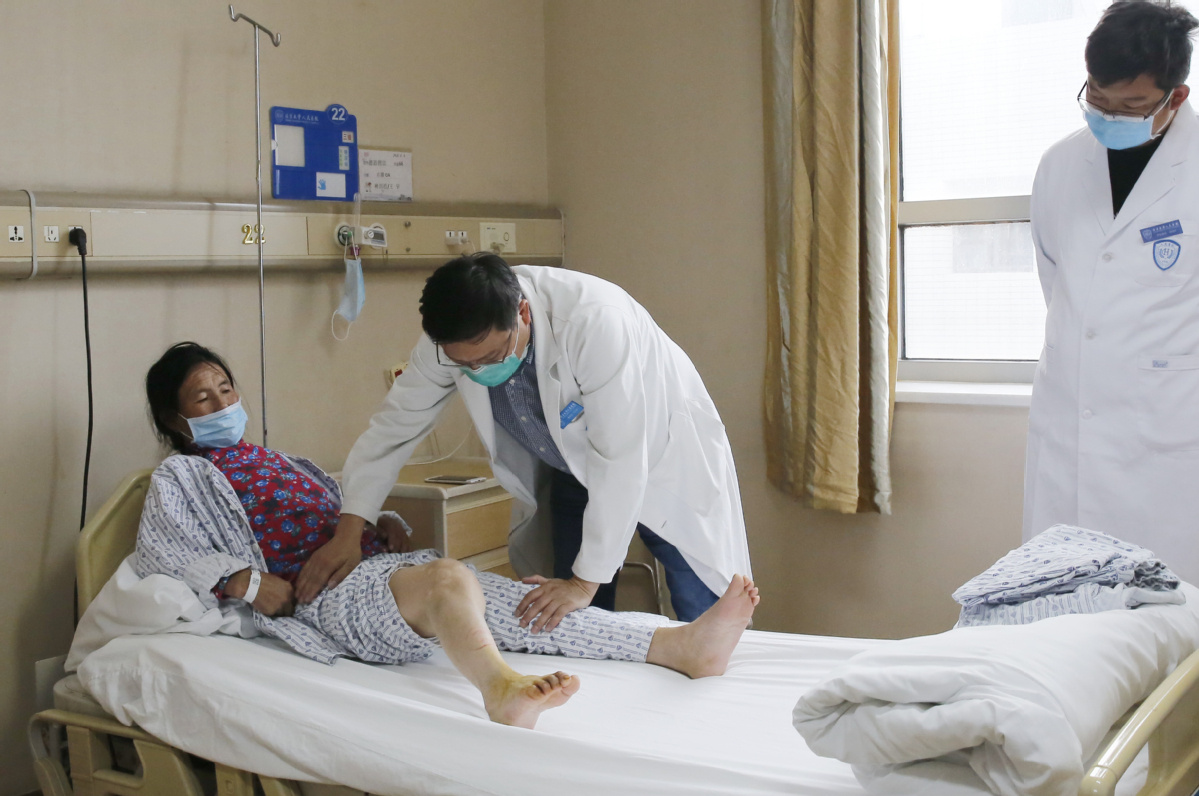 Lin Jianhao, director of the bone and joint department of Peking University People's Hospital, examines a patient from the Tibet autonomous region with Kashin-Beck disease on March 3 in Beijing. Photo provided to CHINA DAILY

After traveling more than 2,800 kilometers from Lhorong county in the Tibet autonomous region, a dozen Tibetan patients with Kashin-Beck disease, a disorder of the bones and joints, arrived in Beijing earlier this month to receive free treatment at Peking University People's Hospital.

They were accompanied by their families and employees from the county's health commission and a hospital in Lhorong.

Lhorong, in the southeastern part of the Qinghai-Tibet Plateau, has rainy as well as dry seasons each year, along with long, cold winters. It is among places in China with high prevalence of Kashin-Beck disease, which is characterized by stiff, deformed joints, shortened limbs and short stature due to necrosis during childhood and adolescence of growth plates of the bones.

Supported by the China Overseas-Educated Scholars Development Foundation and the Beijing Joint Care Foundation, 58 patients from the county have been provided with free treatment in recent years. The beneficiaries are mostly from the county's rural areas, and most are adults.

"We cover all costs, including flight tickets, bus fares, accommodations, daily necessities and other expenses. The cost for a patient with a single joint problem is more than 65,000 yuan ($9,990), while for a patient with problems in two joints, it can be more than 150,000 yuan," said He.

"All these patients are in a good mood, as they have seen many successful cases in their hometown who have already recovered after surgery. They are not afraid of having surgery, and they all hope to get up and walk straight after recovery," she added.

"Treatment of these patients is challenging, as they are affected by other endemic diseases," she said. "We have been training more local doctors to deal with the disease in the future."

Lho Tenchok, an attendant who looks after the patients, said the project has brought many positive changes to their lives after recovery. He has witnessed many patients either work in the fields or go out for part-time jobs after recovery.

"Many people from Lhorong county suffer from Kashin-Beck disease due to their diet and drinking water source, such as the locally produced salt they have been eating since ancient times," said Lho Tenchok, adding that cases of the disease have declined in recent years thanks to government efforts to improve people's livelihoods.

"Those patients who received free medical treatment in the past can now walk and work independently," he said.

Lin Jianhao, director of the bone and joint department of Peking University People's Hospital, said in a China News Service report that it is better to send more medics to Tibet to learn more about the culture and the health conditions there, and this also would generate solutions for better treatment in the future.

Two doctors and a nurse from Lhorong County People's Hospital have been receiving training at Lin's hospital in the past year.

"Our hospital has also been sending medics to Lhorong county to aid local medical workers to deal with the disease, and they also provide remote assistance to them via the internet," Lin said.